IT park in Kyzylorda opens, aims to be centre for creativity, collaboration

By Raushan Shamsharkhan in Nation on 21 May 2018 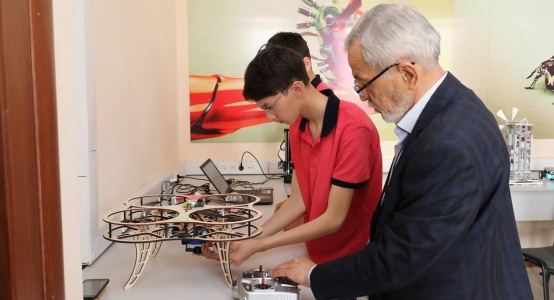 “The purpose of this park is the consolidation of IT specialists in Kyzylorda and their connection to real-life projects on digitisation. Demand for the IT specialty is growing, so they must be collected in one place,” Anton Bayev, the IT park developer, told kyzylordatv.kz.

Kyzylorda region Akim (Governor) Krymbek Kusherbayev got acquainted with the preparations for the IT park opening, noting the importance of the IT park’s work to the national programme for digitisation (at the day of presentation). The park will support the overall plan announced by President of Kazakhstan, Nursultan Nazarbayev, in his January 10 message on Kazakhstan’s fourth industrial revolution. It will also complement Kazakhstan’s national digitisation programme and plans to expand its technology sector. According to the Kyzylorda region budget, 121.8 million tenge (US$371,375) has been pledged for information technologies development in the region.

The IT park serves to support the region’s young digital talents as they grow their businesses, test new ideas and create new solutions. It will bring together young digital entrepreneurs from the area to an environment of work, life, rest and creativity. To date, the IT park consists of an information registration department; zones for work, study, rest, presentation and business negotiations; a tech laboratory workshop; a 3D studio; and a server room.

Conceptually, programmers, managers, designers, marketers, public relations specialists and other digital visionaries were invited to co-create new solutions. According to Indira Akzhigitova, deputy head of the technology department of the regional akimat, the creation of an IT park will promote the development of talented youth and innovative projects. Different laboratory simulators will be tested and their development, along with new software products and graphics projects in 2D and 3D, will help automate the work of the region’s various social and economic development areas.

“This is a new form of integrating science and production and a place where people turn their ideas into real things,” added Akzhigitova.

In January, a delegation from Kyzylorda region visited an IT park in Russia’s Republic of Tatarstan, active since 2009, and decided to implement such a project in Kyzylorda. The decision to create a Kyzylorda IT park was announced at the HackDay 2017 regional festival on 18 December 2017, where 500 participants presented their ideas, projects and developments on digitisation of the region’s various spheres of life. Kusherbayev said that another IT park would soon be created.

“On the left bank of the Syr Darya, in the new quarter of Kyzylorda, another youth IT park will be created. It will be a place for people obsessed with technology, where they can realise their boldest ideas. It is also a unique experience of communicating with like-minded people and specialists who create and develop their own products. Thus, everyone can release their creative potential and start moving in the right direction with an idea already worked out, with secure research and development facilities,” said Kusherbayev at Hackday 2017.