By Aigerim Seisembayeva in International on 28 May 2018

ASTANA – Eurasian Economic Union (EAEU) member states and China signed May 17 a trade and economic cooperation agreement, the first major arrangement between them. 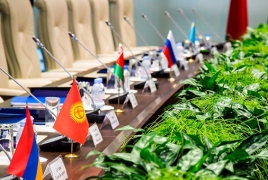 “The general provisions of the agreement are consistent with the World Trade Organisation principles,” said Eurasian Economic Commission (EEC) Board Chair Tigran Sargsyan, one of the signatories of the agreement. Sargsyan added that the document’s main feature is transparency.

The document was signed on the sidelines of the Astana Economic Forum – the Global Challenges Summit and creates a ministerial level joint committee and information centres for businesses.  It also facilitates cooperation between customs authorities and requires customs officials to provide explanations for delays of goods at the border.

The agreement also expands the use of electronic documents and the mutual recognition of electronic authentication methods as well as introduces measures to combat counterfeit products.

The parties outlined areas of cooperation such as agriculture, energy, transportation, industrial cooperation, technology and innovation, information and communications, finance and environmental issues.

“For instance, in the transportation sphere, we have already offered our Chinese colleagues to consider about 40 projects,” Sargsyan added.

He also said trade between the EAEU and China has reached $100 billion, with exports from the EAEU increasing 40 percent compared to the previous year.