By Aigerim Bulambayeva in Nur-Sultan on 23 May 2018

ASTANA – Aspiring young social entrepreneur Rakhima Mukusheva holds knitting classes in Astana, with the goal of helping her students master new skills, socialise and take baby steps into entrepreneurship upon the completion of the classes. 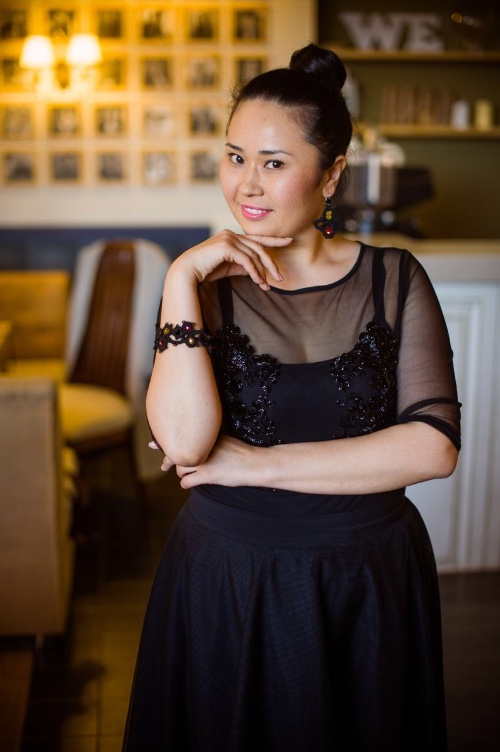 Although Mukusheva has established knitting classes and launched a promising social project, she sees herself above all as a mother of three sons and a wife. Family is not only a key element of Mukusheva’s self-identity, but also what brought her to the path she is on.

Born in Shalkar village of Tselinograd region, she grew up seeing and learning knitting skills from her grandparents, who were involved in sheep breeding. She also grew up witnessing people using such household skills to improve their lives, not just for fun.

“Knitting was my hobby for years, starting as early as my childhood. I assume that this path was laid out due to the 1990s, when our moms and grandparents used to knit to meet their own needs,” said Mukusheva.

“My first teacher was my mother. She taught me not only knitting, but also the craft of making yarn,” she noted.

Despite having all the premises and skills to become a professional knitter right away, she took a longer path.

“Upon completing high school, I, as most people do, continued my studies at the university. I received my bachelor’s degree in economics and finance from Akmola Agrarian University. However, I was not able to find a vacancy directly related to my educational background. I used to work as a salesperson, a company director’s assistant, et cetera. All those positions were not even remotely related to knitting. Once I lost my job, knitting helped me not only in making ends meet, but also in coping with the depression that followed my job loss,” Mukusheva recalled.

What started as a last-resort solution turned into a quite successful business.

“I started knitting at home just for my children. Then our guests, having noticed the items I knitted for the children, became interested in my products and made orders. At first, there was no profit in terms of money whatsoever. The transactions were based on barter: I would knit for them and they would supply me other goods in exchange,” she explained.

As her transition from hobby knitting to professional work was gradual and ambiguous, so was the establishment of her school.

“To be honest, I cannot tell when exactly and how our knitting school was established. At some point, people just started approaching me and asking to teach them knitting. What I can say for sure is that I have been in this sphere for at least three years,” said Mukusheva.

Once a month, Mukusheva recruits people who are willing to learn in beginner groups. A group consists of five to six people.

“We start from the very basics – students are taught the proper ways of reading a knitting chart and knitting specific patterns. Apart from those study groups, we often conduct specialised master classes,” she said.

“The main goal of our knitting school is bringing people together, enabling them to socialise. Another goal is cutting corners in a family budget at almost no cost,” Mukusheva said, She also hopes that the knitting school will contribute to increasing the share of domestically manufactured products in Kazakhstan.

Today, five individuals who went through her knitting programme are currently employed by Mukusheva in the framework of her social entrepreneurship programme. The total number of her former and current students exceeds 100.

At Mukusheva’s knitting school, classes for beginners cost 20,000 tenge (about US$60) per month, though individuals from socially vulnerable groups can take the classes for free. The only requirement is having a will to learn and to apply the acquired skills at work. Some graduates of the course may end up employed at the knitting school itself.

“I do follow my former students after they graduate from the knitting school. We have a chat that we use for networking, where we exchange information on available vacancies and other interesting opportunities,” said Mukusheva.

But then she met Emin Askerov, founder and executive of the Green Tal social workshop, and got acquainted with social entrepreneurship.

“I thought that, apparently, what happened to my father was fate,” Mukusheva recalled.

What distinguishes social entrepreneurship from the traditional type, according to Mukusheva, is that the former incorporates the ideas of personality and humanity in its definition.

Mukusheva shared her concerns as well as obstacles she faces as a knitting school director. One of the issues is that even though students are taught all aspects of knitting, they still find it hard to compete with large-scale producers.

As for her plans for the coming years, Mukusheva wants to further develop as a social entrepreneur, set up a production line and broaden her existing network.

She genuinely believes that the social entrepreneurship has great potential in Kazakhstan. “Do not be afraid of trying, do not be shy to ask for help, be ambitious, believe in people, and love people!” she said. “Genuinely loving people is the key, all the other things will follow.”