ASTANA – Almaty region and BI Group are reconstructing the capital’s Arai Park in conjunction with the city’s 20th anniversary. The project will present the region’s remarkable sites in one location, said project head Dauren Alzhasarov, according to Elorda Aqparat news agency. 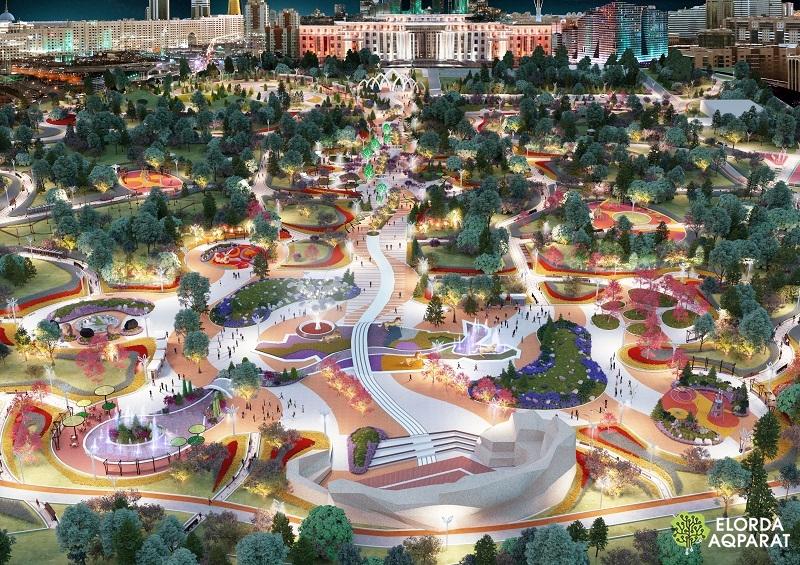 “The park will include an entrance with an arch, an alley with fountains and Aport Square (famous Almaty apples) with the symbols of Almaty region; they are hills that imitate the mountains, pavilions and yurts. Tengri Square will be constructed with playgrounds for children of different ages. There will be an ash tree alley and stones with Tamgaly Tas petroglyphs, as well as an amphitheatre built in the park. Moreover, Astana will have its own Sharyn Canyon,” he said.

Sharyn Canyon has been compared to the Grand Canyon in the United States as a monument of nature. Tamgaly Tas is located 120 kilometres from Almaty city and the cliff is known for its Buddhist inscriptions and ancient Turkic runic scripts.

The 15-hectare territory will be divided into four zones. The first will be for walks, the second designed as a central alley. Visitors with children can go to the third zone; the last will offer a food court and parking area. The park will also have 1.5-kilometre bicycle and running trails, and Alzhasarov noted the playgrounds for children with special needs will have no equal in the capital.

The project will have a map of Kazakhstan designed with grass, flowers and bushes. The area will be landscaped with 270 trees, including 85 apple, ash and anointing oil.

The park will turn over a new leaf with a new name and be known in the future as Zhetysu (Seven Rivers) Park. Zhetysu, the region on seven rivers flowing into Balkhash Lake, was the site where the Kazakh Khanate was established in the 15th century.

“There are plans to make a decorative stream that will flow on wooden flooring into Balkhash Lake. The Great Silk Road will pass through the park; a caravan will meet guests on the way near the entrance arch. The entrance will consist of seven arches symbolising Zhetysu,” said Alzhasarov.

Those who like roller skating can enjoy their time in the rollerdrome, which will double in winter as an ice skating rink, and guests will be able to rent skates, rollers and bicycles. Children can spend time on trampolines and in play areas, the latter with a rubber-covered wavy relief hill to reduce injuries.

A Wi-Fi tree will consume solar energy, providing Internet access and a charging station for electronic gadgets. A closed-circuit television (CCTV) system will be installed and 380 lanterns will illuminate the park at night. Organisers will repair the roads leading to the area and remove the fence along Arai and Saraishyk streets. The park will also have three modular toilets.

The 3-billion tenge (US$9.1 million) project, funded by the Almaty regional administration, will be completed by June 30. The opening ceremony will entertain guests with excursions, festivals, night shows, concerts and movies in an outdoor cinema.