By Aigerim Seisembayeva in Nation on 27 April 2018

ASTANA ­– The results of last year’s preventive visits to detention facilities were presented at the Kazakh Foreign Ministry April 26 as part of the second, two-day National Preventive Mechanism (NPM) forum, “Prevention of torture through joint efforts of national human rights institutions and the NPM.” 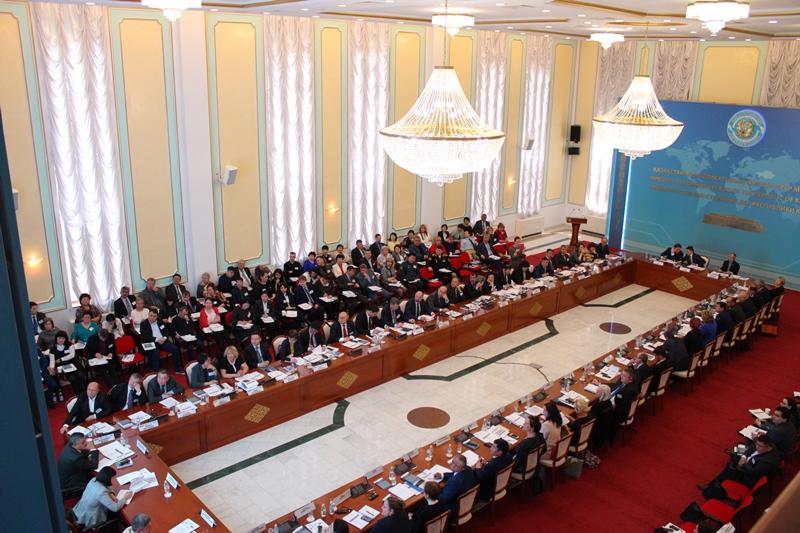 The NPM’s fourth consolidated report contains an analysis of human rights observance in the facilities of the nation’s National Security Committee and Internal Affairs, Defence, Healthcare and Education and Science ministries.

The forum was attended by more than 100 NPM participants from the country’s 16 regions, government officials, human rights activists from Central Asia and Europe, international experts and representatives of non-governmental organisations. They not only discussed Kazakhstan’s torture prevention efforts, but also shared their countries’ experiences.

The event, hosted by Kazakhstan’s Ministry of Foreign Affairs, was organised by the country’s Human Rights Commissioner’s Office with the support of the European Union, Council of Europe, Organisation for Security and Co-operation in Europe (OSCE) programme office, Penal Reform International and the United Nations High Commissioner’s Office for Human Rights, Development Programme (UNDP) and International Children’s Fund (UNICEF).

Speaking at the forum, Kazakh Human Rights Commissioner Askar Shakirov said NPM participants conducted more than 500 preventive visits to mandated institutions in 2017 which resulted in substantive and relevant recommendations to institutional administrations and local and central governmental bodies on ways to improve their work in preventing torture and cruel treatment and punishment.

The report states the number of NPM special visits (in addition to preventive visits) increased from 15 to 24 cases compared to 2016. Most visits were made based on complaints about penitentiary institutions. All information about detected facts of torture or cruel treatment were transferred to the Prosecutor General’s Office. The document also notes the need to introduce a special form of public report to investigate such cases.

It added most of the recommendations in the previous year’s report were implemented by the governmental bodies in charge of the mandated closed institutions. Their activities indicate a readiness to implement the recommendations presented in the report, according to the ombudsman. He added the NPM activity is one of the most convincing examples of constructive interaction between governmental bodies and the civil sector, including executing international standards in human rights.

Deputy Foreign Minister Roman Vassilenko noted Kazakhstan was one of the first countries to accede to the UN Convention against Torture and has made considerable progress in its prevention.

“Kazakhstan’s progress in this sphere is reflected in the World Justice Project’s Rule of Law Index, where our country climbed from 74th position in 2012 to 64th in 2018,” he said.

Deputy Prosecutor General Marat Akhmetzhanov noted the Kazakh prison population has been decreasing in recent years due to consistent efforts aimed at humanising the prosecution system and has decreased by 1,000 in the first quarter of 2018 alone.

“Gradual humanisation of legislation is taking place. A new law on modernising the criminal process was adopted this January. It includes measures to increase the competitiveness of parties of the judicial process and strengthen judicial control, as all sanctions were transferred to the court and the rights of lawyers were expanded. They are now equal to the rights of the prosecutors. The time of detention of suspects was also reduced from 72 to 48 hours and to 24 hours for minors. These measures resulted in a reduction of the prison population by 1,000 people in the first quarter of this year alone,” he said.

Akhmetzhanov added in the past four years, the number of prisoners has decreased from 49,000 to 35,000 and eight old-style colonies were closed. In the World Prison Brief, Kazakhstan improved its positions from 35th to 73rd in terms of prison population rate, with the higher figure indicating fewer number of inmates per 100,000 of the general population.

He noted 85 percent of complaints about torture and unlawful investigation methods are registered at the pre-trial investigation stage. As a result, the Prosecutor General’s Office is in the process of developing a new bill that will reduce the harshness of criminal law.

“The concept of the bill provides that only those who constitute real danger to the society are to be isolated, but other persons who commit non-violent grave crimes will be punished without being isolated from society. Despite the large-scale humanisation, these measures did not involve crimes related to torture. On the contrary, we are increasing the responsibility for torture and strengthening the guarantees of victim protection,” said Akhmetzhanov adding that those convicted of torture, and there have been 24 such convictions of officials in recent years, are not eligible for reduction of sentence or early release due to amnesty.