ASTANA – Kazakhstan, which has always promoted peace and dialogue between different nations and religions, is preparing for the Congress of Leaders of World and Traditional Religions in October. The Spiritual Administration of Muslims of Kazakhstan (SAMK) plays an important role in interfaith dialogue, promotes unity and addresses the challenge of extremism, says SAMK Deputy Chair and Naib (first deputy) Mufti Alau Adilbayev in an interview with The Astana Times. 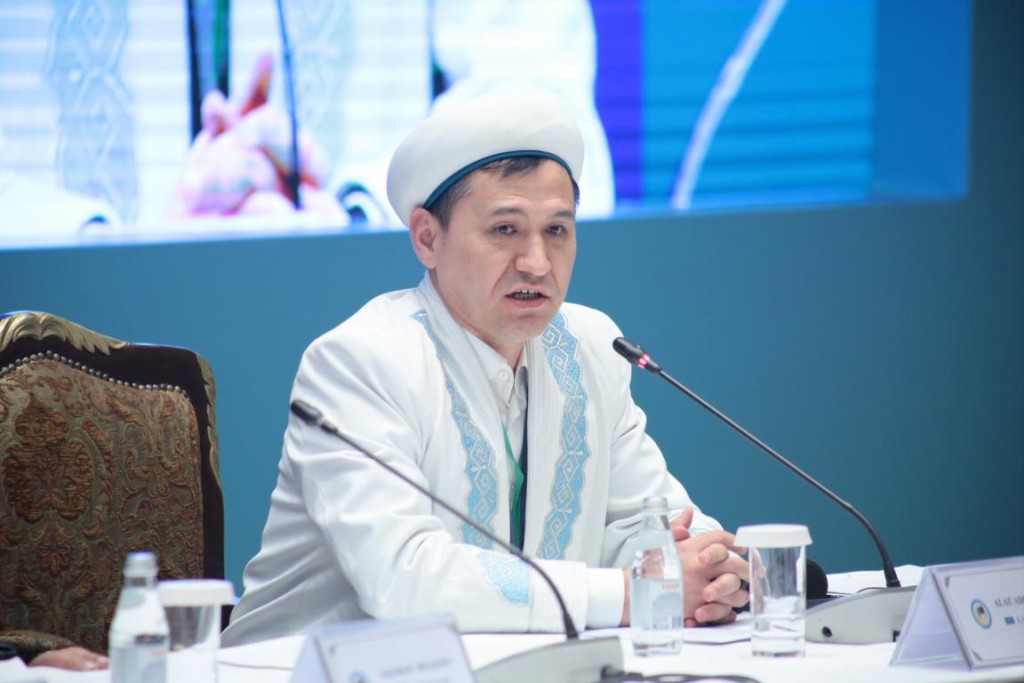 “Kazakhstan has presented itself as a peace-loving country creating favourable conditions for around 140 ethnic groups and many confessions to co-exist and live peacefully. One of the most successful examples is the Congress of Leaders of World and Traditional Religions taking place every three years in Astana since 2003 and supported by religious leaders and eminent politicians,” he said.

“We also always interact with representatives of different religions and confessions in order to promote peace and stability nationwide. It is important to note that the word ‘Islam’ itself means peace and the first meeting of Abrahamic religions took place during the times of Prophet Muhammed in 622 in Medina,” he added.

Islamic customs and traditions have historically played a key role in the lives of Kazakh citizens, who refer to Islam from early childhood and during major events such as marriage, the birth of a child or death of a relative or friend.

“Some people also find answers in Islam to fundamental questions about life, death and justice. A lot of people attend courses on the Holy Quran, Arabic language and religious knowledge held in mosques. Moreover, our mosques are often full with visitors during Friday prayers and people even have to pray outside the mosque sometimes. Religious literacy is also on the rise nowadays, partially due to the active work of imams (Islamic mosque leaders), widespread access to Internet resources and the work of the Asyl Arna religious TV channel,” said Adilbayev.

With the increasing interest towards Islam, there is also the threat of Kazakh people being involved in destructive currents.

“We need to revive the traditional religious attitude of the Kazakh people which was shaped throughout centuries in order to preserve unity and prevent the spread of destructive currents. Special attention is paid to Islam in Kazakhstan: history, traditions and ways to develop projects meant to increase religious literacy and promote unity among believers,” the mufti said.

“As President Nursultan Nazarbayev addressed in his Rukhani Zhangyru (Modernisation of Kazakhstan’s Identity) programme, it is important to revive all the good virtues Kazakh people have had historically in national culture and adapt them to modern conditions. We believe national culture is based on religious values and therefore, our main objective is to identify those values, apply them in accordance with time requirements and shape new Muslim identity,” he added.

Considerable emphasis is also put on developing the professional competency of imams in an attempt to increase religious literacy and combat radicalism.

“The overall level of religious literacy is rising among the population. Therefore, it is important for imams to be able to answer questions, correctly explain the religion and take preventive measures against radicalisation and potential religious misunderstandings,” said Adilbayev.

“To date, there are 2,563 mosques nationwide with 4,415 employees. A fifth of them, or 21 percent, have completed higher education, whereas 18 percent have certificates of secondary education. The other 61 percent have only passed religious courses. Our main strategic task is to increase the number of imams with higher education,” he added.

Some imams, however, are unwilling to work in distant rural regions due to specific social conditions and lack of funding and SAMK is working on a special programme to attract qualified leaders to remote areas. Thus, 305 imams in rural mosques are now provided with a constant salary from the Uakyp Foundation, established with the support of President Nursultan Nazarbayev to prevent radicalism and extremism.

“We have also specified a process for imams to prove their competence. During the last three years, 3,800 imams took exams and 124 imams resigned in 2015 due to poor performance. The Islamic institute for imam qualification upgrading in Almaty, established in 2001, has provided training for more than 2,000 imams from Kazakhstan, Russia and Mongolia,” said Adilbayev.

SAMK also sends imams abroad for trainings and courses; 50 have visited Al-Azhar University in Egypt and 30 are annually sent to Turkey.

May 16 begins the holy month of Ramadan, when Muslims fast during the daytime and indulge in prayers and good deeds.

“Ramadan, the month when the Holy Quran was revealed, is also a month of mercy and generosity and is the perfect time for reflection. During Friday prayers, the plans are to give sermons on important social topics such as how to improve one’s personality, get rid of bad habits and traits and the importance of helping people in need,” he noted.

Banners congratulating people on Ramadan will be placed in public places and transported with the approval of authorities. Booklets and leaflets will be distributed to provide more information and encourage fasting. Throughout the month, the whole Quran will be recited during tarawih (night prayers during Ramadan).

“All the initiatives are meant to promote inner stability and unity within the nation,” added Adilbayev.