By Anuar Abdrakhmanov in Sports on 5 April 2018

ASTANA – The bout between Kazakhstan’s Gennady Golovkin, the WBC, WBA (Super), IBF and IBO belts holder, and Mexican Saul Alvarez, has been officially called off. 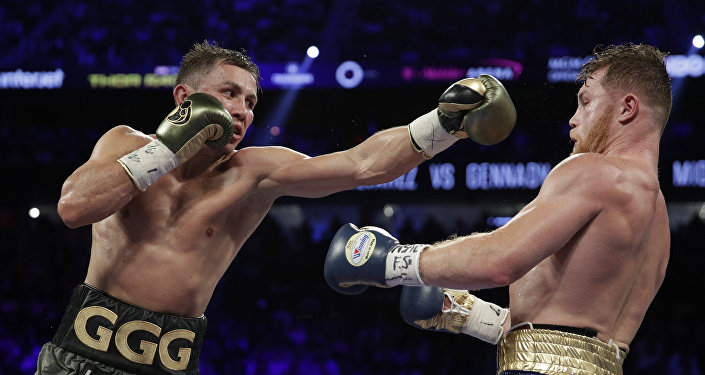 The rematch, which was scheduled for May 5, was cancelled by the Mexican boxer. This was announced at a special press conference by President of Golden Boy Promotions Eric Gomez.

Golden Boy Promotions received a notice from the Nevada Athletic Commission (NSAC) that Saul Alvarez would likely not be allowed to fight on May 5. Earlier, the NSAC suspended Canelo from fighting due to finding a banned drug clenbuterol in his doping test.

Gomez also said the rematch between Saul Alvarez and Gennady Golovkin can take place in August or September, but the decision can be made only after the NSAC meeting, which is scheduled for April 18.

“Golovkin wants to fight on May 5 in Las Vegas, so we should undergo an official procedure within the commission. We ask those who ordered tickets to Las Vegas or planned to come there for the Golovkin’s fight not to cancel their plans, because we are planning a fight on May 5. The opponent will be determined later,” said Loeffler.

“The talk that the fight would be off has been going on for a while. They said fans started to return tickets, and TV channels refused to pay for the match broadcasts. So, I think it was expected. Another thing is that there are still a lot of questions. Why did this happen, and who is to blame for this? I think that Golovkin’s team did everything to wait for a more suitable moment and get better terms of the contract for the fight, to negotiate on the details regarding judges for this fight. The fight may take place in 5-6 months. Now Golovkin needs to have a fight on May 5 to keep in shape. It’s hard to say who will be Golovkin’s opponent on May 5, but I hope there won’t be any talks that Gennady picked up a weak opponent. This should also be considered,” said a well-known Kazakh expert and Vice-President of the Professional Boxing Federation of the Republic of Kazakhstan Viktor Demyanenko.

The first bout between Golovkin and Alvarez took place on Sept. 17, 2017, in Las Vegas and ended in a draw. Golovkin defended the world champion titles according to the World Boxing Association (WBA, “super”), the International Boxing Federation (IBF) and the World Boxing Council (WBC) in the up to 72.6 kg category.