By Zhanna Shayakhmetova in Astana on 28 April 2018

ASTANA – An exhibition dedicated to the Smurfs’ 60th anniversary was held at the capital’s School Children’s Palace April 26-28 as part of the Francophonie Spring Festival. The event was organised by the Belgian Embassy with the support of the Alliance Française offices in the city and Almaty. 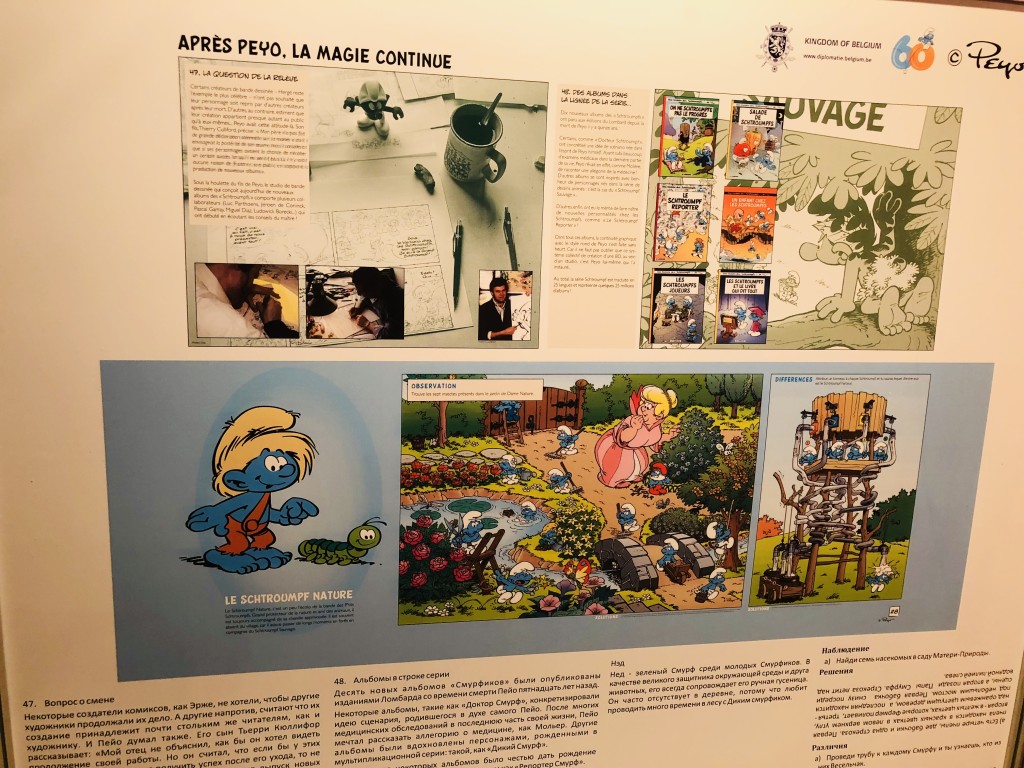 Belgium was proud to arrange the festivities, said Ambassador Alexis de Crombrugghe de Picquendaele in his remarks at an April 25 reception to launch the exhibit. Located on the border between two great European cultures, Germanic and Romanic, Belgium shares cultural diversity with Kazakhstan, he noted.

“It is therefore not surprising that cartoons were so successful in our country. Beyond Hergé, our most famous author with his hero Tintin, the Smurfs of Peyo, alias Pierre Culliford, became by accident the world famous little blue men. The Smurfs are well known for their jokes. These reflect a form of innocence which is familiar to those who kept a child’s soul. Their adventures are also marked by values which have a universal resonance. It is not surprising that these little men found an echo in so many countries, be it through albums of comic strips, which my generation read, or through animated cartoons which were viewed by younger generations,” he said. 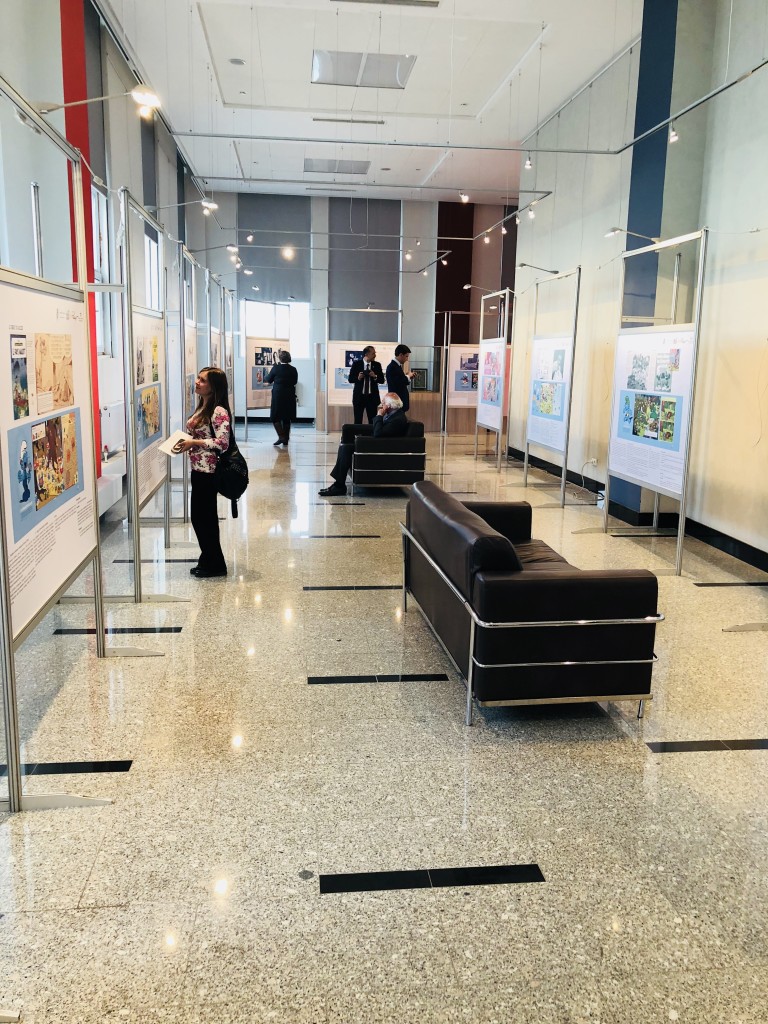 There’s no secret to the Smurfs popularity, as the characters are close to people and promote ideas of humanism, noted Kazakh Deputy Foreign Minister Roman Vassilenko in his trun. Family ties and friendship are essential to them.

“Today we celebrate the 60th anniversary of the Smurfs, a truly global phenomenon born in Belgium in 1958. At least three generations of children fell in love with these little blue creatures in white clothing thanks to distinguished Belgian artist Pierre Culliford. They are still capturing the hearts of millions of children in Belgium, Kazakhstan and all around the world. More than 300 million Smurf figurines have sold worldwide,” he said.

The first Smurf short story appeared in “Spirou” in 1959. Their inaugural film, “The Smurfs and the Magic Flute,” was produced in 1975.

The cartoon series began airing on NBC in 1981, with Hanna-Barbera Productions producing 272 episodes in eight consecutive seasons. The Saturday morning show reached 42 percent of the U.S. audience and had a higher rating than “Dallas,” the nation’s popular primetime soap opera.

Art gallery historian Madina Dosamanova noted the cartoon timeline could teach children to learn about and appreciate their culture. 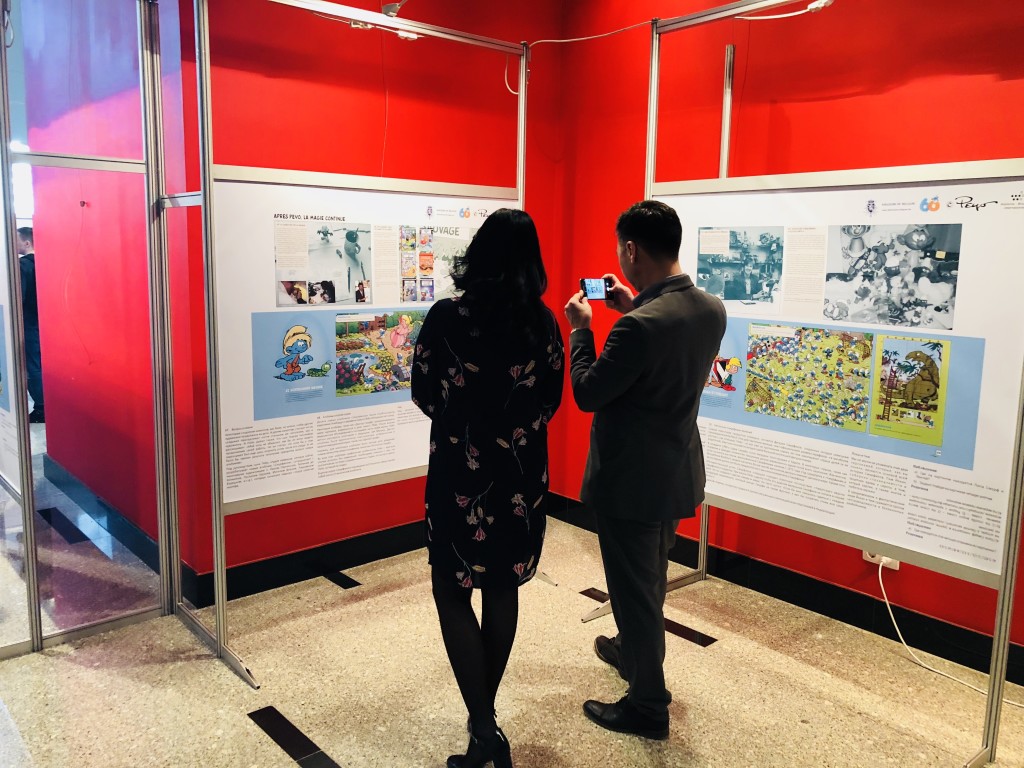 “We are glad to host such a wonderful exhibition. The master classes and other events will also be held here in the next three days,” she said at the launch of the exhibition. The volunteers will teach children how to draw and talk about the history of comic books. Our gallery is open for cooperation as we create a special atmosphere for people to talk about arts and promote our artists, too.”

Sixty-four events were scheduled in March and April as part of the Francophonie festival to celebrate the cultural revival and creative spirit of the French language and cultural diversity of French-speaking countries.