By Aigerim Sadykova in Business on 28 March 2018

ASTANA – The 2015-2019 State Programme of Industrial and Innovative Development (SPIID) has contributed to increasing the manufacturing industry volume by 5.7 percent while raising industry exports by 10.5 percent last year compared to 2015, said Minister for Investment and Development Zhenis Kassymbek during the March 27 government meeting. 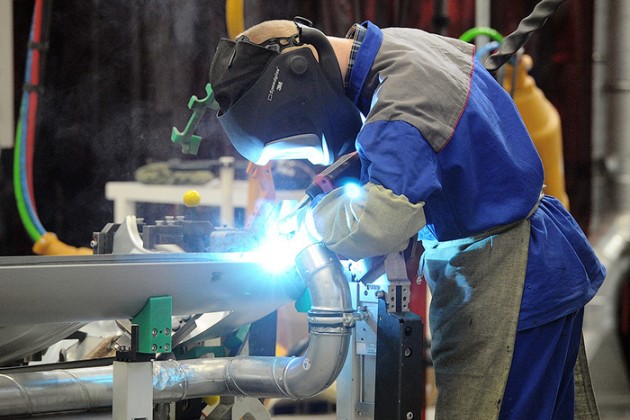 Kazakhstan’s manufacturing products are exported to 122 countries. The nation is among the top five suppliers and occupies an 8-percent share of the imports to Central Asia countries. Supplying products to neighbouring countries grew by 30 percent, or $1.5 billion.

In the last three years, SPIID has generated 378 projects worth $9.4 billion, resulting in 30,000 jobs. The ministry added 150 new projects valued up to $3.1 billion, creating 15,000 jobs by the end of the year. A Prommashkomplekt railway wheels production complex and Asia Steel Pipe Corporation factory manufacturing large diameter welded pipes are among the projects, according to Kassymbek.

He noted the ministry has initiated the industrial-innovative development concept for 2020-2024 and will finish the work by the end of the year. While in the drafting phase, Sagintayev suggested Kassymbek consider possible new technologies.

Despite the good results and manufacturing industry growth, its share of the economy has not exceeded 11 percent in recent years, he added.

Minister of National Economy Timur Suleimenov and Minister of Energy Kanat Bozumbayev summed up SPIID’s results for 2017. The former noted the quality of the programme planning, as SPIID indicators were not revised, achieving 78 percent of their goals.

The second stage of reconstructing and modernising the Shymkent oil refinery will end this year, increasing the refining depth to 87-90 percent, said Bozumbayev.

A polypropylene production plant with a capacity of 500,000 tonnes and six major projects will be implemented in the energy sector. The Pavlodar oil refinery was also modernised.

Up to 100 projects were included in regional business maps, but not all of them follow the industrialisation priorities and need to be under the control of the National Economy and Investment and Development ministries, said Sagintayev.