By Staff Report in International on 22 March 2018

ASTANA – Cosmonauts and astronauts heading into space for the first time from Kazakhstan’s Baikonur Cosmodrome traditionally plant a tree on Cosmonauts Alley, the avenue in Moscow leading to the Russian Cosmonautics and Conquerors of Space museums. The International Space Station (ISS) Expedition 55-56 crew aboard the Soyuz MS-08 spacecraft followed the custom before their flight scheduled for March 21. 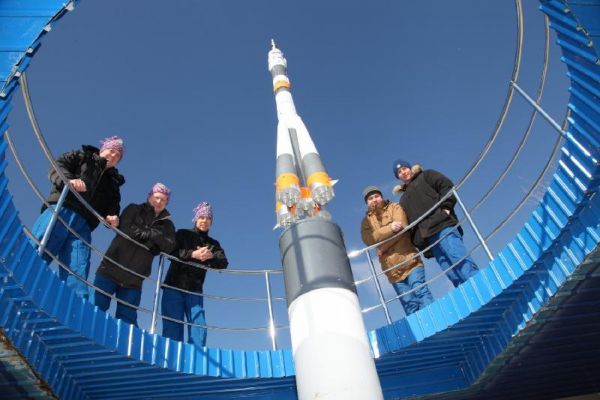 Arnold and Feustel, making their inaugural flights from Baikonur, planted their seedlings on the historic street. Artemyev’s tree has been growing since 2014. During his initial flight, the expedition’s commander spent 169 days in space and completed two spacewalks.

The original tree on Cosmonauts Alley belonged to Yuri Gagarin. He performed the world’s first manned flight from Baikonur on April 12, 1961.

Soyuz MS-08’s main and backup crews held a flag raising ceremony at Baikonur’s 17th site during the March 15 journalists’ visit. They demonstrated how the spacecraft reaches ISS in manual mode and showed the processes for on-board documentation studies and sports training. The crews must complete drills to solve possible emergencies that could occur during the flight, including a fire on board the spacecraft.

American astronauts have experience in space flights, according to the Roscosmos press service. Feustel, a geophysicist, was selected as a NASA astronaut candidate in July 2000. He has been in space for 28 days aboard the Atlantis (STS-125) and Endeavour (STS-134) space shuttles, spending 42 hours, 18 minutes in open space on six walks.

The state commission on manned space flight testing approved the decision to use Soyuz MS-08. The spacecraft, with a Soyuz-FG rocket, launched from Gagarin’s Start at 2344 hours Astana time on March 21.