By Zhanna Shayakhmetova in Nation on 9 March 2018

The Khanbekgul farm, which includes 500 heads of small and large cattle, launched a wind turbine in 2015 in Shetpe village that provides 15 kW of combination of wind and solar power.

The wind-solar power system includes solar panels and helium accumulators. If there is no sun or wind, power is provided by energy stored in batteries. The power plant has a high coefficient of installed capacity up to 43 percent.

“We always have electricity due to this system. Water is provided from the water well supply located 500 metres from the farm. It would be difficult to manage the farm without this equipment in a remote area,” said the farm owner. 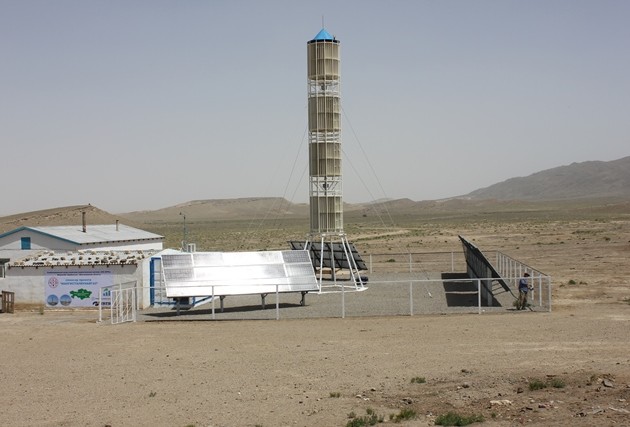 The Greenhouse E.C.O. company also plans to launch three hectares of greenhouse fruit and vegetable production using renewable energy sources in the Batyr village of the Munaily district, according to Kapital.kz.

The 1.2-billion-tenge (US$4 million) project will be completed this year and will include storage rooms and refrigerating chambers.

The company also plans to grow vegetables and fruits in the open ground.

“We will build wind generators to provide electricity to the entire greenhouse facility. We plan to increase the announced areas of the greenhouse complex until 2020. Therefore, the energy of renewable sources will be in demand in any scenario,” said project manager Farid Sadykov.

The Greenhouse E.C.O. will also introduce a drip irrigation system to save water, fertiliser, labour costs, and electricity, to provide an early harvest and to prevent soil erosion.

The region is home to approximately commercial 1,560 farms with approximately 56,000 residents engaged in private farming for their own needs.