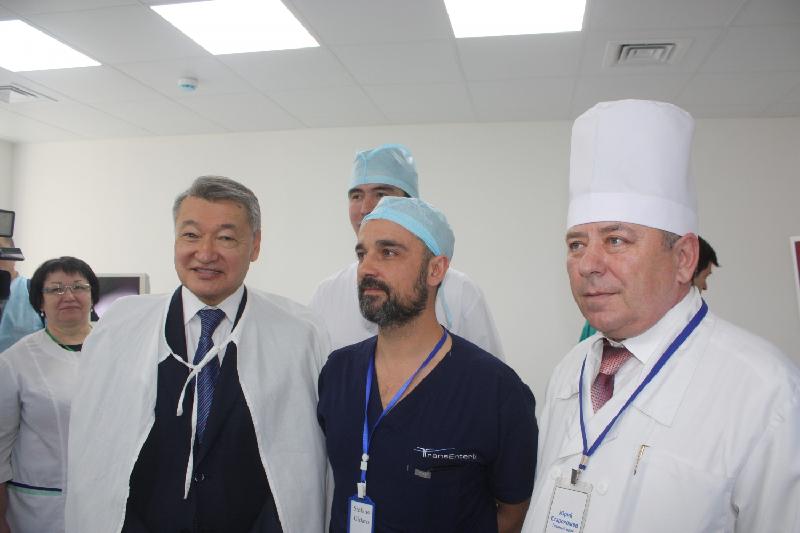 Robotic surgery refers to a minimally invasive operation that, unlike traditional open surgeries, make small incisions with the help of robotic devices resulting in a less blood loss, minimal pain after a surgery and faster recovery.

Gidaro commended the work of local surgeons stressing the importance of coherence in team work. He was invited to Kazakhstan as a surgery consultant to North Carolina-based TransEnterix company that supplied the robotic equipment to Ust-Kamenogorsk hospital. He has been teaching the use of innovative equipment to specialists across Europe and Asia.

Turakhanov and Muzdybayev completed an internship in Milan last year in December. The training of local specialists is envisioned in the agreement of equipment purchase and does not stipulate the allocation of additional funds from the budget. Four Kazakh specialists were trained abroad and another four are expected to be taught in the near future.

In Ust-Kamenogorsk, Gidaro is expected to take part in a wide range of surgeries, including ventral hernia, kidney cyst, appendectomy and cholecystectomy. The Italian professor will continue training the specialists in Kazakhstan for the next two weeks.

Two or three surgeries will be performed per day, said East Kazakhstan Regional Health Department Head Marat Shoranov. One more robot-assisted surgery was conducted the same day by Turakhanov and Muzdybayev with Gidaro’s assistance, he added.

Head of Surgical Unit in the hospital Sergei Belykh said the surgeons might switch to a traditional open surgery in the process in case complications arise.

East Kazakhstan Region Akim (Governor) Danial Akhmetov congratulated the surgeons on a successful completion of the innovative surgery and expressed confidence in the region turning into the nation’s leader in high-level medicine in the next three years.

The opening of the centre, he noted, is an “example of an innovative approach.” In the future, the centre will be cooperating closely with national science and research centres in Almaty and Astana and medical university in Semey seeking to amalgamate treatment, science and education into a single model of an innovate healthcare system.