By Staff Report in International on 11 March 2018

ASTANA – On the day of the 26th anniversary of Kazakhstan’s accession to the United Nations – March 2, an official ceremony for signing the Treaty on the Prohibition of Nuclear Weapons by Kazakhstan took place at the UN Headquarters. 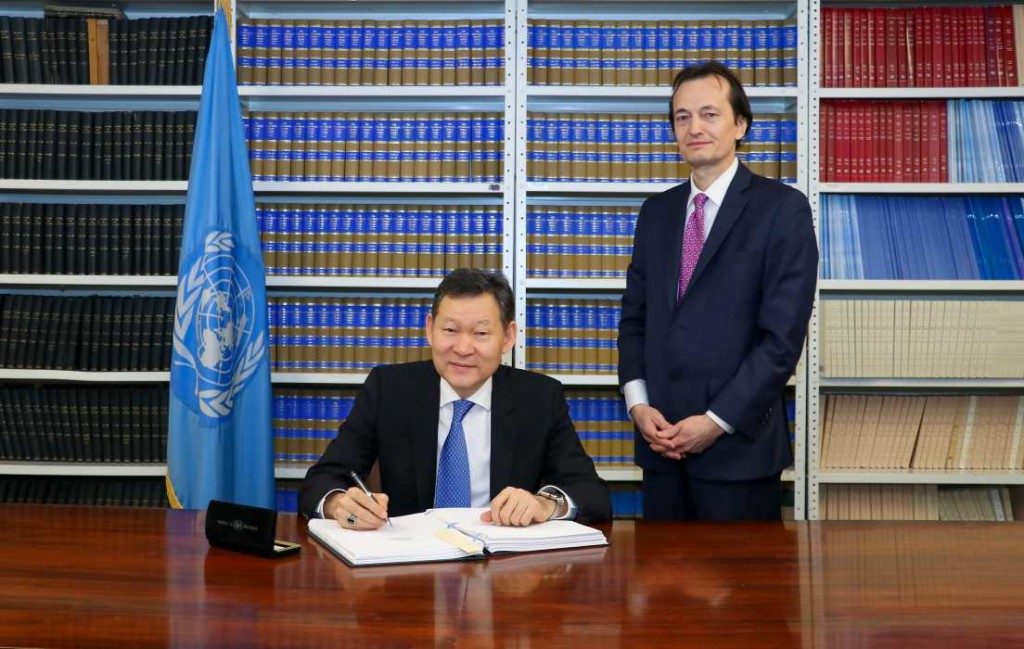 Permanent Representative of Kazakhstan to the United Nations Kairat Umarov signed the agreement.

Kazakhstan had participated in the elaboration and adoption of the treaty, which became the first legally binding document in the history of nuclear disarmament. Its main provisions are in line with the principled position of Kazakhstan, which has taken a path of becoming a leader in nuclear disarmament and non-proliferation after being a one-time holder of the world’s fourth nuclear arsenal.

“This was inspired by the historical decisions of President Nursultan Nazarbayev, in particular, on the closure of the second largest nuclear test site and renunciation of the nuclear legacy of the Cold War. Our country’s denuclearisation was not an accidental decision, but a well-considered and thoughtful act by a responsible state that had learned the horrors of nuclear tests, which have resulted in the suffering the worst possible consequences, subsequently even in the third generation,” reads the statement from the Ministry of Foreign Affairs.

Despite the unwillingness of a number of states, including the de jure and de facto nuclear powers, to disarm, the Kazakh President continues to tirelessly urge the world community to achieve a world free of nuclear weapons, the statement said.

“The strength is not in nuclear bombs and missiles. The trust of the world community is a real defence,” said the Kazakh President at the Security Council stressing that only nuclear disarmament and confidence-building measures through the complete elimination of nuclear arsenals constitute the only and absolute guarantee against the use or threat of use of nuclear weapons.

The President also noted that the nuclear weapons states bear the highest responsibility to humanity for preventing nuclear catastrophe.

“It is the largest nuclear powers that should be in the lead of the struggle for a nuclear weapons-free world and set an example by reducing WMD. This does not mean that the rest of the countries should stand by and that their actions are irrelevant”, said Nazarbayev.

On the other hand, he stressed, if the largest nuclear weapon states insist on keeping their nuclear status and modernising their weapons, while prohibiting other countries from acquiring nuclear weapons, this will not lead to positive results.

Convinced that mankind in the 21st century is able to travel the path to a world free from the threat of weapons of mass destruction, Nazarbayev called “for joint efforts in this direction”. He also reminded the audience of the special role of the Security Council and its historical mission in building a safer world and a just world order as stated in the UN Charter.

The Treaty on the Prohibition of Nuclear Weapons was adopted July 7, 2017 with the support of 122 UN Member States. It was the outcome of two sessions of a UN Conference to negotiate a legally binding instrument to prohibit nuclear weapons, leading towards their total elimination. The conference took place on March and June-July 2017 in New York. It was open to the participation of all UN member states. However, nine de facto and de jure nuclear weapons possessing states and their allies boycotted these talks. To date, the treaty has been signed by 56 states, five of which have ratified it. Kazakhstan has become the 57th signatory state. The treaty shall enter into force 90 days after the fiftieth instrument of ratification has been deposited.