ASTANA – Kazakhstan improved its ranking nine spots to 122 and was removed from the list of the world’s most corrupt countries on the recently released 2017 Corruption Perception Index (CPI).

The index is published by Transparency International and analyses the perception of corruption across 188 countries. Nations are ranked from 0 to 100 points with zero being the most corrupt.

“Kazakhstan, which has been included in the rating since 1999, for the first time gained 31 points and because it passed the threshold of 30 points, it is no longer on the list of most corrupt countries,” said a Kazakh Agency for Civil Service and Anti-Corruption press release.

New Zealand and Denmark top the 2017 list with 89 and 88 points respectively. Somali, South Sudan and Syria rank the lowest. No countries received a perfect 100 score. Finland, which used to rank the highest, dropped four points from 89 in 2016 to 85 in 2017. 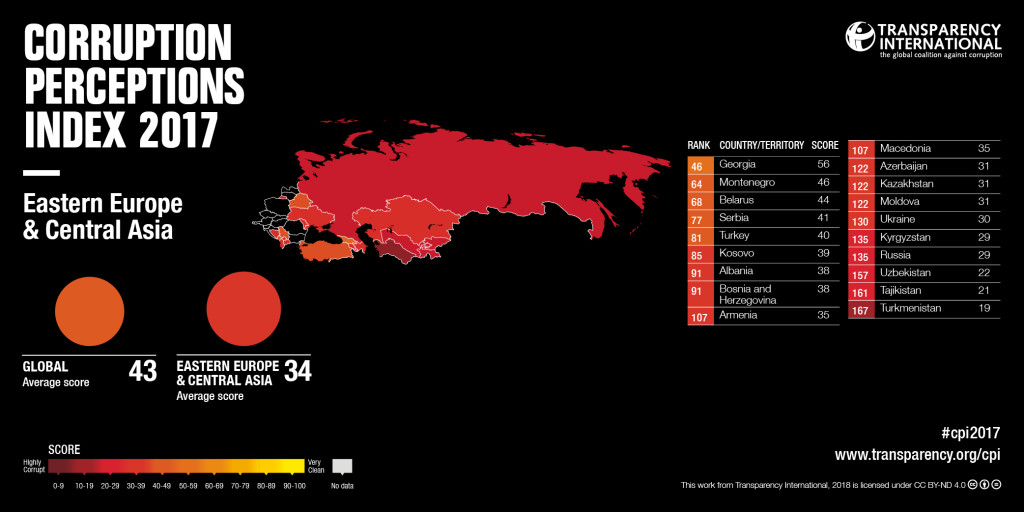 “This could be attributed to indistinct borders between public and private interests, where some people holding public office are not always maintaining a proper culture of recusing themselves from decisions that may affect them,” said the report, explaining the worsening perception of corruption in Finland.

The alarming trend, according to the report, is the poor performance of more than two-thirds of the countries receiving lower than 50 points at 43 points on average. Though some countries, including Côte d’Ivoire, Senegal and the United Kingdom, have made progress in combating corruption, most still show little or no progress.

“Since 2012, 368 journalists died while pursing stories and 96 percent of those deaths were in countries with corrupt public sectors, i.e. where CPI scores are below 45,” said the report.

National regulations restricting civil society from expressing opinions and crackdowns on journalists are among the fundamental obstacles in curbing corruption, according to the report. Governments are also recommended to make “public interest information” more accessible to activists, journalists and other members of the community to “identify corrupt conduct.”

“The CPI results correlate not only with the attacks on press freedom and the reduction of space for civil society organisations,” said Transparency International Chair Delia Ferreira Rubio, as reported by the organisation’s press service.

“High levels of corruption also correlate with weak rule of law, lack of access to information, governmental control over social media and reduced citizens’ participation. In fact, what is at stake is the very essence of democracy and freedom,” she added.