By Elya Altynsarina in International on 17 March 2018

A meeting with the President of Indonesia Joko Widodo was a central event of Chairman of the Senate of the Parliament of Kazakhstan Kassym-Jomart Tokayev’s official visit to Indonesia in mid-March.

On behalf of Kazakh President Nursultan Nazarbayev, Tokayev invited Widodo to visit Kazakhstan in October 2018 and participate at the 6th Congress of Leaders of World and Traditional Religions. Extending the invitation to Widodo, the speaker of the senate underlined that throughout these years, the congress has become a helpful dialogue platform for not only spiritual, but political leaders to gather and share their views on issues of common interest. 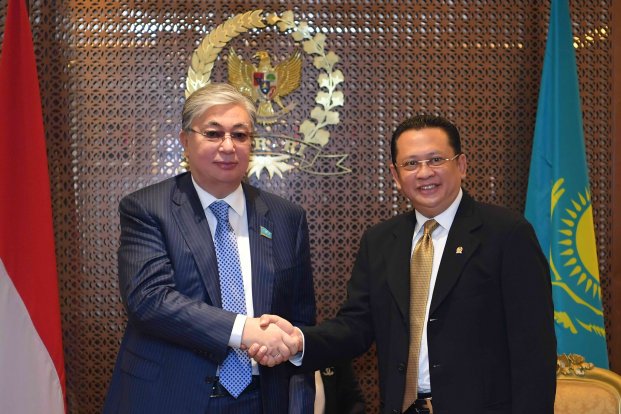 He believes that the representation of Indonesia – the largest and a respected Muslim country – personally by its President would greatly contribute to the success of the 6th congress that will devote this year’s meeting to a topic Religious Leaders for a Safer World.

Speaking about bilateral relations between Kazakhstan and Indonesia, Tokayev focused on the importance of this leading the Southeast Asian nation to Kazakhstan in the field of trade, economic and interregional partnership as well as cultural, humanitarian and inter-parliamentary cooperation. In recent years, there has been a steady growth in these fields of interaction. Moreover, the launch of transport and logistics routes within the framework of Kazakhstan’s Nurly Zhol infrastructure programme and the Chinese Belt and Road initiative are expected to help promote economic and trade relations. Kazakhstan expects the Kazakhstan – Lianyungang Port (China) – Seaports of the Asia-Pacific Region corridor to bring major trade and transit opportunities.

According to the Senate press service, at the high-level meeting with Indonesian officials, Tokayev praised the rich experience of the host country in Islamic finances – an area of great interest for Kazakhstan as the country embarks on offering international financial services at the premises of newly established Astana International Financial Centre (AIFC). “We invite Indonesian institutions to work at AIFC,” said Tokayev.

Concluding the meeting, Widodo thanked Tokayev and President Nazarbayev for such consideration and shared his intention to take measures for the expansion of political, economic and cultural ties between the two countries.

Tokayev then met with Indonesian colleagues led by Chairman of the People’s Consultative Assembly of Indonesia Zulkifli Hasan and Speaker of the People’s Representative Council Bambang Soesatyo to discuss prospects of inter-parliamentary relations.

Tokayev discussed the strong features of the legislative procedures of the two countries and emphasised the latest social initiatives of the Kazakh President and the country’s programme of identity modernisation. It has been noted that the role of parliaments in enhancing the international cooperation is critical. Following the meetings, the Kazakh delegation was invited to visit the National Independence Monument and the Taman Mini Indonesia Park in Jakarta.