By Elya Altynsarina in International on 27 March 2018 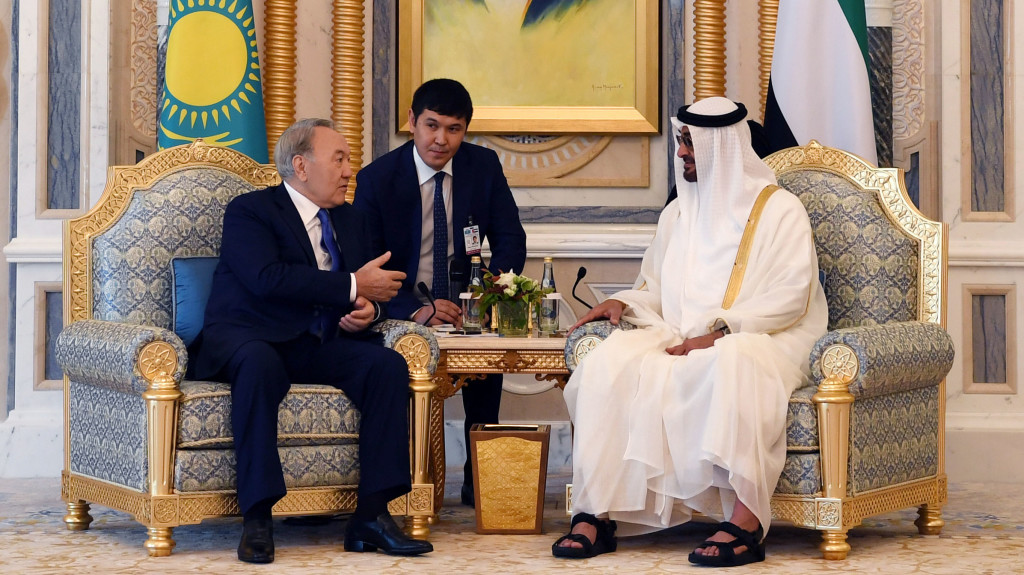 According to the Akorda press service, the expanded meeting explored cooperation in investment protection, space technology, hydraulic power, petrochemicals, agriculture and digitisation, as well as tourism and trade. The latest agreement on mutual visa-free travel between the countries, which entered into force March 10, is designed to impact relations and implement perspective deals.

The two leaders also emphasised the importance of enhancing efforts for regional and global peace and security by promoting dialogue and peaceful cooperation.

Nazarbayev hailed the UAE’s growth and achievements, noting how the efforts of its leadership ensured the country’s leading position in global development. He also paid tribute to the nation’s late founding father Sheikh Zayed bin Sultan Al Nahyan, whose 100th anniversary will be celebrated this year.

Underlining the positive dynamics of Kazakh-UAE cooperation and the importance of bringing it to new heights, Nazarbayev expressed confidence the friendly ties between the people of the two countries will continue to deepen.

“In 2017 alone, thanks to the implementation of bilateral agreements trade has doubled from $374 million to $643 million and [it has grown] six times since 2015,” he added.

The Crown Prince noted UAE President Sheikh Khalifa Bin Zayed Al Nahyan is eager to boost cooperation and communication based on a policy of mutual respect, confidence and interest. He added he is prepared to expand cooperation in multiple fields.

The visit included signing several agreements, mostly in investments and economy. Kazakh Minister of Investment and Development Zhenis Kassymbek and UAE Minister of State for Financial Affairs Obiad Humaid Al Tayer inked an Agreement between the two governments on the promotion and mutual protection of investments.

For the past four years, DP World has been providing services to the country’s main terminal on the Caspian Sea at Aktau and at Khorgos, one of the main transit points of Eurasia, strategically located on the Kazakh-Chinese border.

The other agreements, which provide for setting up a polyethylene plant in Kazakhstan, constructing an integrated gas chemical complex and the repurchase/acquisition of shares of the polypropylene plant, both in the Atyrau Region, were signed by Kazakh Energy Minister Kanat Bozumbayev and UAE Minister of Energy and Industry Suhail Bin Mohammad Faraj Al Mazroui.

Considering that Kazakhstan hosted EXPO 2017 and the upcoming World EXPO 2020 is in Dubai,Kazakh2020 pavilion commissioner Alen Chaizhunusov signed an agreement with his UAE counterparts on his country’s participation in the event.

Nazarbayev ended his visit by inviting the Crown Prince to Kazakhstan.