By Anuar Abdrakhmanov in Sports on 24 March 2018 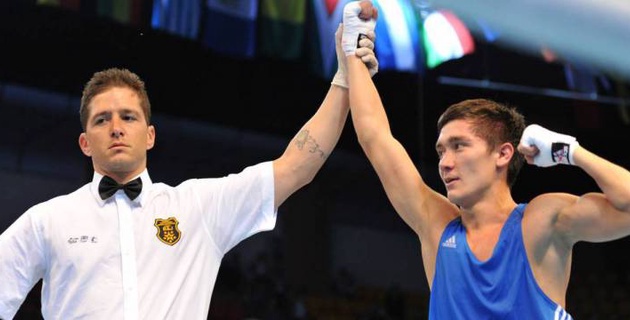 Ilyas Suleimenov won the gold medal in the up to 56 kg category, defeating Mohammad Alvadi of Jordan. Bekdaulet Ibragimov (64 kg) knocked out Damian Durkacz, the host country’s only representative in the finals, and Aslanbek Shymbergenov (69 kg) defeated Russian Sergey Sobylinsky. The last fight was quite spectacular with a bloody ending, with Shymbergenov breaking his opponent’s nose and then getting injured himself. The Kazakh boxer continued to dominate, however, attacking in all three rounds until the final bell.

Anton Pinchuk (91 kg), the last Kazakh boxer to fight, took the gold medal in the bout against Arslanbek Achilov of Turkmenistan.

“The fight was not easy. I had to work hard to win. We will keep working, as we have a lot of tasks and goals ahead to achieve. We will do our best to prove the high level of Kazakhstan’s boxing,” said Pinchuk after the tournament.

“This tournament is a good challenge for our guys. They will have a lot of important tournaments, such as the Asian Games and World Championship. We were convinced that we have a strong team and despite the fact that the team leaders did not take part in the tournament in Poland, the team showed good results,” said national team head coach Myrzagali Aitzhanov.

The team won seven medals altogether, including four gold, two silver and one bronze, the lastby Aiboldy Daurenuly in the over 91 kg category.

Kazakh boxers earlier had several wins, including five champions, at the tournament in Finland.

The highlight of the finals was the fight between Kazakh boxer Bek Nurmaganbet and Russian Artyom Ageyev, bronze medalist of the 2017 Russian championship. Nurmaganbet knocked out his opponent with a quick blow 40 seconds into the match to become the champ.

“We showed great results in Finland. Of course, there is always room for improvement. Kairat Yeraliyev had three fights in which he looked very convincing and showed his class once again. Abylaikhan Zhussupov also had three bouts with good boxers. Vasily Levit needed all three bouts in the tournament. Kamshibek Kunkabayev got very strong opponents in the super heavyweight category, a French boxer and an English one, but had very convincing wins over them. Our young boxer Bek Nurmaganbet had the first fight against a good Dutch athlete and knocked out the 2017 Russian championship prizewinner in the first round of the finals,” said Aitzhanov.