By Anuar Abdrakhmanov in Sports on 13 March 2018

ASTANA – Kazakh boxer and Olympic champion Daniyar Yeleussinov recently announced that he is turning professional and is expected to sign a contract with the British promoter Eddie Hearn. 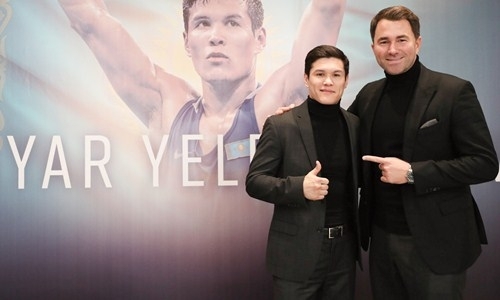 Yeleussinov won the Olympic champion title in the up to 69 kg weight category in Rio in 2016. After that, the 2013 world amateur champion and two-time winner of the Asian Games thought a lot about whether to stay amateur or turn professional.

“I like the vision of my career development with many fights. I should go on and show and prove myself in professional boxing. I’m going professional with confidence in myself, with the hope of becoming a many-time world champion. We agreed on my departure from the team with the head coach, the management was notified. My contract is signed for three years, and I plan to fight in the 66-kilogramme category,” said Yeleussinov.

Yeleussinov plans to have on average three or four fights a year. If it works out, then in two or three years, Daniyar will be able to claim the championship belt.

“I’m glad that we will work with Daniyar. We have the world heavyweight champion Anthony Joshua in our team, and we believe that Daniyar can do the same. He is a great and talented boxer, and our task is to make him known all over the world,” said Hearn.