ASTANA – Genetically modified living organisms might sound like fiction today, but in the not-too-distant future, genome modification will be used to edit DNA and treat human diseases like cancer and HIV, Kazakh biotechnologist Galymzhan Tleboldinov says. 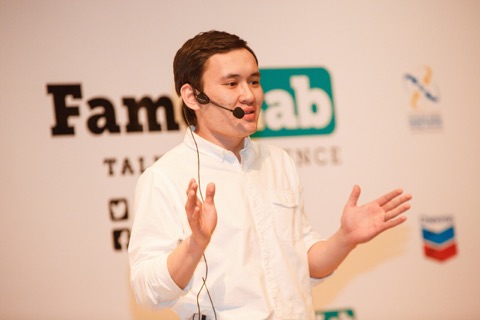 The new method for such gene editing, CRISPR, helped Tleboldinov win the national stage of Famelab 2018, a popular science communications competition held by the British Council.

“Indeed, the CRISPR/Cas9 system existed even before the first human appeared on Earth, as it is based on the ancient immune system of bacteria. In the 1980s, scientists found small pieces in DNA not belonging to living organisms under study. Later it became known that these pieces belonged to viruses – but the reason for their presence was still unknown. Only in 2012 did scientists conclude that these pieces were deliberately preserved by bacteria after the first attack of a particular virus. This was done in order for the bacteria to use that DNA piece to destroy the virus if it attacked again later. This system is now studied and improved for drug development, agriculture, and the treatment of genetic diseases, such as HIV and cancer,” he explained in an interview with The Astana Times.

The method was first proposed for gene editing in 2012 by Jennifer Doudna, a professor at University of California (UC) Berkeley. At that time, Tleboldinov was studying biotechnology at UC Davis, where he was a student from 2012 to 2016.

“Biotechnology was developing rapidly at that time and professors were up to date with new publications and always informed us about them. There, I was always in the know. CRISPR/Cas9 was a breakthrough, attracting a lot of interest. People, however, are still interested in it and since the topic was thoroughly researched in my university, I decided to tell about it at Famelab,” he said.

Tleboldinov’s video about the gene editing process took 11th place among 240 entries in the first stage of the competition. Fortunately for him, one participant decided to withdraw, allowing the young biotechnologist to join the national competition.

“During the competition, I learned that sometimes it does not matter how smart you are. I almost failed to make it to the national stage, because I was trying to show how much I knew. The point of Famelab is to deliver your speech in a clear way for your audience, and to attract interest. There is plenty of information on the internet; scientists must be able to communicate their knowledge to the public,” he added.

Tleboldinov was particularly impressed by the competition participants.

“I was surprised by the participants, as they are highly qualified and the overall level of preparation was great. Most of them are either in a research group investigating their topics or somehow related to the topic. Moreover, there was no sense of rivalry, as we helped each other prepare for presentation,” he added. Tleboldinov currently works at the National Centre for Science and Technology Evaluation.

“My work entails locating respected experts and contacting them to provide feedback for funding applications in biotechnology and agriculture. The nature of the work is closer to management, and in the future, I do not want to be just a researcher in a lab. I want to work on collaboration between researchers, as I feel that we have plenty of talented scientists but there is not proper management in research,” he added.

As a winner of the national stage, Tleboldinov was invited to represent Kazakhstan in the international round of Famelab in London.