BRUSSELS – Kazakh government officials and high representatives of European Union institutions discussed prospects for Kazakhstan-EU cooperation in light of the Enhanced Partnership and Cooperation Agreement (EPCA) signed in 2015 and the EU’s long-term foreign policy for Central Asia during a Feb. 26 roundtable at the offices of Euractiv, a Brussels-based online media resource covering the European Union. 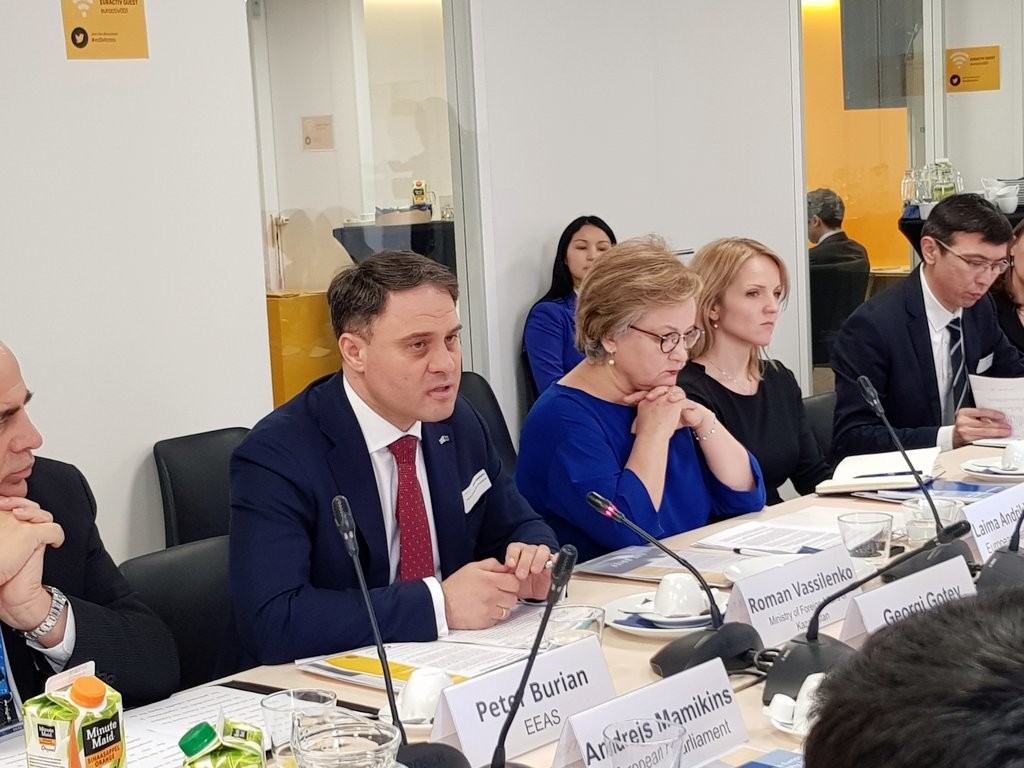 Experts tried to find answers to three main questions: What is the way forward for the EU’s cooperation with Kazakhstan? How will the EPCA help further develop economic relations and political cooperation? And finally, what impact will this partnership have on the EU’s long-term foreign policy in Central Asia?

“Relations between Kazakhstan and the European Union have never been at a higher level and there is only one way to develop – up and forward from where we are; the EPCA has laid a very strong foundation for this,” said Kazakh Deputy Foreign Minister Roman Vassilenko in his opening remarks.

He noted that Kazakhstan wants to diversify its trade with the EU and further develop cooperation in all areas. Vassilenko also mentioned that mobility and connectivity are quite essential in terms of further developing bilateral relations and said the “launch of the visa facilitation negotiations with the EU is one of our top priorities and we hope to start the talks before the end of this year.”

EU Special Representative for Central Asia Peter Burian, who also spoke at the roundtable, mentioned the recent conference dedicated to the 25th anniversary of Kazakh-EU relations held in Astana. Central Asia is changing positively, he said, and countries there are now addressing such challenges as security threats, violent extremism or the deterioration of the situation in Afghanistan. Therefore, the time could not be more auspicious for the EU to update its strategy for Central Asia. In this regard, Burian welcomed the initiative, originally presented in Samarkand in November 2017 by Uzbek President Shakat Mirziyoyev to convene the first summit of Central Asian leaders.

“We want to be real partners. The EPCA is a very good basis of our cooperation and sets an important benchmark for all the countries of Central Asia in moving our cooperation to a qualitatively new level,” he said, calling for intensified bilateral cooperation. Burian also reported that Kyrgyzstan recently expressed willingness to sign a similar cooperation agreement with the EU and talks are now ongoing.

Burian highlighted Kazakhstan’s growing maturity and influence as a regional player, notably through the initiatives launched during its non-permanent membership on the United Nations Security Council.

“Politically we share several objectives in common in favour of regional peace and stability, in fighting terrorism, developing and fostering the rule of law and obviously increasing prosperity. The EPCA brings us to a new level in all terms of relations,” said Luc Devigne, deputy managing director for Europe and Central Asia, during his speech.

Member of the European Parliament (MEP) and Vice-Chair of the European Parliament’s delegation to the EU-Kazakhstan, EU-Kyrgyzstan, EU-Tajikistan and EU-Uzbekistan Parliamentary Cooperation Committees and for relations with Turkmenistan and Mongolia (DCAS) Laima Andrikienė stated that the EU perceives Kazakhstan as a special and important partner in Central Asia and is keen on supporting the country to further improve its economy and social sector, among other things. She also noted that Kazakhstan is a “play ground” for big and important global players such as the EU, China, the U.S. and Russia, prompting a rather lengthy discussion later during the panel about the relevance of the so called Great Game in the 21st century.

MEP and Member of the European Parliament’s Committee on Foreign Affairs Andrejs Mamikins reported the EU is fully ready for the new level of cooperation, and that the EPCA creates a legal foundation for cooperation in 29 policy, economy, energy and transport areas. According to Mamikins, Kazakhstan is one of the pillars of stability in Eurasia and should definitely be viewed as a responsible regional player, an ambitious innovative power and an important partner for the EU.

“The ordinary Kazakh citizens should be the real winners of our cooperation,” he stressed.

Mamikins also noted that every second citizen of Kazakhstan is under 30 years old, making it essential to increase engagement with Kazakhstan today, because tomorrow it will bring benefits to all. Other Central Asian countries will become more engaged in with the EU, inspired by regional leader Kazakhstan, he predicted.