ASTANA – Fighting terrorism and extremism, including radicalisation, tackling drug and arms trafficking as well as environment and water management issues are among key security challenges faced by the European Union (EU) and Central Asia, according to experts who gathered Feb. 22-23 in Astana for the international conference marking the 25 anniversary of diplomatic ties between the EU and Central Asia. 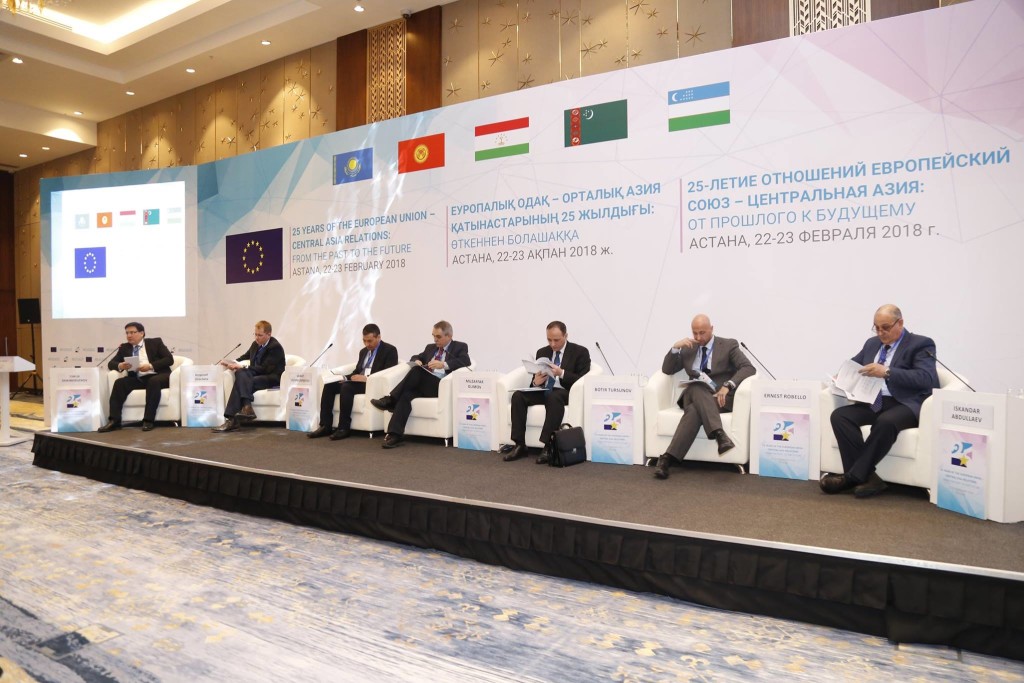 Director of Sharq Research Centre in Tajikistan Muzaffar Olimov pointed out the Central Asian region is at the intersection of global interests.

“The region is located close to a hotbed of instability and conflict bearing all negative processes happening in the neighbouring region and beyond,” said Olimov, referring to the worsening situation in Afghanistan and radicalisation processes as main security challenges.

The challenge for both the EU and the five Central Asian nations, Olimov noted, is in finding the balance between the human dimension and security and, in particular, between “fighting violent extremism and respect for human rights.”

“The problem is very evident in radicalisation of migrants. Over the past years, the assumption was formed that migrants are vulnerable to religious radicalisation. Research shows that more than 80 percent of the Central Asian migrants were recruited while working as labour migrants,” reported Olimov.

Radicalisation could be explained by social reasons, he said. These include inequality, poverty, discrimination, low level of education and of participation in the political decision-making process and crisis identity common for labour migrants.

“All of these factors relate to Central Asian migrants,” he added. “It remains unclear what factors motivate potential radicals to commit to violent extremism and terrorism and accept violence as a means to achieve political goals.”

There are, however, other factors contributing to radicalisation, said Olimov, including poor religious knowledge prompting people, especially young ones, seek knowledge outside as well as strong state control of religion that makes people hide their religious practices and affiliation.

Head of Department for Turkey, Caucasus and Central Asia at the Polish Centre for Eurasian Studies Krzysztof Strachota also brought the issue of terrorism up at the panel discussion. “The level of terrorism activity is low in the region, but at the same time several terrorist attacks across the world were found to be prepared by people coming from the Central Asian region,” he noted.

Similar to his colleagues, Deputy Director of Uzbek Institute of Strategic and Interregional Studies Botir Tursunov emphasised radicalisation as a salient issue.

“It has acquired a global dimension that penetrates almost all societies regardless of the level of socio-economic development, cultural religious affiliation of countries and regions,” said Tursunov, stressing the problem demands a constructive dialogue.

The definition of extremism and terrorism, he noted, is still unclear serving as a fundamental obstacle to finding the solution on a global level.

Tursunov noted the region managed to maintain peace and stability throughout the most difficult period in its history. Common willingness to maintain and promote stability and sustainable development has become a “more realistic goal than ever before,” he added, and the agreement to hold the Central Asia leaders’ meeting soon in Kazakhstan is a testament to that.

“Central Asia security is an integral part of global security,” he added, yet impossible to achieve and sustain without stabilising the situation in Afghanistan. Settling the long, protracted conflict in Afghanistan represents a “strategic opportunity” for the region to fully tap into economic cooperation and trade potential, according to Tursunov.

Lack of transport and communication infrastructure is another problem, according to the Uzbek researcher. “This hampers the full integration into the structure of economic relations increasing the vulnerability of nations to external threats and challenges,” he explained.

This corresponds to one of Kazakhstan’s suggestions for the new EU Strategy on Central Asia expected to be ready in 2019 voiced earlier the same day by Kazakh Foreign Minister Kairat Abdrakhmanov.

In his opening remarks at the conference, the minister highlighted the importance of transforming the region into a major transport and transit hub with a broader goal of achieving the region’s comprehensive integration in global processes.

Drug trafficking has long been on the security agenda of the region and beyond and the EU has assisted the countries with its Central Asia Drug Action Programme (CADAP) launched in 2001. “In this respect, the EU has a very strong interest in the promotion of security and stability in Central Asia and establishing reliable and mutually beneficial partnerships with the countries in the region,” said CADAP Regional Team Leader Ernest Robello.

“For instance, in Kazakhstan, we supported it in the development of its 2030 national strategy, drug programme in Kyrgyzstan adopted in 2014, national drug prevention programme in Tajikistan, the 2016-2020 national strategy in Turkmenistan and the programme of complex measures on countering drug abuse and illicit trafficking in Uzbekistan,” he noted.

The environment is also on the security agenda for the EU and Central Asia. Executive Director of Central Asia Regional Environment Centre Iskander Abdullaev pointed out environmental problems trigger problems in other areas and this requires bringing more stakeholders to address the acute problems, including the EU.

“Environment and water cooperation platform, which the EU chairs, is a very important platform where five countries come together,” he added.

“All these problems, water challenges, land degradation, biodiversity, degradation of environment in cities, air pollution, climate change look like a vicious circle if you look from the point of a single country, but as a region, there are a lot of opportunities,” he noted, stressing limited cooperation incurs significant costs. For instance, limited cooperation in water management cost $4 million annually and land degradation between 2001 and 2009 cost $5.85 billion.

The challenge, however, is growing demographic pressure in the region, which requires significant resources. Outdated infrastructure as well as outdated institutions and policies, he said, also impede the progress in the field and the governments should step up efforts in updating environmental laws and regulations.