By George D. Gleboff and Aigerim Seisembayeva in International on 27 February 2018

BRUSSELS – Kazakhstan has suggested developing a roadmap to implement the Enhanced Partnership and Cooperation Agreement (EPCA) between the nation and the European Union (EU) and its member states. Kazakh Foreign Minister Kairat Abdrakhmanov presented the idea in Brussels Feb. 26 during the 16th meeting of the Kazakhstan-EU Cooperation Council, the highest level dialogue platform between the two. 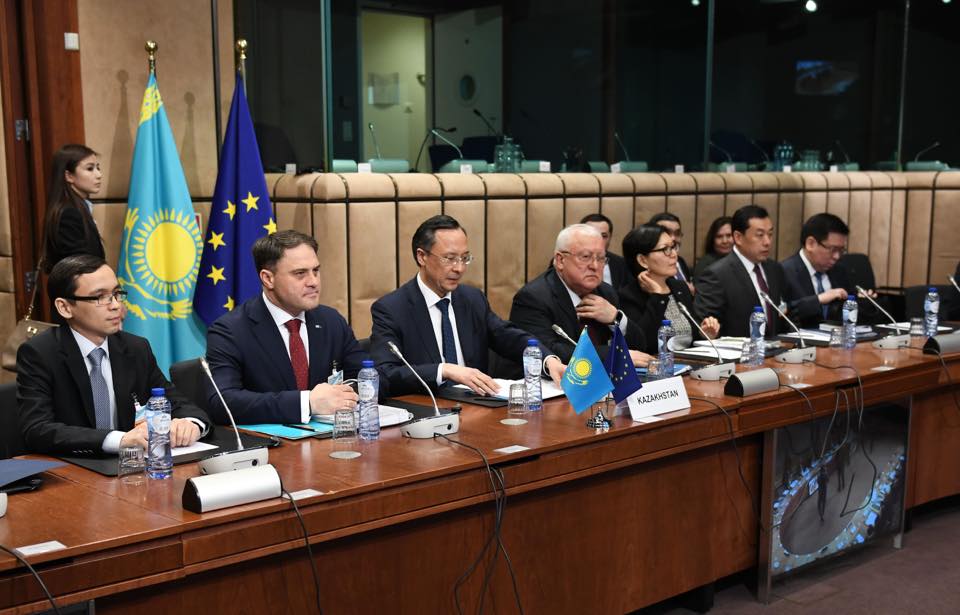 The proposed roadmap would seek to ensure the EPCA is effectively executed for both sides. The agreement, signed in 2015, has so far been ratified by 21 of 28 EU member states and was approved by the European Parliament in December. It has been in force provisionally since May 2016, after it had been ratified by Kazakhstan and approved by the European Commission, but requires the ratification by all member states and consent of the European Parliament in order to enter into force in full. EPCA, often called the second generation agreement will eventually cover 29 areas of cooperation.

“The extremely rapid pace of ratification of the EPCA clearly demonstrates the considerable interest of the EU member states in the dynamic development of cooperation with our country. This also shows that Kazakhstan and the EU share the desire to create a new and strong legal basis for deepening cooperation on the conditions of global competition and taking into account their economic and geopolitical interests,” said Abdrakhmanov.

The trade cooperation committee and customs and energy, transport, environment and climate change subcommittees are already operating under the EPCA and held meetings in March and July in 2017.

“The realisation of the EPCA’s potential meets Kazakhstan’s interests, since the document will contribute to the effective implementation of the comprehensive modernisation strategy pursued by President Nursultan Nazarbayev,” said Abdrakhmanov.

The EPCA’s consistent implementation will significantly increase the volume of trade, primarily through the sale of high-tech products, and generate new opportunities for economic growth and job creation, said Abdrakhmanov.

“Strengthening trade and economic ties is inextricably linked with the free movement of citizens. In this regard, starting negotiations on facilitating the visa regime as soon as possible has become an objective necessity,” he added at a joint press conference with Zakharieva, expressing hope that negotiations on the latter will begin this year.

In her turn, Zakharieva told the media the EU welcomes “cooperation with Kazakhstan in the implementation of EPCA’s priorities.” She added that the meeting of the Cooperation Council “also provided an opportunity to reinforce political dialogue.”

“In view of security context we discussed the importance of ensuring regional stability and security [in Central Asia] while also protecting individual rights and freedoms,” the Bulgarian minister noted also adding the EU appreciates Kazakhstan’s contribution to the development of a new EU Strategy for Central Asia “especially in the context where we see willingness of Central Asian countries to speak more and more with one voice.”

Abdrakhmanov held a number of additional meetings with top officials, including with EU High Representative for Foreign Affairs and Security Policy Federica Mogherini, where they discussed a wide range of international and regional issues, such as the situation in Syria as well as the implementation of the Joint Comprehensive Plan of Action regarding Iran’s nuclear programme.

The meeting with European Commissioner for International Cooperation and Development Neven Mimica was devoted to the on-going process of renewing the EU Strategy for Central Asia, which is set to be adopted by the middle of 2019.

According to the Kazakh Ministry of Foreign Affairs, Abdrakhmanov stressed Kazakhstan’s readiness to take an active part in developing the new document to ensure it is effective and takes into account the interests of all countries of the region. Cooperation in assisting Afghanistan, including in education, was also part of the discussion.

Abdrakhmanov and European Parliament delegation for Kazakhstan and other countries of Central Asia head Iveta Grigule discussed inter-parliamentary cooperation, including in the development of legislation.

The meeting with Belgian Deputy Prime Minister and Minister of Foreign Affairs and European Affairs Didier Reynders touched on prospects for developing bilateral trade and economic cooperation and attracting Belgian investment and technologies to Kazakhstan. In light of Belgium’s bid for non-permanent membership on the United Nations Security Council (UNSC) in 2019-2020, Abdrakhmanov briefed the delegation on Kazakhstan’s activities on the UNSC and President Nursultan Nazarbayev’s peace-making initiatives.

The Kazakhstan-EU Cooperation Council is the highest interaction body established under the EPCA. Kazakh foreign ministers and the member state holding the EU presidency meet annually to review the agreement’s execution and discuss bilateral and international issues.

The EU is Kazakhstan’s largest trade and investment partner, accounting for approximately half of the country’s foreign trade and direct investment. Kazakhstan-EU trade grew 25 percent in 2017 compared to previous year, reaching $30 billion.