ASTANA – Kazakhstan’s economy moved up one spot to 41st on the recently released 2018 Index of Economic Freedom annual report published by the Heritage Foundation. It was the highest ranking in Central Asia and among the Commonwealth of Independent States (CIS).

Out of 180 countries represented in the ranking, Hong Kong was recognised as the freest economy of the world, the same as 2017. The second place was taken by Singapore and the third went to New Zealand. The top 10 countries also include Switzerland, Australia, Ireland, Estonia, the United Kingdom, Canada and the United Arab Emirates. China placed 110th and the United States ranked 18th.

Kazakhstan’s economic freedom score is 69.1 out of 100 maximum.

“Its overall score has increased by 0.1 point, with significant improvements in investment freedom and government integrity offsetting steep declines in fiscal health and monetary freedom. Kazakhstan is ranked 11th among 43 countries in the Asia-Pacific region, and its overall score is above the regional and world averages,” reads the report.

Kazakhstan belongs to a group of “moderately free.” The nearest countries in the list are Jamaica on the 40th place and Colombia on the 42nd.

While Kazakhstan’s position on the index is respectable, some things were criticised by the foundation.

“Kazakhstan’s government is well aware that the economy is overly reliant on oil and extractive industries, but initial attempts to open such sectors as transport, pharmaceuticals, telecommunications, petrochemicals, and food processing to greater development and investment have been uneven. Notwithstanding some positive changes, investors remain concerned about corruption, bureaucracy, and arbitrary law enforcement, especially at the regional and municipal levels. An additional concern is the banking sector, which suffers from low liquidity, poor asset quality and a lack of transparency,” said the report. 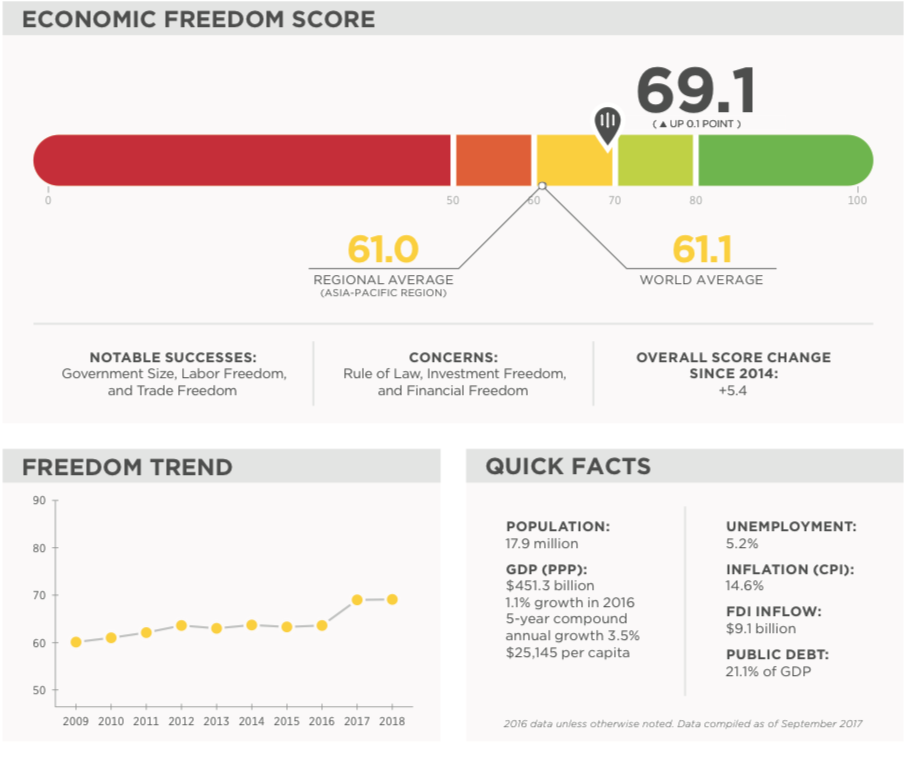 Rule of law is assessed by the categories of property rights, where Kazakhstan has 56 points out of 100, government integrity (44.6) and judicial effectiveness (58.1). That area is the weakest for Kazakhstan among four assessed.

“Secured interests in property are recognised in law. Although the government has improved the enforcement of contracts and has simplified property registration, property rights are not fully protected. Judges are subject to political bias. Corruption is not only evident in the judicial system, but also widespread throughout the government. Those who are in positions of authority are able to act with impunity,” reads the report.

Government size is measured by categories of government spending (85.3 points), tax burden (92.6) and fiscal health (87.3). The flat personal income tax rate is 10 percent, and the standard corporate tax rate is 20 percent. The overall tax burden equals 15.6 percent of total domestic income. According to foundation’s data, over the past three years, government spending has amounted to 22.2 percent of total output (GDP), and budget deficits have averaged 2.7 percent of GDP. Public debt is equivalent to 21.1 percent of GDP.

Regulatory efficiency consists of business freedom at 74.3, labour freedom at 86.8 and monetary freedom at 68.2. Here the researchers noted the simplified the process for starting a business, as well as improved processes, such as dealing with construction permits, getting electricity, minority investor protections, exporting, enforcement of contracts and resolution of insolvency.

In the open markets area, trade freedom is assessed at the level of 75.6 points, while investment and financial freedom were fixed half way on the level of 50 points.

“Trade is significant for Kazakhstan’s economy; the combined value of exports and imports equals 62 percent of GDP. The average applied tariff rate is 4.7 percent. Nontariff barriers impede trade. Government openness to foreign investment is below average. Troubled banks have been recapitalised, and the financial sector is largely stabilised, but the number of nonperforming loans remains high, concentrated mostly in three banks,” according to report.

“High points were reached in categories of fiscal health, business freedom and labour freedom. One of the factors that contributed to the promotion in the rating is the improvement and expansion of the conditions for the implementation of entrepreneurial initiatives. So, for example, in 2017 a simplified procedure for the registration of individuals as an individual entrepreneur came into effect. Also, work to improve the tax administration system with an emphasis on voluntary fulfilment of obligations by taxpayers continued. The number of tax inspections has decreased 40 percent,” Kazakhstan Institute for Strategic Studies Research Fellow Anna Alshanskaya told The Astana Times.

She has added that the new tax code might also improve the situation.

“An important priority of the new tax code, which came into force from the beginning of the year, is to protect the interests of entrepreneurs. The introduction of three-vector administration, in which incentive and control measures are based on a differentiated approach to the taxpayer, optimisation of tax regimes and tax burden will help create even more favourable conditions for the development of mutually beneficial cooperation between the state and business,” she said.