By Frol Leandoer in Nation on 1 February 2018

ASTANA – Drivers in Kazakhstan can now reserve and purchase uniquely numbered license plates through the Government for Citizens Corporation front offices. This service was launched by the state corporation jointly with the Ministry of Internal Affairs on Jan. 15, the press service of the company reported. 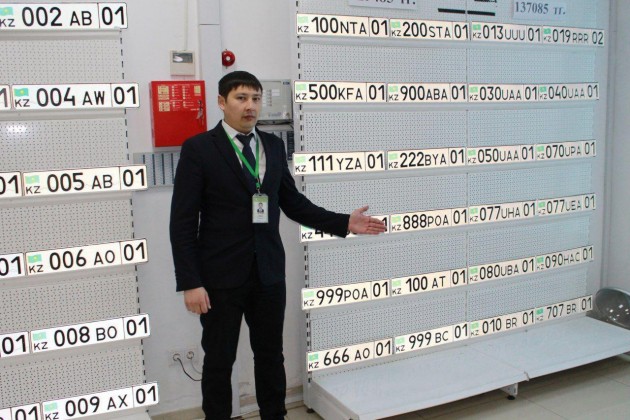 “You can buy ‘beautiful’ license numbers, not only with symmetrical digital signs, but also with alphabetic combinations. To do this, you need to go to the Specialised Centre for Servicing the Population (commonly known as TsON), lodge an application and pay a state duty,” the state corporation said.

The Government for Citizens reminded that, since 2014, car owners have been able to buy so-called “mirrored” digital numbers.

“Now the functionality is designed so that anyone can choose for themselves the preferred combination of numbers or letters and become a happy owner of the desired license plates on a fee basis. For example, license plates of the series 010, 020, 030, 077, 707 and similar will cost the applicant 137,085 tenge (US$426), and the same numbers, along with symmetrical letters, 274,170 tenge (US$852),” the state corporation specified.

“I would like to start off from when I was a young teenager, I took part in street racing. These kinds of license plate numbers were not popular in the community, since it would be easy to remember the number. And now my vision on these numbers is still negative. I think spending a big amount of money on just a number is not very wise. I would rather invest the money into my family. However, I encourage the new way that the process is being done through the state organisation, that the money goes to the country instead of somebody’s pocket. We live in a free country where anyone can spend their money the way they want, so if someone is willing to buy an expensive number then why not,” said car owner Yerbol Tusaubek.

“I’ve always wanted for us to have the same opportunity as in the West, to get the number you want. I’m planning to get 777 on my license plate. I believe it will bring me good luck,” Yevgeni Orlov, another driver, said.