By Aigerim Seisembayeva in International on 6 February 2018

ASTANA – The Eurasian Economic Union’s (EAEU) digital agenda and mechanisms for implementing policies were the main topics of the Feb. 2 meeting of the Eurasian Intergovernmental Council (EIC) in Almaty, Kazakhstan’s largest city. The meeting resulted in the adoption of 14 documents, including an agreement on labeling goods and a treaty on pensions.

The Kazakh, Armenian, Belarusian, Kyrgyz and Russian prime ministers, as well as Chairman of the Board of the Eurasian Economic Commission (EEC) Tigran Sargsyan participated in the meeting. Heads of government, as well as official delegations from Azerbaijan and Tajikistan, also took part in a forum themed “Digital agenda in the globalisation” that was initiated by Kazakh President Nursultan Nazarbayev and took place the same day.

Speaking at the opening of the meeting, Kazakh Prime Minister Bakytzhan Sagintayev outlined a number of practical results of the EAEU’s continued development. He stated, in particular, that the union’s contractual and legal foundation has been created and is constantly being improved.

“The work on shaping the EAEU is in progress. Three years of work are bringing some positive results. We adopted a number of important documents on the union’s current and further development. The proof is the entry into force of the new EAEU Customs Code on Jan. 1. This created the necessary conditions for a quicker procedure of passing through customs,” said Sagintayev.

Despite global economic instability, Kazakhstan managed to maintain positive trends in trade turnover both within the EAEU (31 percent growth in 2017 compared to 2016) and with third countries. In 2017, the Kazakh economy, according to preliminary data, grew 4 percent.

The meeting’s focus was on issues related to digitisation in all sectors of the economy, including goods, services, labour and capital markets. The EAEU member states’ governments, together with the EEC, have launched the practical implementation of the digital agenda until 2025, which was approved by EAEU heads of state in December 2016.

“Due to economy digitisation, we are about to face a number of issues in employing the released labour. Our citizens should be able to quickly find new jobs, including on the territory of the union,” Sagintayev said.

In this regard, he noted the presidents of Kazakhstan and Russia have discussed creating a single integrated Eurasian electronic labour market and developing unified qualification requirements for employees.

Sagintayev also pointed out a number of issues in customs regulation.

“We have a single customs territory, but no integration in customs declarations for export and temporary import of railway transport. In this regard, I consider it necessary to carry out joint work on amending the decisions of the commission [EEC], as well as the international transport legislation,” Sagintayev stated.

He noted the importance of intensifying work on integrating information systems and providing electronic customs marks on transport documents. It is notable that Kazakhstan is currently implementing the Astana-1 information system, which enables customs transit and export declaration. 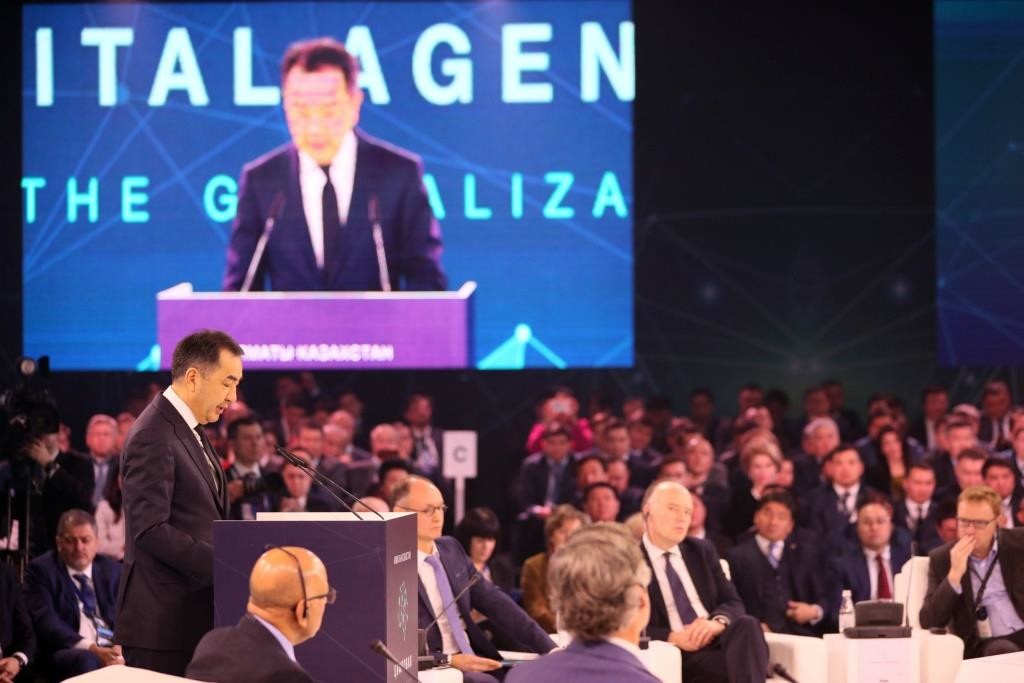 Karen Karapetyan, the Prime Minister of Armenia, highlighted the need to concentrate on areas that will ensure sustainable economic development.

“It is important to keep the focus on eliminating the barriers that still exist on the common market, to provide the necessary prerequisites for doing business in the conditions of unified healthy competition rules and efficient use of logistics, transport and communication capabilities,” said Karapetyan. Belarusian Prime Minister Andrei Kobyakov stressed “the need for additional internal coordination of the EAEU, as well as ensuring the comprehensive and unconditional fulfilment of the union’s norms and commitments undertaken by all member states.” Kobyakov also noted the need to take into account national interests and find an optimal balance between these interests when making decisions on the introduction of labelling specific goods.

Kyrgyz Prime Minister Sapar Isakov emphasised the potential of the union and the possibilities of its economic growth. In his opinion, it is important to stimulate cooperation in industry, to promote the creation of joint ventures, to develop a healthy competitive environment and to improve the business climate.

Russian Prime Minister Dmitry Medvedev focused on continuing work on eliminating barriers and constraints that remain in the EAEU market and proposed complementing the work with new initiatives.

“We need our own digital platforms and infrastructure; we must act jointly using common standards. I am talking about traceability, e-commerce development, the transition to common standards and IT technologies in transport, industry and customs. We need to consolidate our national proposals,” he said.

The EIC meeting adopted 14 documents, including the Agreement on the Labeling of Goods by Identification Means in the Eurasian Economic Union, which was developed on the instruction of the prime ministers and aims at increasing control over the circulation of goods within the EAEU.

A regulation on the development, financing and implementation of interstate programmes and projects in the industrial sphere was among the adopted documents.

The meeting participants appointed a representative of the Kyrgyz Republic as a member of the EEC Council. The EIC’s next meeting is to be held in Minsk.