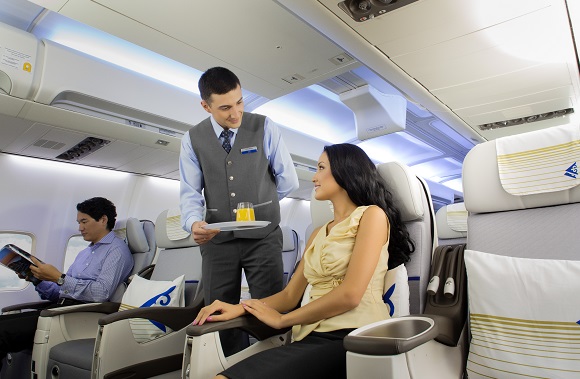 “Astana EXPO 2017 and increased transit traffic through the new terminal at Nursultan Nazarbayev airport in Astana became the main drivers of growth,” said Air Astana President and CEO Peter Foster. “The exhibition was a great success and significantly exceeded expectations on the number of visitors. Transit flow increased by 58 percent and now makes up 12 percent of the total passenger traffic.”

“Our comparatively low unit costs allowed us to successfully develop this segment, being competitive in key foreign markets such as Russia, China, India and the EU, as well as in smaller fast-growing markets such as Ukraine, Georgia and Uzbekistan. Although further growth is expected in 2018, now in most regions the industry operates at peak or near peak capacity, while fuel, personnel, airport and other consumer charges are under pressure. Controlling costs while maintaining quality standards will be the main challenge in the coming period,” he said.

The airline has received a new airliner A321neo, the second of the A320neo family to join the company’s fleet. It also confirmed an order for five regional E2 new-generation aircraft. The first regional aircraft will be delivered in October. The company is set to receive a total of 23 new aircraft: 15 A320neos, five E2s and three Boeing 787s.

Air Astana currently operates more than 60 international and domestic flights out of the Almaty and Astana international airports. The company’s fleet consists of more than 30 aircraft, including Boeing 767-300ERs, Boeing 757-200s and Airbus A320s, A320neos and Embraer E190s.

The airline became the first carrier among the Commonwealth of Independent States (CIS) and Eastern Europe to be awarded a prestigious four-star rating by the international agency Skytrax in 2012, as well as the title of Best Airline in Central Asia and India. Air Astana repeated both awards for the next six years.

The company, now a joint venture between Samruk Kazyna Sovereign Wealth Fund and BAE Systems Plc, will be partially privatised this year.