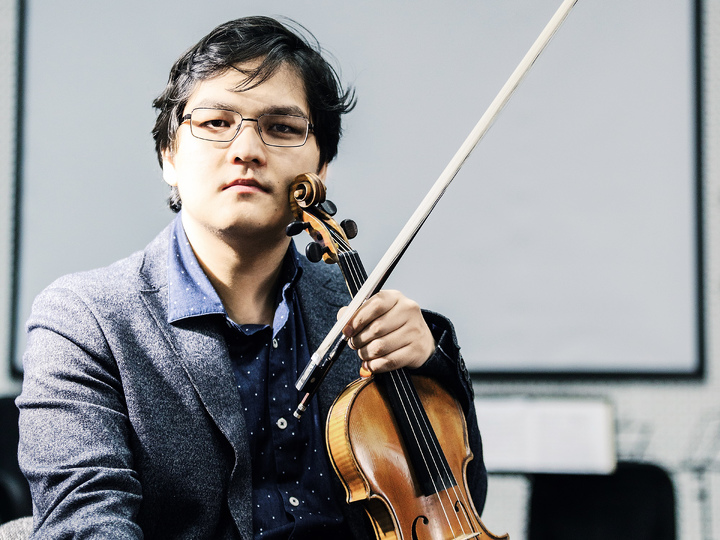 “Two distinct types of experience do not interfere; on the contrary, they perfectly complement each other. As an art director, I can communicate with the audience we perform music in front of,” noted Sherniyaz Mussakhan.

Mussakhan, raised in a family of a composer and a ballerina, has been playing the violin since age five. He started his music education in a state school in Almaty.  When the violinist was 10 years old, his talent was noticed by eminent Russian musician Vladimir Spivakov who invited Mussakhan to study at Central Music School of Moscow State Tchaikovsky Conservatory. Having finished studies in Russia, Mussakhan went on to receive higher education in the Florentine High School of Music, Italy, and University of Lausanne, Switzerland.

The violinist has performed solo in famous halls of Russia, Poland and Austria, such as Mariinsky Theatre in Saint Petersburg and Mozarteum Concert Hall in Salzburg. He also was the first from Central Asia to become a laureate of the prestigious competition of young violinists named after Karol Lipinsky and Henrik Wieniawski in Poland.

In 2015, Mussakhan established Young Eurasian Soloists chamber orchestra, which consists of musicians aged 18 to 30 from different countries of Europe and Asia, and became its art director. There are 25 members in total; however, since each musician also performs solo, usually 15-18 performers play together.

“An orchestra, especially a chamber one, can be likened to a family, where each member plays a special role. Musicians come from different backgrounds; therefore, it is important to find an interpretation that suits everyone and perform as a single body. This requires patience, diplomacy and flexibility. Playing in the orchestra also provides more opportunities to select compositions,” said Mussakhan.

“I’m interested in space exploration, new discoveries in quantum physics, and it seems to me that when we play the music written by such great composers as Bach and Beethoven, we are much closer to answering questions than science,” added Mussakhan.