By Elya Altynsarina in International on 17 January 2018

ASTANA – Assistant Secretary-General for Political Affairs of the United Nations Miroslav Jenca held a webinar with Kazakh journalists in Astana Jan. 11 to discuss the role of Kazakhstan as a non-permanent member and president of the UN Security Council. 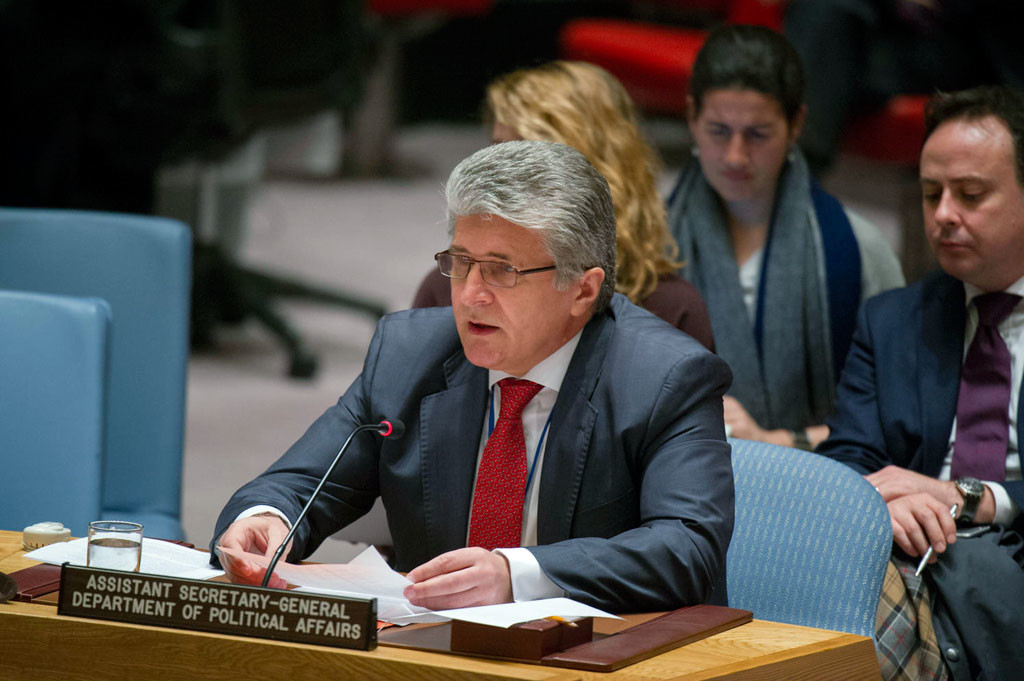 Jenca said the presidency has a prominent role for the functioning of the council, as the president calls its meetings, approves the provisional agenda, and represents it in its capacity as an organ of the United Nations. According to the provisional agenda, there will be several important meetings, including on issues of nuclear non-proliferation and confidence-building measures with the participation of the President of Kazakhstan, Nursultan Nazarbayev, and a discussion concerning Central Asia and Afghanistan.

Alongside being the first non-permanent member of the council from Central Asia, Kazakhstan is contributing to the peaceful resolution of the situation in Syria. Jenca believes that today the country is using its track record of a peacemaker that has been built over many years on initiatives of peace and stability in Central Asia and nuclear disarmament, to mediate in critical issues.

“It is now clear that the situation in Afghanistan cannot be solved by military means only – we have to focus on building the regional cooperation and infrastructure projects”, the speaker said.

He recalled his experience of giving lectures at Almaty universities to students from Afghanistan during his term at the United Nations Regional Centre for Preventive Diplomacy for Central Asia (UNRCCA) and pointed to the Kazakh practice of giving scholarships to Afghan youth as a concrete example of supporting the development of Afghanistan.

The procedures of the council provide that the Secretary-General, all states and organs of the United Nations communicate to bring the item to the UNSC agenda. Considering the complexity of items on the agenda, as well as Kazakhstan’s ambitious initiatives, the presidency presents a leadership challenge for its holder, Jenca said. But sharing his insight from participating in the council’s work, he commended the skilfulness of Kazakh diplomats in performing their duties.

“Members of both the council and the General Assembly highly appreciate the work of Kazakhstan,” the diplomat said.

Talking of the work procedures of the council, its monthly programme is prepared well in advance. It includes topics scheduled beforehand according to the council resolutions, such as the situation in the Middle East, as well as the issues put on the table as things develop. An example can be the developments and the recent talks between the two Koreas which prompted a meeting of the Security Council.

The council’s agenda reflects the situation in the world, Jenca said. It is no coincidence that the issue of nuclear disarmament, an important topic, has been brought up for discussion by a country which, among the few, voluntarily renounced its nuclear weapons and closed the test site, he noted.

Today, we see the nuclear tensions growing, making the risk of proliferation much higher. The UN official explained. The decision of President Nazarbayev to personally attend the UNSC meeting dedicated to non-proliferation of weapons of mass destruction demonstrates the country’s commitment to the issue, Jenca said.

Comparing to quite a traditional issue of nuclear non-proliferation, the upcoming discussions on Central Asia and Afghanistan is a relatively new topic for the Security Council. Although the council has been previously working on Afghanistan, Kazakhstan’s emphasis on tying the situation in Afghanistan to Central Asia opens up a new sight to the issue. Jenca expects that this discussion will focus on security and conflict prevention in the greater region.

“Kazakhstan is active in other fields of the UN work, including the achievement of Sustainable Development Goals (SDGs), and assisting the UN through measures of preventive diplomacy,” he said. The country has also contributed to creating the UNRCCA Office in Ashgabat, Turkmenistan in 2007, thereby underlining the preventive diplomacy as its foreign policy tool and priority.

In this regard, the views of Secretary General Antonio Guterres to measures of conflict prevention align with those of Kazakhstan. It might be another reason for positive expectations from Kazakhstan’s UNSC membership and presidency.

UN Security Council high-level debate on “Non-proliferation of weapons of mass destruction: confidence-building measures” is scheduled on Jan. 19 with the participation of President Nazarbayev and UN Secretary-General Guterres. Other heads of state and top officials of the UNSC member states are expected to attend, too. According to Jenca, UN is interested in observing the confidence-building practices particularly in Asia as Kazakhstan already has experience advancing the Conference on Interaction and Confidence Building Measures in Asia (CICA).

Miroslav Jenca of Slovakia assumed the position of Assistant Secretary-General for Political Affairs on May 1, 2015, and is responsible, among other things, for overseeing the divisions in the Department of Political Affairs dealing with the Americas, Asia and the Pacific, Europe and the Middle East and West Asia, as well as the Decolonisation Unit and the Division for Palestinian Rights. He has served as the Special Representative of the Secretary-General and Head of the United Nations Regional Centre for Preventive Diplomacy for Central Asia (UNRCCA) in Ashgabat, Turkmenistan, since 2008.