WASHINGTON – Kazakh President Nursultan Nazarbayev met Jan. 16 with U.S. President Donald J. Trump at the White House during Nazarbayev’s two-day official visit to the United States, the first such visit at the invitation of the country’s leader since 2006. 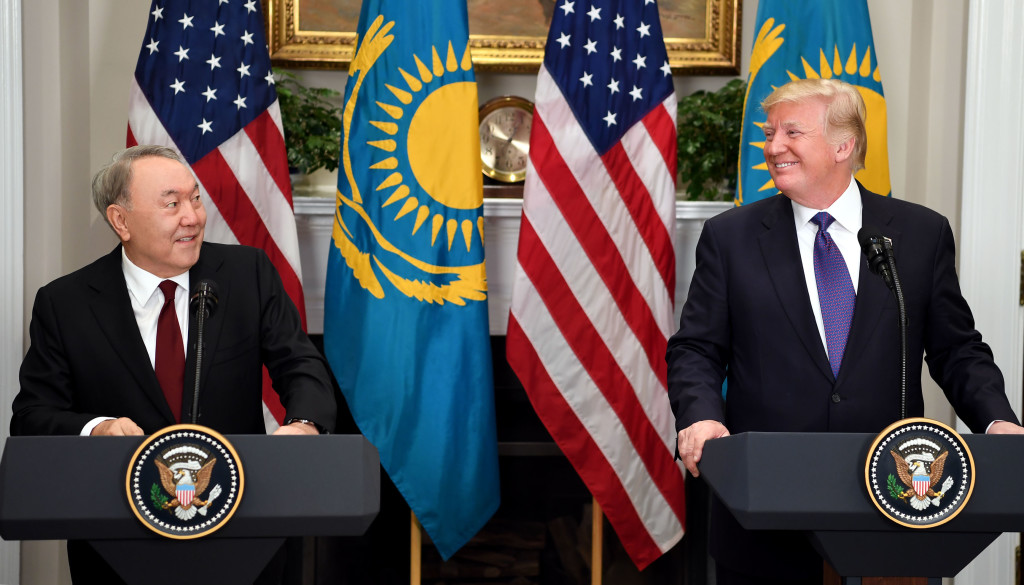 After the pomp, ceremony and protocol at noon, the two leaders met in a closed-door session followed by an extended meeting with cabinet members from both countries present. They also held a joint press conference and a working luncheon.

The leaders agreed to elevate bilateral cooperation to the level of enhanced strategic partnership, which, in Nazarbayev’s words, “would signal the new era of the relations between Kazakhstan and the United States.”

In his press remarks before the bilateral meeting, Trump greeted Nazarbayev as “the highly respected” leader, adding that Kazakhstan is America’s “valued friend and a strategic partner in Central Asia” and the two countries have “a tremendous relationship in terms of economics.”

Trump also reminded the press of the meeting he had had with Nazarbayev in Saudi Arabia on the sidelines of the Arab-Islamic-American Summit back in May 2017 and said the two had “developed an immediate relationship.”

In a joint statement titled “Kazakhstan and the United States: An Enhanced Strategic Partnership for the 21st Century,” Nazarbayev and Trump reaffirmed Kazakhstan’s independence, territorial integrity and sovereignty, as well as the Central Asian nation’s role in advancing global peace and prosperity.

“President Trump noted Kazakhstan’s global leadership as an elected member of the United Nations Security Council in 2017-2018,” the statement read, and “praised its legacy as a leader in international non-proliferation efforts, beginning with the voluntary renunciation of its nuclear arsenal in 1992, and reinforced by on-going commitments to nuclear security and recent support for preventing the spread and use of chemical weapons.”

The statement, which covered issues from Astana’s leadership role globally and regionally, to defence and security cooperation, including in Afghanistan and in the fight against terrorism and extremism, to economic partnership and the human dimension, attached a renewed importance to the role of the regional Central Asia plus the U.S. dialogue format, known as C5+1, in addressing shared challenges in the region.

Given the positive developments towards greater integration in Central Asia over the past year, it came as no surprise that Nazarbayev said he arrived in Washington, “representing Central Asia, in the format of the five Central Asian countries.”

During the negotiations, Nazarbayev and Trump touched upon a wide range of bilateral and multilateral issues, including strengthening cooperation on political and security issues, trade and investments and people-to-people relationships through regular high-level meetings within the framework of an Enhanced Strategic Partnership Dialogue. 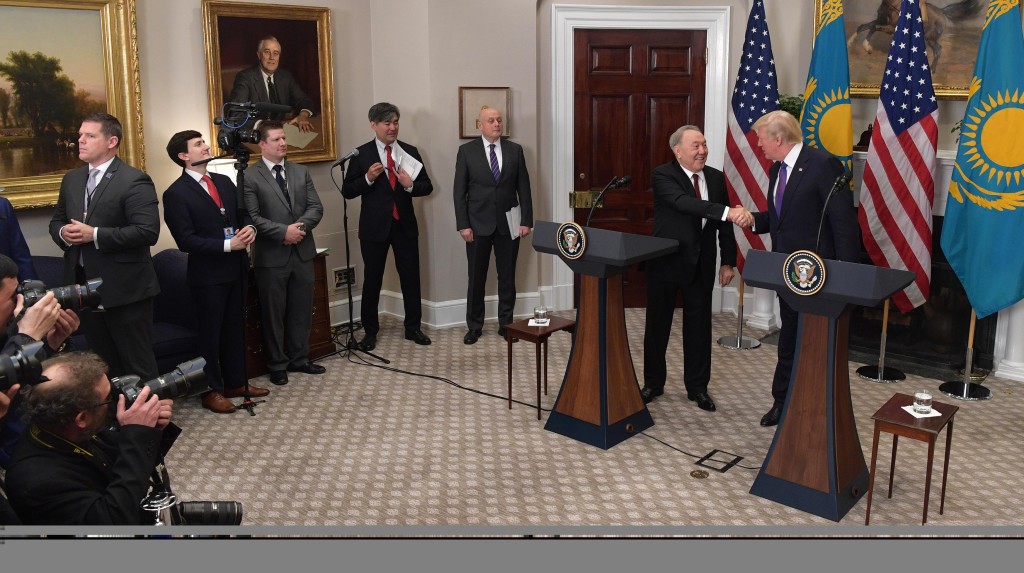 High on the agenda was the issue of non-proliferation of weapons of mass destruction, including North Korea’s nuclear and missile programmes, which the two leaders condemned.

“Kazakhstan has a moral right to talk to the nations that are seeking nuclear weapons,” said Nazarbayev. “This is why we’re talking to Iran, and this is the way we will be talking to North Korea.”

He also said, “the issue of North Korea could be solved by joining the efforts of the U.S., China and Russia. And Kazakhstan, being a neighbour of Russia physically, of course, is following very closely the dynamics the U.S. and Russian relations, which suddenly plunged into the abyss.”

On Afghanistan and regional security, the U.S. President thanked Nazarbayev for supporting the United States’ South Asia strategy by guaranteeing continuous logistical support and access to Afghanistan and contributing to humanitarian efforts.

He also praised Kazakhstan’s support “for fair burden sharing” through past and future financial contributions to the Afghan security forces, as well as the offer to extend an Afghan specialist programme in cooperation with the U.S. to train Afghan civilian and security personnel at Kazakh universities.

With regard to Syria, Nazarbayev briefed Trump on Kazakhstan’s efforts to bring about peace in Syria through hosting a series of negotiations in the nation’s capital, known as the Astana Process. The two leaders welcomed “diplomatic initiatives that achieve any genuine de-escalation of violence and strengthen the basis for a political settlement of conflict,” the joint statement read. To date, there have been seven rounds of Syrian peace talks in Astana in 2017.

The visit coincided with Kazakhstan’s January presidency in the UN Security Council and, according to Trump, bilateral “cooperation has grown even stronger this month” during the Central Asian nation’s tenure in the UN body.

Nazarbayev’s visit to the United States, the seventh in the history of bilateral relations, has sent an important political signal for expanding the countries’ bilateral business ties, deepening trade, economic, investment and innovation-technological partnership.

The U.S. is one of Kazakhstan’s most important economic partners, with investments in Kazakhstan, according to the official report from Akorda, totalling around $50 billion and making the U.S. one of the largest investors into the Kazakh economy. Currently, more than 500 American companies have operations in Kazakhstan.

In the 10 months of 2017, two-way trade between Kazakhstan and the U.S. totalled $1.38 billion. Kazakhstan’s goods imports from the U.S., including aircraft, machinery, poultry meat and beef, electrical machinery, iron and steel products, prepared food, planting seeds, wine and beer, and snack foods, were $1.04 billion. Kazakhstan’s total exports of products to the U.S., which mostly consist of mineral fuels, ores, slag, uranium, thorium, iron and steel, inorganic chemicals and other base metals, totalled $339 million.

The Nazarbayev-Trump meeting was followed by a business forum with American executives at the U.S. Chamber of Commerce, which resulted in the conclusion of around 20 agreements worth $7.5 billion. 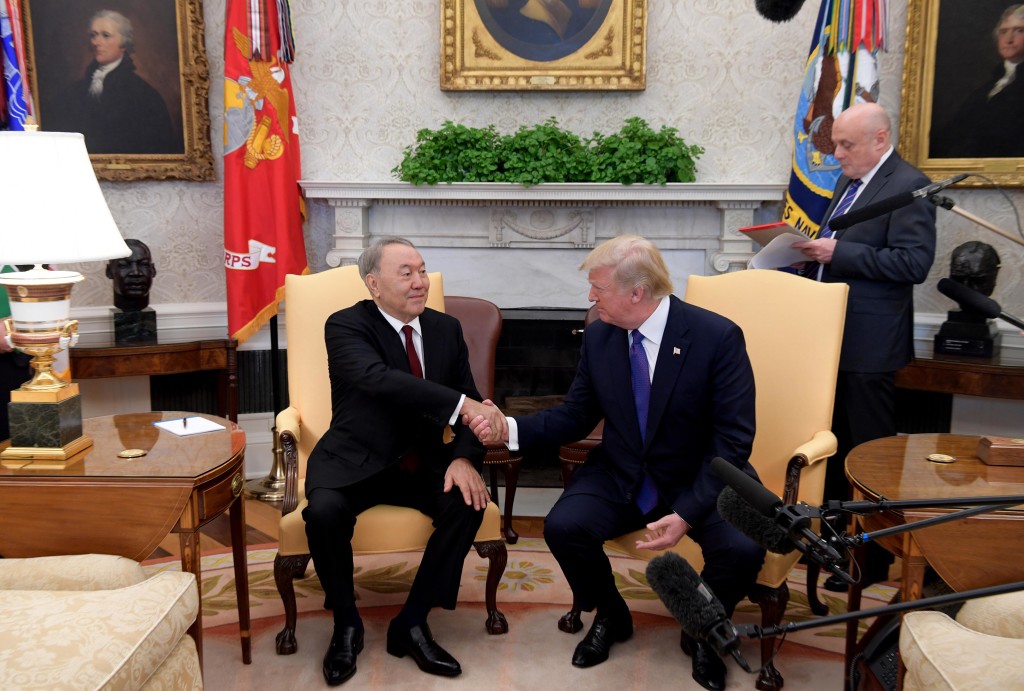 Nazarbayev noted Kazakhstan and the U.S had reciprocally introduced 10-year business and tourism visas back in December 2016, a decision that marked the 25th anniversary of diplomatic relations between the two countries.

He also said work is underway to open direct flights between Kazakhstan and the United States.

The two presidents pledged to promote a fair and reciprocal economic partnership that increases bilateral trade and investment and creates jobs and opportunities in both countries.

“He’s on his way – very rapidly,” said Trump of Nazarbayev in reference to the strategy announced by the Kazakh leader back in 2012 to become a top 30 global economy by 2050.

Another major topic of discussions for Nazarbayev was the sanctions issue, which the leaders agreed to consult on to avoid any unintended consequences for Kazakhstan’s economy.

On Jan. 17, Nazarbayev was to visit the Library of Congress, which came as a testament to the strong cultural ties, evidenced by bilateral partnerships, agreements and exchanges.

Nazarbayev’s visit to the U.S. will continue in New York Jan. 18 where he will chair the UNSC Members’ High-Level Thematic Debate on “Non-proliferation of weapons of mass destruction: confidence-building measures” at the UN headquarters.