By Elya Altynsarina in International on 24 January 2018

ASTANA – Working to fulfil the program of its presidency of the United Nations Security Council, Kazakhstan held Jan. 19 a ministerial debate on Central Asia and Afghanistan entitled “Building Regional Partnerships in Afghanistan and Central Asia as a Model for the Security-Development Nexus.” 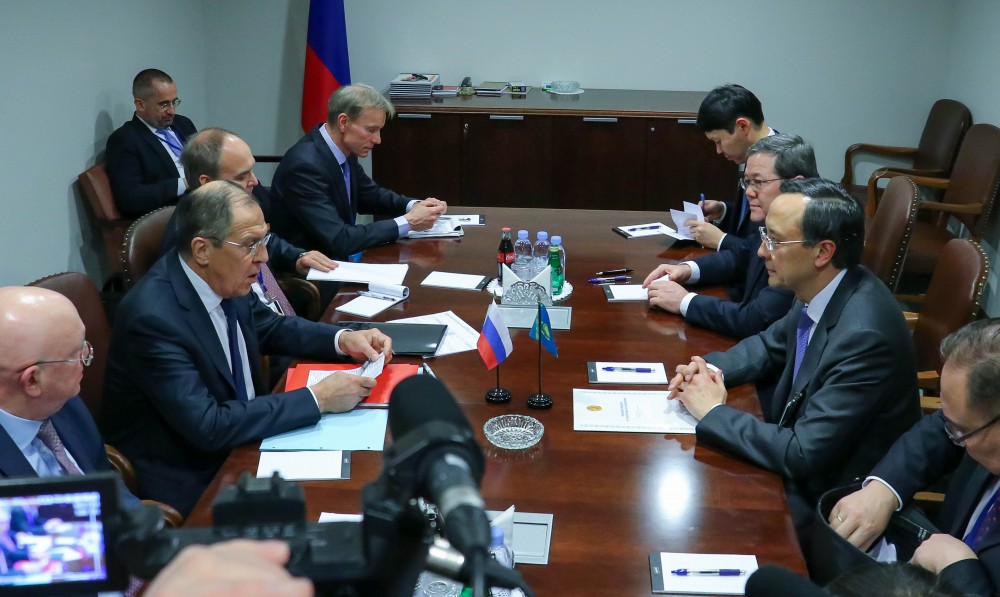 As has been reaffirmed by the Kazakh leadership on many occasions, Kazakhstan wants to contribute to long-term peace, security, development and prosperity in Central Asia, and has promoted using political and economic tools to improve the fragile security and statehood situation in Afghanistan as a starting point. The foreign ministers of Central Asian countries and Russia, key stakeholders in the issue, as well as a deputy foreign minister of Afghanistan, also attended the meeting.

Opening the meeting, Kazakh Foreign Minister Kairat Abdrakhmanov restated the position laid out by Kazakh President Nursultan Nazarbayev the day before at the Security Council: that the transformation of Central Asia and Afghanistan into a model zone of peace, cooperation and security is one of Kazakhstan’s seven priorities during the two years at the UNSC.

In this regard, he called on others to explore the development potential in Afghanistan instead of seeing it as a threat. This potential can be rooted in Afghan-Central Asia border zones, which will be further developed into regional infrastructure, trade, investment and transit projects, said the minister.

He listed three aspects that, in his view, will ensure success in Afghanistan: that security and development must always be considered interrelated; that issues in Afghanistan are not country specific and more of a regional nature and will require solutions that extend outside the country itself; and that UN structures need to coordinate and integrate their development strategies in order to make full use of limited resources. The last point is also relevant in tackling the current critique of the funding and efficiency of UN offices.

In his statement, UN Secretary-General Antonio Guterres said that sustainable development is not only a fundamental end but an important factor in preventing and solving conflict, as well as sustaining peace. He noted the significant progress in Central Asia, including declined poverty rate in Tajikistan from 81 percent in 2003 to 31 percent in 2015, intensified cooperation on water resources through bilateral water commissions and agreements, and other steps.

“These developments hold important lessons for Afghanistan, where water-dependent farming and agriculture make up nearly half of the economy,” said Guterres. “Only by addressing the root causes of crisis, including inequality, exclusion and discrimination, will we build peaceful societies resilient to terrorism and violent extremism.”

But Guterres also underlined that Central Asia’s landlocked countries, having been economically linked in the past, “can never achieve their full potential alone,” and encouraged governments to build on the enormous potential for mutually beneficial joint projects, trade and exchange that arise from the common geography and history of Central Asian countries and Afghanistan, and their strong cultural ties.

He also mentioned some of the many challenges in Central Asia, including those to water security, such as the unprecedented melting of mountain glaciers in Tajikistan and the problem of the Aral Sea; as well as energy and trade issues, to name a few. Guterres offered assistance from the UN Regional Centre for Preventive Diplomacy for Central Asia in Ashgabat to modernise the regional legal framework on managing trans-boundary water resources, and noted that the centre is including Afghanistan in its efforts to build capacity in water diplomacy.

Unlike Guterres, who highlighted sustainable development tools to solve regional problems, Russian Foreign Minister Sergei Lavrov mainly focused on security threats from violent terrorist groups that have taken root, according to the speaker, in northern Afghanistan, and the increase in drugs trafficking. He dwelt on a number of partnership platforms within the Shanghai Cooperation Organisation (SCO), the Collective Security Treaty Organisation (CSTO) and the Eurasian Economic Union aimed at helping Afghanistan in security and economic development. He opined that stability and peace in Central Asia are closely related to the wider challenge posed to the modern world to accept and support the formation of a democratic, just and polycentric world based on international law and diversity.

U.S. Deputy Secretary of State John Sullivan commended the achievements in social development in Afghanistan that have allowed many children to attend schools and many people to access healthcare services, and urged the international community to continue its efforts. According to the speaker, the United States is looking for partners to start negotiations between the Afghan government and Taliban, which has yet to accept the calls of the Afghan leadership. “To achieve this end,” said Sullivan, “we must work together to isolate the Taliban, eliminate their sources of revenue and equipment and demonstrate with a united and unwavering commitment that the only place they can achieve their objectives will be at the negotiating table, not on the battlefield.”

Delegations from Kyrgyzstan, Uzbekistan, Tajikistan and Turkmenistan expressed their support for the idea of enhancing long-term cooperation with Afghanistan, citing successful examples of existing projects in economy and trade.

The debates reaffirmed the commitment of Central Asian partners to mutual projects with Afghanistan in the transit and transport, infrastructure, trade, investment and energy spheres, and agreed that there is undiscovered potential in Afghanistan that is obscured by security concerns.

Concluding the debates, the parties unanimously adopted a statement from the president of the Security Council reaffirming “its commitment to the sovereignty, independence and territorial integrity of Afghanistan and the Central Asian States,” and, recognising that “there can be no purely military solution to Afghanistan.” The statement expressed support for the UN secretary-general, and encouraged “making conflict prevention and resolution central to the work of the UN system in the region while stressing the importance of preventive diplomacy.”

The document touched upon a range of issues the UN offices and international community are working on in Afghanistan through Afghan-led processes. It emphasised that incorporating and strengthening coherence between all sectors is needed, while recommending using a regional approach where appropriate.