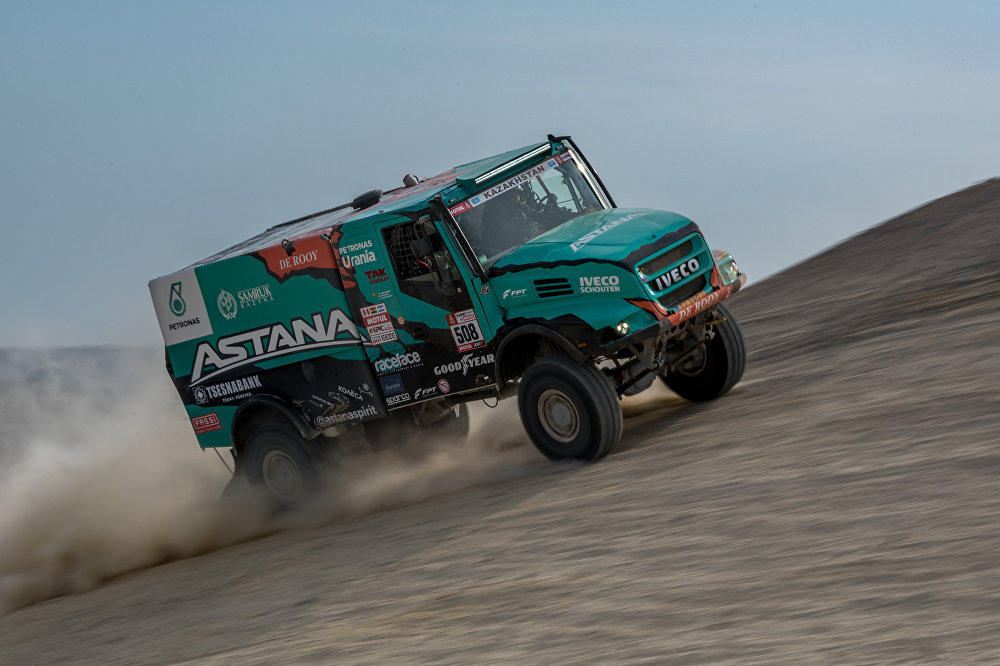 During the penultimate stage, Ardavichus noted that despite general fatigue he was extremely pleased with the drive. On the San Juan – Cordoba route, the truck never stopped due to technical problems, reported Kazpravda.kz. The crew pilot adhered to the tactics of a neat and slow ride, although the team slowed down several times to help their colleagues.

“Sixteen hours of driving. We entered the cockpit in the morning and got out at half-past 12 in the night. Have there been any breaks? Only when we helped other racers and there we worked so hard that our legs could not stand. Digging sand during 40-degree heat is something,” said Ardavichus.

In the final phase of the marathon the drivers had to pass the last stage – 119 kilometres of the special stage and 165 kilometres of the liaison to Cordoba, Argentina. The Astana team completed the stages in 61 hours, 35 minutes and 59 seconds, placing fourth in the general standings.

The current Dakar was the longest in many years, as the distance of the special stages was doubled. The winner in the trucks category, Eduard Nikolayev of the Kamaz-Master team, posted a time of 54 hours, 57 minutes and 37 seconds compared to last year’s 27 hours, 58 minutes and 24 seconds. Fewer than half of the declared trucks – only 19 of 44 – reached the finish line.

This year also marked the first time Astana was represented in the ATV category, with Maxim Antimirov and Shilov selected from the best candidates for their debut. Antimirov started the initial stages of the race with excellent results, but had to leave due to an injury in the special stage in Peru. Meanwhile, Shilov became a real discovery of the marathon and his sixth place finish in the general classification was a very high result for the newcomer. Ignacio Casale from Chile was the winner.

Austria’s Matthias Walkner was the best this season in the moto category. Team Peugeot Total reached the finish line first in the car category and Brazilian Reinaldo Varela and his co-driver Gustavo Gugelmin topped the list in the SxS race.

Dakar 2018 was held in Peru, Bolivia and Argentina. Teams had to overcome 14 difficult stages in various landscapes with diverse climatic and natural features.

Judging by previous years, many Dakar participants are used to the fact that the last sections of the marathon do not introduce global changes in the standings. Things turned out differently, however, in 2018. The final kilometres seriously affected the riders’ positions, as the crew of trucks leader Federico Villagra went off the track in the 13th stage.