By Anuar Abdrakhmanov in Sports on 12 December 2017

ASTANA – FC Astana secured a 1-0 win away against SK Slavia Prague in the sixth round of the UEFA Europa League’s group stage Dec. 8, becoming the first Kazakh club to ever make it to the European Cup playoffs. 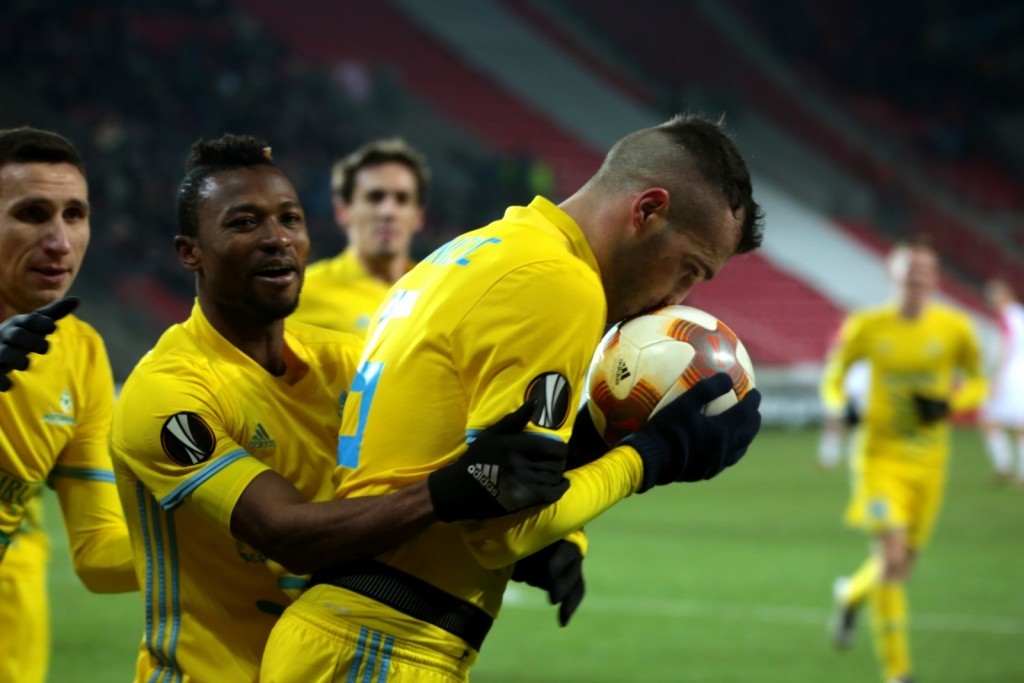 Slavia was one point ahead before the match, so Astana needed a victory to progress from the group. What made it worse was for the team was that the Kazakh football season ended just over a month ago and the team did not have any game practice, while Slavia has been playing regular matches in the Czech championship.

From the beginning, Slavia went on the offensive, but the Astana players coped with the opponent’s attacks. When the host team’s striker Tomas Necid took the field, their attacks became more intensive and unpleasant. Miroslav Stoch also made a good shot, although the ball hit the post.

FC Astana strictly followed the tactics of the game, waiting for the moment to go on a counter-attack and eventually saw a chance. After a pass from the penalty area, the Slavia defenders made a gross mistake trying to clear the ball, which helped Astana defender Marin Anicic send it into the empty net.

The pattern was fairly similar in the second half. Slavia actively pressed and Astana did not let the Czechs bring their attacks to the logical end. At times, however, it seemed Slavia could level the score. Necid went one on one with Nenad Eric, but hit above the net. He then tried to redirect the ball into the net with his head, but Astana’s goalkeeper saved it again.

The end of the game was nerve-wracking for the Kazakh fans, as Slavia had a few scoring chances and Astana struggled as if it was the last match in its life. The final whistle, however, marked the team’s victory and the Kazakh champs reached the playoffs, earning second place with 10 points. First place in the group went to Spanish Villarreal.

“This team is meant to make history. They changed the history of Kazakhstan’s football again. I am glad we were disciplined, although we had some problems in the second half, but it is always like this in matches of such level. The guys are heroes,” said FC Astana head coach Stanimir Stoilov after the match.

“This achievement made millions of the team’s fans and supporters happy. Your success will surely make a huge contribution to further development of football and sports in Kazakhstan. This victory also has a symbolic meaning ahead of the 20th anniversary of our capital city, Astana,” he wrote in his message.

The draw for the first game of the round of 32 was held Dec. 11 in Nyon (Switzerland). FC Astana drew Portuguese team Sporting CP. The first leg is scheduled for Kazakhstan for Feb. 14, 2018, while the return leg in Portugal will be played on April 1.