By Aigerim Seisembayeva in International on 26 December 2017 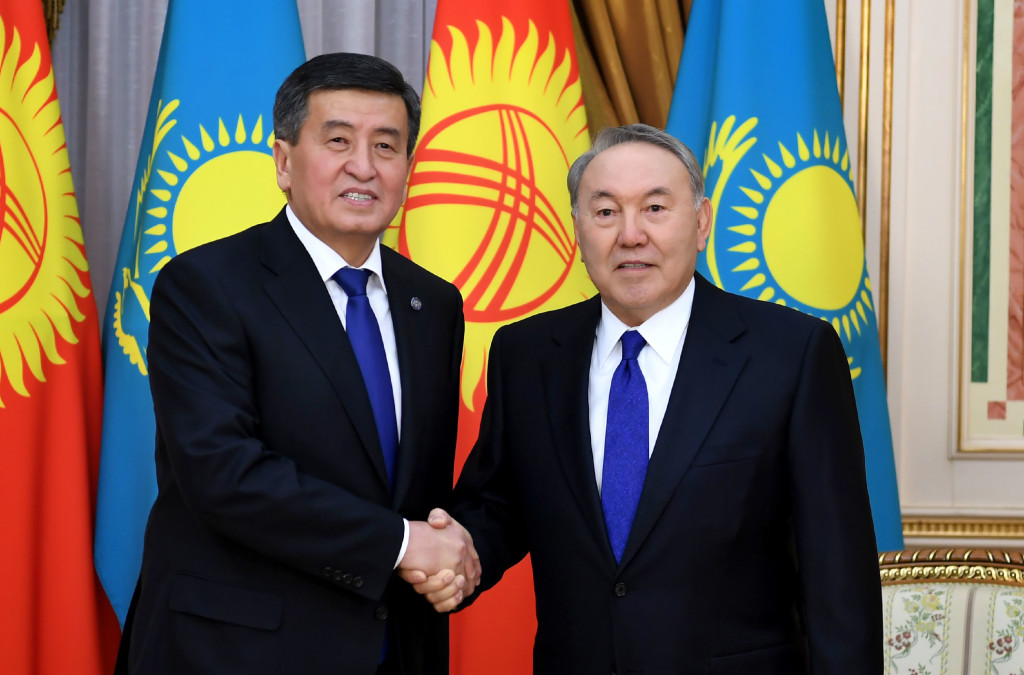 Having discussed the state and prospects of cooperation, the two heads of state signed a number of bilateral documents, including the treaty on the demarcation of the Kazakh-Kyrgyz state border and a joint statement while heads of the border agencies of the two countries signed an agreement regulating the border regime.

In remarks shared by the Akorda presidential office, Nazarbayev thanked his Kyrgyz counterpart for accepting his invitation and noted that the visit, the first for the new Kyrgyz President, is taking place on the 25th anniversary of diplomatic relations between the two countries.

He also highlighted the historically friendly nature of Kazakh-Kyrgyz relations.

“Kazakhstan and Kyrgyzstan are fraternal and allied countries. We have established a constructive and trustful dialogue in all spheres,” Nazarbayev told his guest.

He also dwelled upon the economic relations of the two states.

“I believe there are no issues that Kazakhstan and Kyrgyzstan could not resolve. Over 10 months, our trade turnover grew 13 percent. Kazakhstan is one of Kyrgyzstan’s main partners and investors that has invested about $650 million in the Kyrgyz economy. There are several hundred joint ventures. More than 700 enterprises with Kyrgyz participation are operating in Kazakhstan,” said the Kazakh leader.

He also spoke about his recent meeting with Jeenbekov within the framework of the Eurasian Economic Union.

“Not much time has passed since our meeting in Minsk. Our governments have carried out a very great and productive work and have removed the issues that worried both you and us. That is why today we can talk about what can be done in the future,” Nazarbayev said.

Jeenbekov thanked Nazarbayev for the opportunity to pay an official visit to Kazakhstan and for congratulating him on winning the Kyrgyz elections.

“My first visit to Kazakhstan is taking place in the year of a double anniversary – the 25th anniversary of diplomatic relations between our countries and the 20th anniversary of the signing of the Treaty of Eternal Friendship. Our countries have one history, one language, one faith and one culture,” said the Kyrgyz President.

He also stressed that a number of urgent issues were discussed with the Kazakh leader in a more private meeting that they had prior to a larger meeting of the two delegations.

“We will make every effort to continue strengthening our friendly, fraternal relations. After we signed the roadmap, our departments and ministries began to work more fruitfully,” said Jeenbekov referring to the document signed earlier in December in Astana outlining measures the two governments will be taking jointly to resolve issues relating to customs and border administration as well as phytosanitary and sanitary controls of food products in Kyrgyzstan.

After the signing ceremony, the heads of state expressed their confidence that the negotiations held and the documents signed would contribute to the further strengthening of bilateral relations.

“A solid contractual base of more than 150 documents has been created between the two states. Today, the most important bilateral agreements have been signed aimed at the further deepening the Kazakh-Kyrgyz cooperation. Those include the treaty on the demarcation of the Kazakh-Kyrgyz state border and the agreement on the state border regime. We also adopted a joint statement,” Nazarbayev told journalists during a joint press conference by the heads of state.

Jeenbekov called the signed documents historical: “I am convinced this will contribute to the border between Kyrgyzstan and Kazakhstan becoming the gateway of trust, good-neighbourliness and mutually beneficial cooperation. At the same time, we must strive for the border between us to be only a formality and for our peoples to be able to cross it without hindrance, as they did before. We are truly fraternal peoples. There are no closer people than the Kyrgyz and the Kazakhs,” he stated.

Pundits in Kazakhstan noted the significance of Jeenbekov’s visit coming so early in his presidency both for bilateral relations and cooperation in the wider regional context.

Dosym Satpayev, director of Risk Assessment Group, an Almaty-based think tank, said this was Jeenbekov’s only third visit abroad since inauguration a month ago, the first two being to Russia and Uzbekistan.

Given the intensive contacts between the Uzbek leadership with other neighbours in Central Asia in recent months, Satpayev believes the Kyrgyz leader’s regional outreach bodes well for the prospects of regional cooperation.

In a Facebook post, Satpayev said for regional cooperation to succeed there has to be the political will while economic pragmatism must lie at the foundation of such cooperation. “Therefore, technocrats and business people must rule in the area of regional cooperation who will quickly find the common language based that same pragmatism. There also has to be a stronger emphasis on people diplomacy, joint education, cultural, sport and other projects… The bottom line is, nobody but the countries of the region will be able to resolve our regional problems.”