ASTANA – A memorandum of understanding between the Kazakh Energy Ministry and the Canadian Ministry of Foreign Affairs, Trade and Development “On the property contribution in the form of a station for radionuclide monitoring of noble gases to strengthen verification of compliance with the Comprehensive Test-Ban Treaty (CTBT)” was signed Nov. 29 at the Kazakh Ministry of Foreign Affairs in Astana. 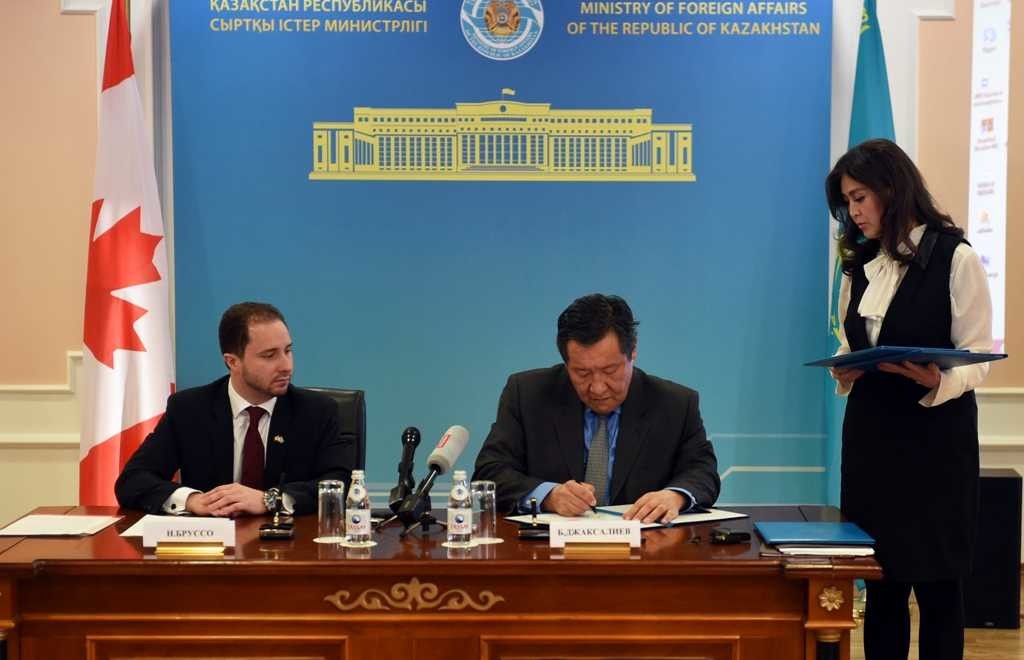 According to the document inked by Kazakh Deputy Minister of Energy Bakytzhan Dzhaksaliyev and Canadian Ambassador Nicholas Brousseau, Canada will provide Kazakhstan with a radionuclide and noble gas detection station, a facility that will contribute to strengthening supervision in implementing the CTBT. The Canadian side proposed installing a radionuclide station in Kazakhstan thanks to Kazakh President Nursultan Nazarbayev’s policy in the non-proliferation of nuclear weapons, a stance recognised by the world community.

“As a laboratory complex, the station is a unique one not only in Kazakhstan but also in all of Central Asia that will detect radionuclides and monitor noble gases in the atmosphere. Analysis of those gases will identify the cause and nature of any explosion in the range of 5,000 kilometres,” said Dzhaksaliyev after the signing ceremony.

He noted the station will be located near the National Nuclear Centre in Kurchatov or at the Semipalatinsk nuclear testing site. The station will probably start operating by the end of next year following all document and equipment transfers as well as specialists’ trainings to manage it.

Brousseau said the station, at a cost of Can$1.6 million, would contribute to the CTBT’s International Monitoring System (IMS) by detecting radioactive emissions resulting from nuclear testing. It will ensure eliminating the gap in the IMS’s Central Asian coverage.

The IMS, a key element in the CTBT’s verification regime, consists of 321 monitoring stations and 16 laboratories that check the planet for indications of a nuclear explosion.

The facility in Kazakhstan will be publicly funded and operated by the National Nuclear Centre under the country’s Ministry of Energy, the nation’s leading scientific organisation in the field of peaceful use of nuclear energy and support of the nuclear non-proliferation regime, ensuring nuclear and radiation safety.

Kazakhstan and Canada are participants in the CTBT and the Treaty on the Non-Proliferation of Nuclear Weapons. Both countries have the same interests in strengthening the multilateral regime for nuclear non-proliferation and disarmament. During the station’s operation, Kazakhstan and Canada will actively cooperate with the Comprehensive Nuclear-Test-Ban Treaty Organisation.