By Dana Omirgazy in Nation on 5 December 2017

ASTANA – Kazakh President Nursultan Nazarbayev met Dec. 1 with the participants in the 100 New Faces project. The project includes 102 exemplary individuals from all over the country, whose sustained efforts could inspire other citizens of modern Kazakhstan. 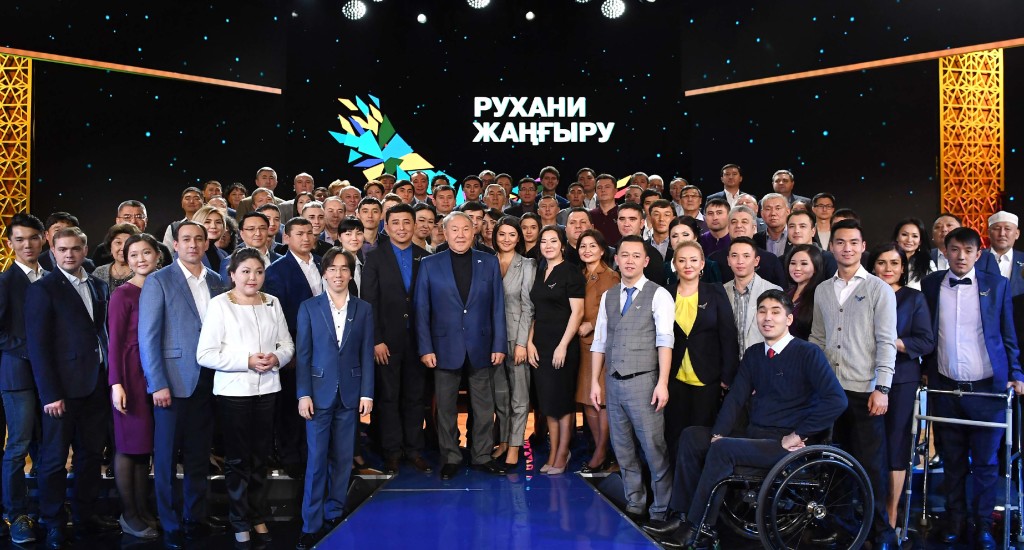 “I have read your stories, your life. You live in this society, you work and you create. You have come forward and entered the list of 100 new faces, becoming leading personalities. I congratulate you,” the President told the participants.

The project, kicked off June 7 to identify inspiring individuals from different professions. Nazarbayev proposed the idea in the wide-ranging policy article, “Course towards the future: Modernisation of Kazakhstan’s Identity,” published April 12.

More than 2,000 candidates applied and were reduced to 102 after nationwide voting.

“The world rushes forward. Blink and you’ll miss it. Such a time. My time was different, yours is different. We live in the world of competition: a state competes with a state, the people compete with the people and a man competes with a man. All the time you need to move forward, as if you are flowing against the current. If you stop, the water will take you back. The same is true of life. This is an era of information technologies. Artificial intelligence is progressing. Today, the most severe problems of mankind are being solved, the most incurable diseases will be cured. Artificial intelligence will be everywhere. Everything is changing. And what about consciousness? That is the question. Together with this, people’s consciousness should also change,” the President told the gathering.

Among the 102 faces are 13 sportsmen, 18 scientists, 10 figures of culture, 18 medical workers, 13 business persons and 30 social workers. Their names and stories of strength, inspiration and success can be found at 100esim.el.kz.

Some of them gave a speech during the meeting held on the Day of First President. They shared their challenges and achievements.

“After graduating the Physics and Mathematics School, I began to study robotics. A few years ago, I caught sight of the statistics that more than 14,000 people need prosthetics in Kazakhstan. This figure struck me and I wanted to fix it,” he said.

This year, he founded the MBionics company, where he and his colleagues are working on the development of new versions of bionic prostheses. He plans to work on a similar development of the elbow, shoulders mechanism and other extremities. Bekturganov hopes that by applying new technologies, he can make people’s lives much more comfortable.

A native of Uralsk, 32, Saida Kalykova is the soloist of the State Academic Philharmonic of Astana. Kalykova was an unusual child. At seven years, she entered the music school without her parents’ permission. Having quickly mastered the musical notation, she began playing the piano. But in 1994, after brain surgery she lost her sight. Nevertheless, she continued to study music. At the age of 13, she gave her first musical concert and at the age of 15 she presented her first musical works.

“Music became the meaning of my life. I hope my story will motivate people to be happy. I think that we should never give up. We must always go forward,” she told the President and meeting participants.

One more story was told by a doctor who treats the youngest patients, babies. Heart surgeon Gulzhan Sarsenbayeva, 42, was among those who conducted pioneer research in the development of paediatric heart surgery in Kazakhstan. Just a few years ago, many Kazakhstan citizens took their children with heart defects to foreign clinics. Now, such surgeries can be conducted in the country.

“I always visit maternity homes, regional hospitals, I can work on Saturdays and Sundays. But I do not feel tired. When a person loves his work, this gives him some energy. The life of a young child is in our hands. For us, it’s a great happiness to see healthy and strong kids who were ill, and, most importantly, to see the happy eyes of parents,” she said.