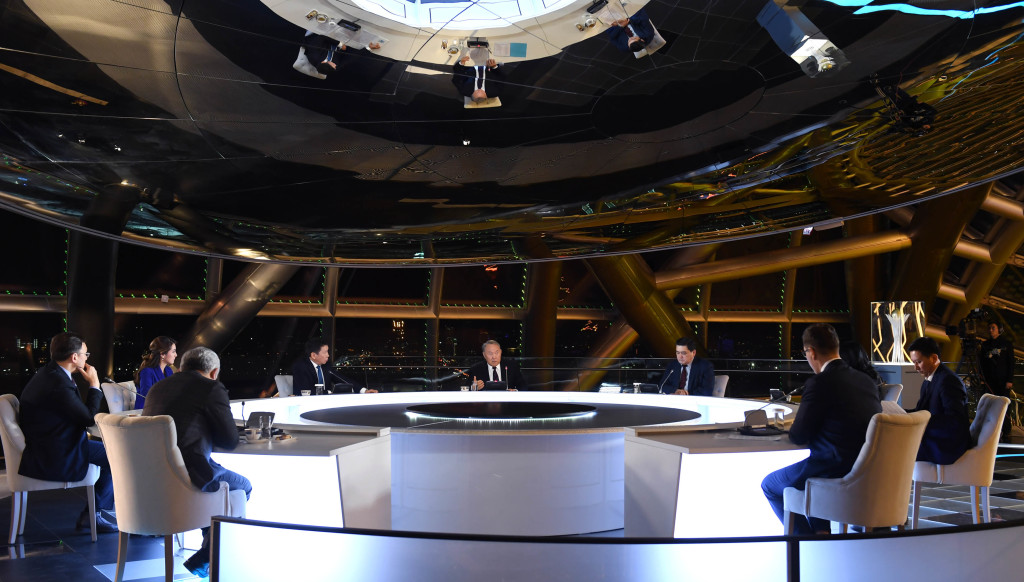 The president also discussed agriculture, anticorruption efforts, decentralization of presidential powers and challenges faced by national banks in 2017. The press briefing was organised at the EXPO 2017 Nur Alem pavilion and was broadcast on national television on Dec. 25.

Nazarbayev said that domestic and global changes during the country’s 26 years of independence precipitated the need for the constitutional reforms launched earlier in 2017 which transferred authority and responsibility from the president to the government for specific executive matters, as well as rights to parliament as the legislative power to control the executive power.

“We have made changes before, because life requires it, everything develops and moves. I believe that we have made a significant step forward in distribution of power and authority. Thirty-five powers, which, according to the law, were reserved for the president, are transferred to parliament or to the government. The role of the parliament has greatly increased, I think, and the role of the government has risen,” he said.

The President stressed the multiplier effect of the 28th Winter Universiade in Almaty last February and the EXPO 2017 international specialised exhibition in Astana on the national economy. These developments stimulated domestic tourism, the development of small and medium-sized businesses, housing and transport, he noted. They also spurred infrastructure development in cities outside Astana and will help it become a two million population city by 2025-2030.

Starting Jan. 1, 2018, the Astana International Financial Centre (AIFC), centres of green technologies and IT start-ups will operate on the site of EXPO 2017. NASDAQ and the Shanghai Stock Exchange are already working with the AIFC, and the World Bank, the European Bank for Reconstruction and Development, the Asian Development Bank, the Islamic Development Bank intend to participate in the work of the AIFC, which is similar to Dubai’s financial centre. The head of state also noted the centre will be based on the principles of English common law and ensure the rule of law to protect investors’ funds.

Speaking on the issue of state support of banks, the President noted that the urgency of improving the banking system is associated with the need to finance the economy, in particular small and medium-sized businesses. Meanwhile, the National Bank and the Kazakh government are reorganising inefficient financial and credit institutions. The state will help banks in which most of the capitalisation is made at the expense of private shareholders’ funds.

Despite global financial challenges, some of Kazakhstan’s development priorities remain unchanged. The President paid attention to the transportation and logistics spheres. Particularly, the importance of container transportation was emphasised, taking into account the transit potential of Kazakhstan, the complementary nature of the Nurly Zhol programme and the China-led Belt and Road initiative, as well as the Western Europe-Western China highway and the Kuryk sea port in the Caspian Sea.

Touching on the problems of air pollution in cities, the head of state noted that the government plans to address the gasification of the south, north and centre of the country. Providing liquefied gas supplies to Astana, equipping with electric transport, development of the metro, transfer of public transport and Almaty Cogeneration plant to gas are envisaged.

The main reasons for the shortage of fuel in Kazakhstan in autumn, said the president, were the “complete bungling and omission of the relevant responsible bodies and people.” However, after the reconstruction of all three refineries, Kazakhstan was able to provide itself with these resources and has the ability to export about one million tonnes of oil-based products.

Priorities in the development of the Kazakh agro industry should be the cooperation of small farms, the processing of products for sale with large added value, the regulation of subsidies and the development of science and agricultural genetics, he said.

On implementing the “Rukhani Janghyru” modernisation programme, Nazarbayev reminded of the goal set for entering the 30 most-developed countries of the world by 2050, which requires not only economic and political development, but spiritual as well.

“A country of strong spirit will be able to withstand any difficulties, so we believe that it’s time to pay attention to our spiritual development,” Nazarbayev noted.

The President also shared his expectations for the 100 New Faces of Kazakhstan project, which tells the stories of mostly young people who have achieved incredible success in music, painting, science and other fields.

The Tugan Zher projects for the revival of the Small Homeland, 100 New Textbooks and Sacred Geography of Kazakhstan projects are all part of the Rukhani Janghyru programme.

The transition of the Kazakh language to the Latin alphabet was also addressed at the press briefing. Currently, there is an approved version of the alphabet, but work is being done to improve and implement it. At the same time, the head of state drew attention to the fact that the Cyrillic alphabet in Kazakhstan will be preserved, as it is naturally used to write in Russian, which enjoys a constitutional status in the country, and given the continued implementation of the tri-lingual education in Kazakh schools.

The President stressed that now schools are switching to new teaching programmes, on which the level of teachers’ salaries depends. They will be able to receive a 30 percent higher salaries. In 2016, the salary of teachers, doctors and civil servants increased by 30 percent. At the beginning of 2018, there will be an increase of 36 percent, in 2018-2019 by 50 percent. A similar trend will be established in Kazakh clinics and hospitals, whose effective staff can earn more.

During discussions on installing monuments and renaming facilities, including the Furmanov street in Almaty which was recently named after Nazarbayev by the local authorities, the President said that he gave his consent only to the appropriation of his name to Nazarbayev University. At the same time, he had fully agreed with the author’s opinion of one of the numerous letters addressed to him: “Nazarbayev does not need stone monuments, since he built the capital.”

“I always oppose it, we have to remain in history with the achievements, and, we all know well from history what happens to monuments with the passage of time,” he said.

Nazarbayev also outlined the primary challenges to transitioning to a new pension system and compulsory medical insurance. At the same time, he noted the need to take into account people who cannot make contributions such aschildren, those with physical or mental challenges and students. Nazarbayev said pension savings were united in the Single Accumulative Pension Fund to ensure their integrity under the control of the state.

Beginning Jan. 1, 2018, the size of pension payments for age and length of service will be increased by 8 percent. In addition, the appointment of a basic pension will be carried out according to a new method – depending on the length of participation in the pension system. All retired pensioners will receive a one-off recalculation of the basic pension.

Commenting on the housing issue, the President noted that “all countries have a housing problem, it has always been and will be there.” However, Kazakhstan’s financial mechanisms provide an opportunity to acquire housing through savings with concessional lending, rent with subsequent repurchase and without the right to buy out, individual housing construction, including in the framework of the Nurly Zher Programme.

The President also touched on anticorruption efforts, labour migration, the transition to a green economy and the implementation of the Digital Kazakhstan programme. A special digitalisation forum which will bring together representatives from Kazakhstan, Russia, Belarus and other countries is planned in Almaty in February.

In addressing foreign policy, Nazarbayev spoke about relations with Russia, Kyrgyzstan and Uzbekistan, as well his famous anti-nuclear weapons stance.