By Aigerim Seisembayeva in Nation on 21 December 2017 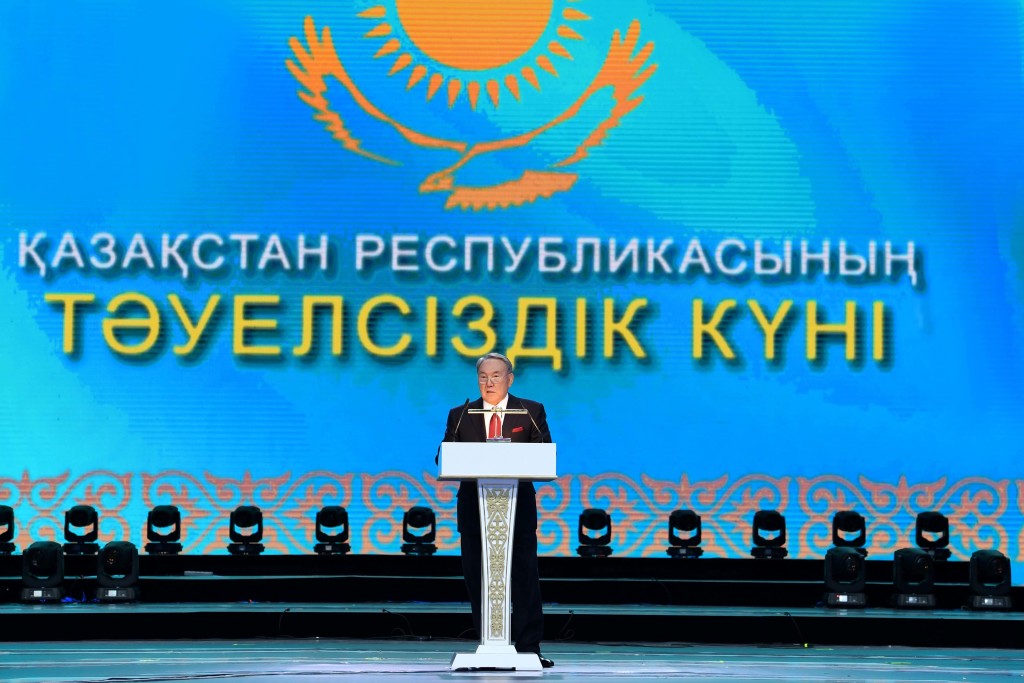 “This day always brings feelings that do not abide the time – a special combination of pride, joy and excitement,” he said on Dec. 15.

Nazarbayev said that Kazakhstan over the years since independence has achieved rapid growth and created a solid platform for sustainable development in the future.

“An entrepreneurial class has been created. More than 1.2 million Kazakhs have their own businesses, which provide a quarter of the total national income,” said the head of state.

He noted that the Nurly Zhol infrastructure development programme has become an effective anti-crisis solution that is providing a reserve for the future.

“When severe winds blew, we built not fences, but mills. In seven years, 24 new manufacturing sectors appeared. The effect of the programme of industrial-innovative development is measured not by facilities [launched], but by whole branches [created],” said Nazarbayev.

The head of state specifically focused on the success of economic reforms, which became the basis for strengthening the social function of the state.

“For the first time in history, the population of our country exceeded 18 million, birth rate increased 1.5 times. Kazakhstan this year reached fourth place in the world in terms of primary education coverage. Life expectancy increased by 4.5 years and amounted to 72.5 years. Private housing has become a reality for more than 1.1 million families,” said the President.

“Our capital hosted the EXPO international exhibition. This year alone, Kazakhstan hosted the World University Games, the historic SCO [Shanghai Cooperation Organisation] summit, the first OIC [Organisation of Islamic Cooperation] summit on science and technology and the intra-Syrian peace talks. Beginning January 2018, our country will assume the presidency at the UN Security Council,” he stated.

Nazarbayev also noted the recent meeting with the participants of the 100 New Faces project and stressed that the main value of independence is people.

“These people have chosen a motto – not to demand from the state, but to offer their ideas, creative energy and hard work. This is the living manifesto of our success! This is the generation of Independence,” Nazarbayev said.

He defined the transition from quantitative growth to qualitative changes as an important condition for joining the world’s top 30 most developed countries.

“Having strengthened Kazakhstan as an established state, we proceeded to comprehensive modernisation, to the creation of a new quality of Kazakhstan’s Independence. In order to achieve this, we launched the political, economic and spiritual modernisation,” said the President referring to the three-pronged reform package he had initiated earlier this year.

Nazarbayev focused specifically on the implementation of the Rukhani Janghyru programme to modernise the national identity.

“This year we celebrated Alashorda’s 100th anniversary. That movement made a decision on the transition of the Kazakh alphabet to Latin script. The transition to the Latin alphabet has its own deep historical logic. This is not only the fulfilment of the dreams of our ancestors, but also the way into the future for generations to come,” said the head of state.

“I want to thank all Kazakhs for your trust that has given me the strength to carry out all the transformations, for your sincere participation and selfless efforts,” Nazarbayev stated.

During the awarding ceremony, President Nazarbayev stressed the role and efforts of every Kazakh citizen in the country’s achievements and praised the award-winning citizens

“Today we mark with awards and prizes the merits of those of our fellow citizens who contributed to the development of our homeland,” he said.