By Dana Omirgazy in Business on 7 December 2017

ASTANA – Eleven agreements and memoranda worth more than $3 billion were signed at the Dec. 5 Kazakhstan Global Investment Roundtable, which gathered investors from more than 30 countries in advance of Industrialisation Day in the Kazakh capital. 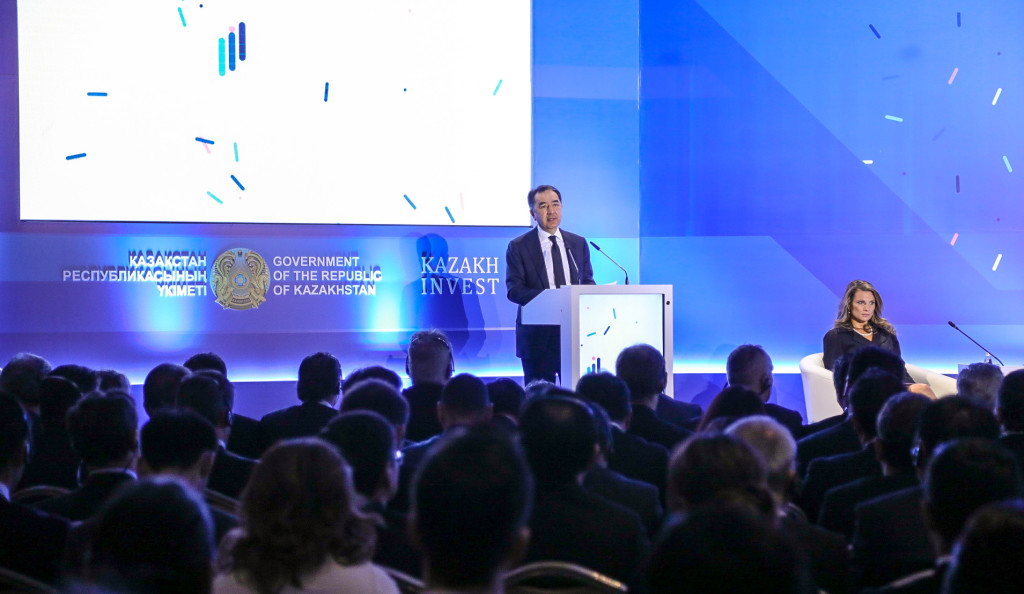 “The government aims at forming a large-scale and sustainable strategy to stimulate a new generation of investments in Kazakhstan. Today’s meeting is one of the important steps in this direction and we are open to your suggestions and new ideas,” he said to welcome the participants.

He outlined measures taken in the country to improve the investment climate and expand investment opportunities.

“First, after the difficulties of 2014-2016 linked with world changes, the economy of Kazakhstan has stabilised. Thanks to the adopted measures, the GDP grew 4 percent in the first 10 months of this year. For the first time [since the slowdown], private investments exceeded state ones,” he said.

Sagintayev added implementing major new reforms, including constitutional reform, modernisation of Kazakhstan’s identity and a strategy on a new model for economic growth implies the country’s entry into a new stage of development and facilitates its ambition to enter the top 30 developed countries of the world.

Foreign investors can benefit from the nation’s policy on developing science-intensive production, renewing the basic branches of the economy and the agro-industrial complex, he said. The third stage of modernisation opens new opportunities for investors in various sectors of the economy, such as metallurgy, machine building, agro-industrial complex, processing and the food industry, Sagintayev said.

“Today, Kazakhstan is one of the world leaders in the production of wheat and flour. We are strengthening this advantage, but we are also carrying out structural reform of the agricultural sector, diversifying crop areas in line with market demand,” he noted.

Investors gain access to the largest markets through Kazakhstan’s integration policy within the Eurasian Economic Union (EAEU). Sagintayev believes it is important to establish effective trade relations with neighbours to raise the country’s attractiveness, especially with China.

“The remaining trade barriers with China will be regulated and removed as early as 2018. This will open a very large market. Agricultural and organic products manufactured in Kazakhstan are in high demand in China,” he said.

According to PriceWaterhouseCoopers and the World Bank, Kazakhstan is 18th of 189 countries in terms of investment climate favourability, he noted. The nation is also ranked 36th of 190 countries in the World Bank’s 2018 Doing Business ranking. In that same ranking, Kazakhstan was rated first among the 190 countries considered in Protecting Minority Investors. In addition to protecting minority investors, the country ranked sixth in enforcing contracts.

“Nevertheless, the government is focused to further promote Kazakhstan in the Doing Business rating. Thus, the new seventh package of legislative amendments has been prepared to improve the business environment at national and sub-national levels,” said Sagintayev.

“Over the last 10 years, approximately $250 billion of FDI was attracted in various sectors of the economy. We are grateful to every investor who came to Kazakhstan and implements projects here. We hope their example and today’s conversation will inspire you to conquer new business heights in Kazakhstan,” he added.