ASTANA – Hilton announced the official opening Nov. 2 of Hilton Astana, the first hotel in Kazakhstan under the brand of Hilton Hotels & Resorts. The new five-star hotel promises to provide excellent service, as well as meeting venues that have very few matches in the capital. Hilton’s Senior Vice President for Continental Europe Jochem-Jan Sleiffer shared his outlook on the new hotel, as well as the company’s goals and prospects in the city and hospitality industry trends. 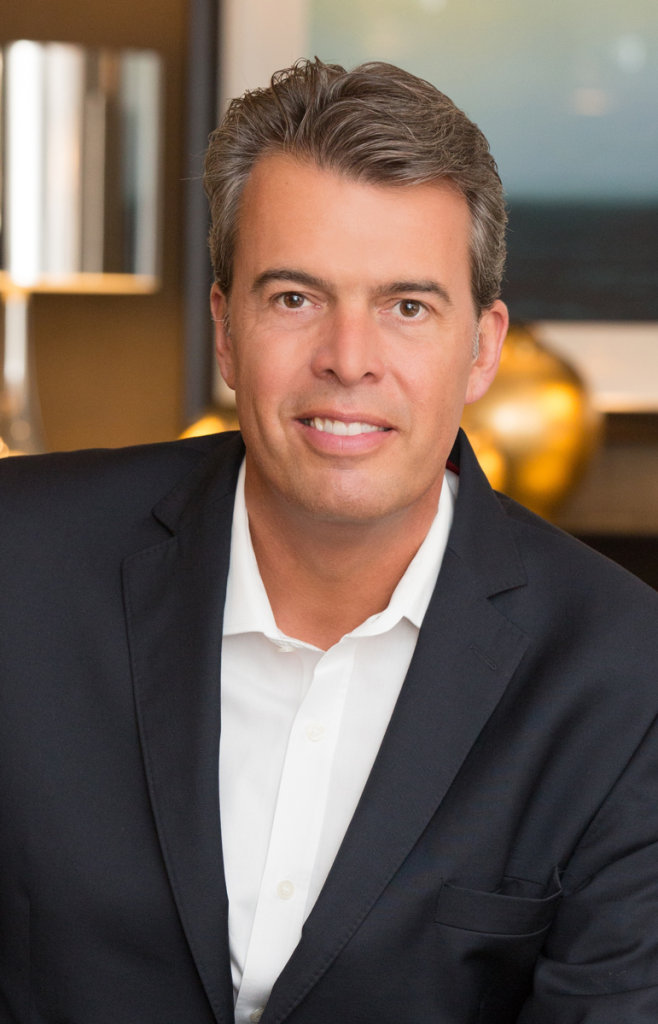 A 27-year employee, Sleiffer manages all operations for Double Tree, Curio and Hilton hotels in Continental Europe, from Amsterdam to Astana, Stockholm to Nicosia. The Kazakh capital is currently the eastern-most location in his map.

The more than 4,000-square metre complex offers a unique getaway for residents and guests including 253 rooms, a luxury spa complex and event venue. The hotel has nine meeting rooms, as well as a ballroom with a capacity of 900, according to the company.

“If you look into the market, the main difference of this hotel is the meeting space. We can host big meetings. This is a real meeting hotel. I think this is where we want to make a difference in years to come,” said Sleiffer.

He believes the capital needs to focus on attracting more international meetings.

“It will have a lot of regional meetings, but I think we have to attract more international meetings coming out of Russia and Commonwealth of Independent States (CIS) countries, but also out of Western Europe. This is going to be a main job for all of us in the tourism industry – to make sure we attract foreign meetings, because they will bring a lot of good business to the city,” he said.

An increase in meetings will result in more people employed in secondary jobs, not only in the hotel, but around the city.

“We have to work to attract people from outside together with the Astana Convention Bureau, with the local government and Air Astana,” he added. 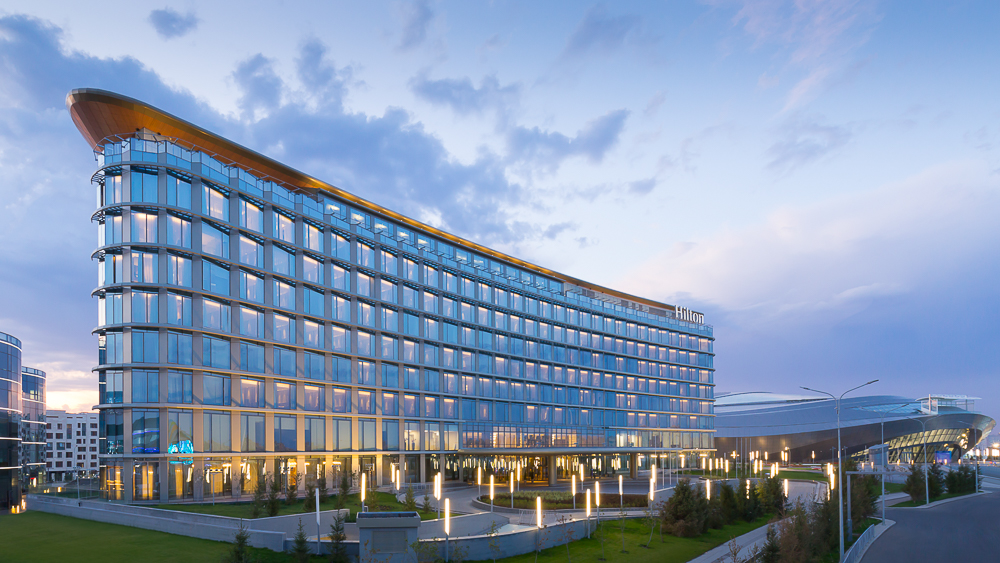 Sleiffer noted the urban area has done a good job in creating the infrastructure in the last few years, as international meeting organisers would not be lured without it. He added the nation has “a very stable economy, which is growing fast.”

“Kazakhstan is one of those countries that is developing right now, so there are a lot of opportunities for us to actually grow here. That is one of the reasons why we are going to be present in this market with three brands – Hilton, Hilton Garden Inn and Hampton by Hilton next year. So, we will have five, four and three-star hotels. We will have everything to give a choice to our travellers,” he said.

He thinks Kazakhstan has a good future and is a safe country.

“I think there are massive opportunities for international meetings, because the country is in the centre of Central Asia. It can attract people from India, the Middle East, Russia and Europe. I think it can be a great hub going forward,” he said. 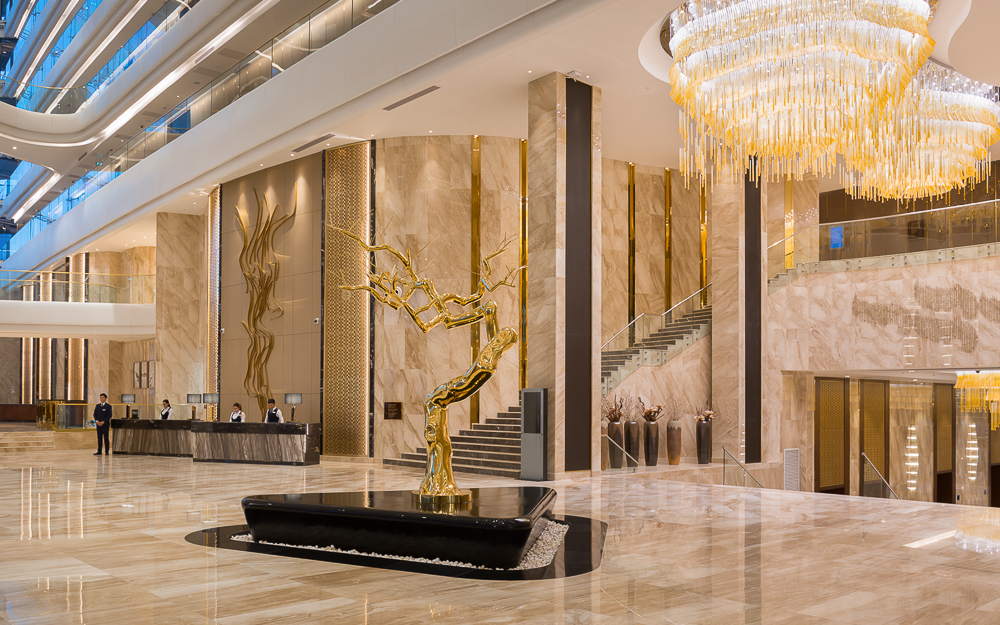 “These people are travelling around the world and they are looking for places to actually stay,” he said.

Sleiffer feels the main issue in the capital and the industry overall is the lack of trained people.

One in ten jobs in the world is in the hospitality and tourism industry, providing approximately 12 percent of world’s GDP. Sleiffer applauded the attitude of the Kazakh people to join the industry – they are smiling, they want to learn, to understand, he explained.

“There are many Kazakh students in Swiss, Spanish and Dutch hotel schools. One of the things we want to do is to get these people here, educate them, send them abroad to work in Barcelona or London, for example, and come back with knowledge a couple years later,” he said.

“Ideally, in the future I want all general managers here to be Kazakh. With the right amount of training, which we do, we will be able to face those challenges going forward,” he added. 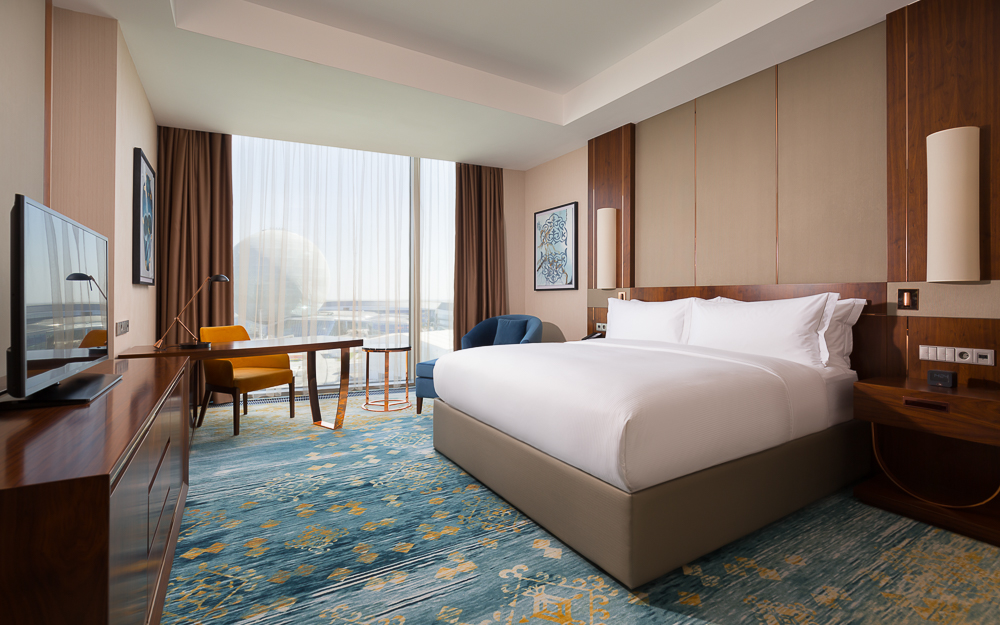 “Today, people are looking for experience if they come to the hotel; it is not only about bed and breakfast. So, we are trying to digitalise most of the standard things, such as check-in. It can be done via phone now. For instance, in hotels in the United States phones can be used as digital keys,” he said.

Two months ago, Hilton introduced Connected Room, a personalised experience for guests. The technology is used in some hotels in the U.S., but will take several years to reach the Central Asian region.

“When you walk into the room, it will know, using your phone, that you prefer CNN on the television, for example, or you prefer the room temperature at 22 degrees. The room will know what kind of music you prefer. That is going to be one of the things in the future. They know who you are by the phone you have,” he said.

Another trend is a customised experience not only in the room, but beyond it.

“We want to make sure that our team members will be able to tell customers about the great exhibition in Amsterdam, if they go there, for instance, because they know guests like museums. Or if a guest likes the zoo, the team will have special tickets ready for him,” said Sleiffer.