ASTANA – In an away match on Dec. 21, Barys lost to Dynamo Moscow 3:5, but managed to at least shred the nerves of the home team in the rollercoaster game. Top scorer for both Barys and the league Nigel Dawes missed the game because of an injury. 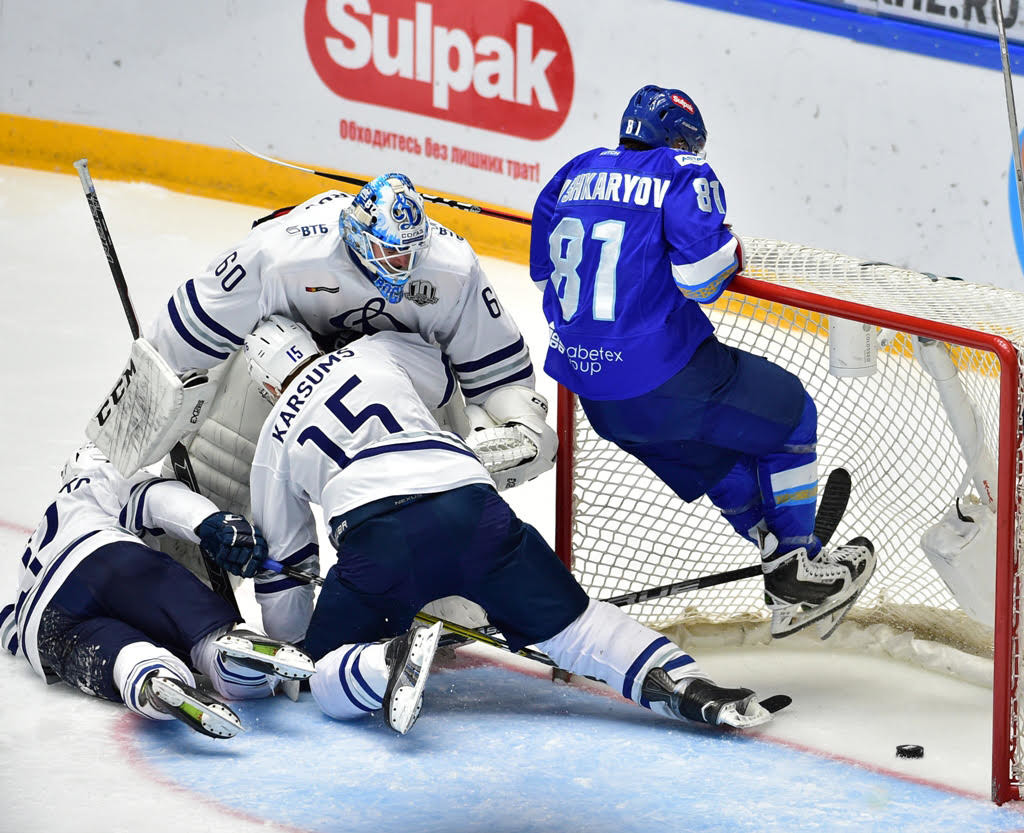 The match started with Dynamo’s Danil Tarasov scoring in the first minute of the first period – promising a high-scoring game for the local audience of 4,479 people at Moscow’s VTB arena.

But Barys, recently struggling to straighten out their win-loss ratio, answered back soon enough: Vladimir Markelov netted an unassisted one at 13:12 and tied the game.

After the intermission, Barys’ Roman Starchenko scored at 28:02 and put his team ahead by one. But about 10 minutes later, Dynamo tied things up again with a goal by Nikita Komarov, whose shot deflected off a Barys defenseman and slipped by Henrik Karlsson. Just two minutes later, Tarasov scored his second of the game, nicely sliding the puck into the top left corner past the goalie and changing the course of the game. With his second goal, Tarasov boosted the confidence of the team and shook up Karlsson.

In the beginning of the third, however, Barys came back to score again right off the face off in Dynamo’s zone. This time, it was James Wright giving fresh hope to his team.

Tied at 3:3, the teams were looking to break the game their own ways. Dmitry Vishnevsky of Dynamo gave his team the edge two minutes later to make it 4:3 and Dustin Boyd sealed the deal with another goal against his former team with over five minutes to go in the match.

“The guys fought well,” Evgeny Koreshkov, head coach of the team, said after the game. “When the score was 3:3 they lost concentration and allowed a goal. Missed out by a little. On the whole no complaints, they fought until the end,” he said.

Barys has been struggling to recover from a series of losses since the second week of November. Astana’s team has won only twice since then and lost 12 games. In several of them, Barys was shut out.

Rumours that Barys is looking for a new goalie after Karlsson’s recent unimpressive matches were quickly dismissed by the team. Karlsson is apparently applying for Kazakh citizenship in order to play for the national team.

This was 22nd loss for Barys, which put the team in sixth position in the Eastern Conference. It slipped into the seventh position on Dec. 22 as Traktor from Chelyabinsk won against Vityaz from Podolsk and moved into the sixth spot.

Barys will face Neftekhimik Dec. 23 in Astana and is starting a series of home games. If they win at least four of these, they will have a chance for a playoff spot.