By Anuar Abdrakhmanov in Sports on 21 November 2017

ASTANA – FC Astana head coach Stanimir Stoilov is among those who stand behind the team’s achievements. The club, managed by the 50-year-old Bulgarian, won the national championship this year for the fourth consecutive time. No other Kazakh coach has managed the feat. 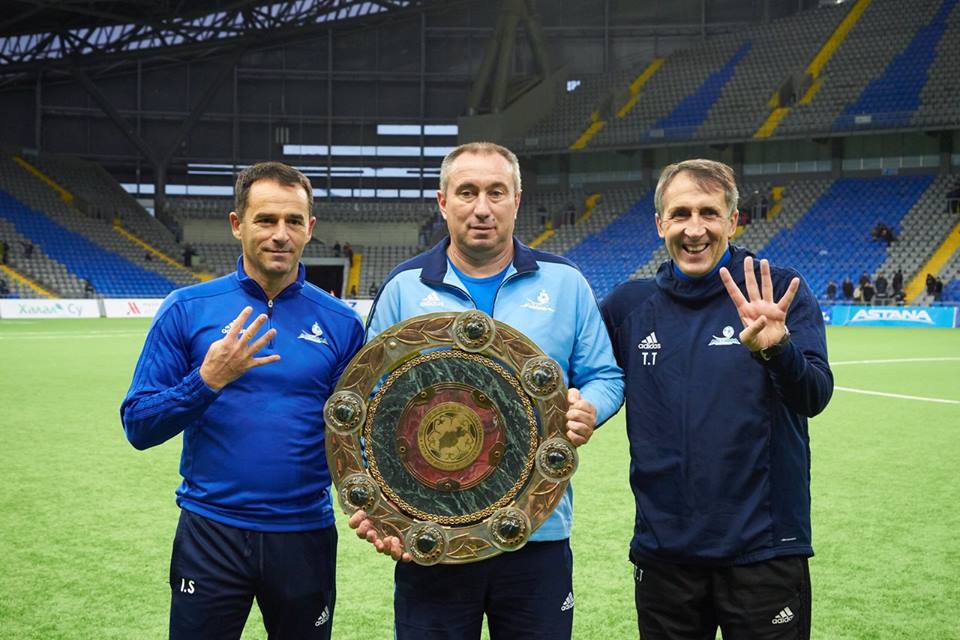 Astana demonstrated decent play recently both in the domestic and international arenas, playing for the third year at the European club tournament group stage. Atletico Madrid, Benfica, Celtic FC, Galatasaray SK and Olympiacos are some of the serious opponents who failed to beat Astana on at least one occasion.

“I think the season was long and difficult,” said Stoilov. “How did it differ from others? It is hard to tell. Our team seems to have gained more confidence with every year. That is why it gets easier to secure wins.”

“The first season was the most challenging one,” the coach explained. “After that, the team played better. I guess our schedule has been quite busy during these years, especially in summer. We had many long trips and many great emotions. If there had not been any difficult games in Europe, we could have finished the championship earlier, but all is well that ends well. It is always hard to demand from the players to give it their all when they have such energy-intensive matches at European competitions. The guys are great. It is not easy to play with such a tight schedule, but we did it. This means we can do even more.”

Needless to say, when a coach secures great results each time he gets a lot of good offers to move to another team. Foreign newspapers write that Stoilov is one of the candidates to coach Turkish football fan favourite Fenerbahce SK. He said he had not decided on his further plans and intends to discuss it with his current club.

“I have not received any proposals yet to extend the contact with Astana. I always said that when developing the club, it is important for the management to understand which way we choose. If they need me, we will sit down and talk. If we raise the team’s class, we can achieve better results. The team needs more strong players, so sponsors need to understand it. First of all, we will talk about the team’s development,” he added.

On Nov. 23, Astana will host Spanish favourite Villarreal CF. If the Kazakh club wins the match, it will be a historic achievement, as none of the country’s football clubs has ever made it out of the Europa League group.

“We will prepare. I hope we can help the players get in the right mindset. I am very worried about this game. Villarreal is a very strong team, but everybody here expects success from us. We play well at home and I hope we will show a good game and deserve a victory this time,” said Stoilov.

The coach is counting on the support of the Kazakh fans in the home match.

“Despite the fact that it is already very cold in Astana, it will be warm at the stadium. You know that Astana has not lost a single match at home in the latest European tournaments. This is, to a large extent, thanks to our fans who always root for us. The team needs the support of its fans. We win together and we lose together. If the fans cheer for us, the team will do 120 percent,” he added.