ASTANA – Celebrating the 23rd anniversary of Kazakh – Saudi Arabian relations, Ambassador of the Kingdom of Saudi Arabia to Kazakhstan Dr. Dahir Mootish J. Alenaze discussed the state of cooperation and priorities for his term in a recent interview with The Astana Times. 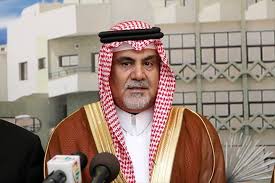 Alenaze also said the two countries can expand bilateral trade that amounted to $11.8 million between January and July this year with Saudi exports accounting for $3.13 million and Kazakh imports $8.65 million.

“We need to note here that the growth of trade turnover is impeded by difficulties in transportation of commodities. The sides are considering the possibility of establishing a special investment fund that will fund joint projects in Kazakhstan and this will probably contribute to the increase in trade turnover volumes between the two countries,” said Alenaze.

A lack of direct commercial flights also impedes aspects of cooperation but, said Alenaze, the governments are trying to rectify that.

Alenaze began his post last March and hopes to strengthen cooperation and stimulate financing and support of infrastructure development projects in Kazakhstan through the Saudi Arabian Development Fund.

Saudi Arabia is among the biggest investors in the Kazakh economy and has funded numerous projects, he said, including the construction of socially significant facilities.

Saudi Arabia helped fund the construction of the building of the Senate, an upper chamber of the Kazakh Parliament, part of the Osokarovka-Vishnevka highway, the Children’s Tuberculosis Hospital in Semey, the Cardiology Centre in Astana and a mosque in Petropavlovsk. The kingdom also supplied equipment to the Scientific Centre of Pediatrics and Pediatric Surgery and the Maternity and Childhood National Science Centre in Astana.

“I also plan to focus on deepening economic, science and technical cooperation in oil, metallurgy and industry across all levels,” said Alenaze, highlighting additional potential in nuclear and renewable energy, as both countries possess significant resources.

“Saudi business people are willing to cooperate in metallurgy and mining and allocated $50 million for that purpose. If new fields are discovered, Saudi Arabia is ready to build plants there, which will certainly have a positive effect on economy and society and will contribute to creating new workplaces,” he added.

Agriculture is a field of particular interest to Saudi Arabia, said Alenazi, as the kingdom intends to import Kazakh mutton in large volumes, approximately 5,000 – 6,000 heads per month.

“This will certainly be useful for Kazakhstan as well, as many Kazakh agriculture companies need investments,” noted Alenaze. Saudi Araba is ready to finance Kazakh projects in these fields, he added.

During President Nazarbayev’s 2016 visit to Saudi Arabia, he invited Saudi business people and heads of leading companies to participate in Kazakh infrastructure development programmes, including a privatisation programme envisioning the sale of state-owned enterprises in metallurgy, oil processing, energy, transport and logistics.

Kazakhstan and Saudi Arabia are also cooperating within multilateral frameworks, including in the Islamic world.

“Kazakhstan plays an important role in the Islamic world through its membership in the Organisation of Islamic Cooperation and the development of the Islamic Organisation for Food Security within the OIC, which was established at the initiative of Kazakh President and which consists of 32 countries,” Alenaze asserted.

The Saudi envoy also noted bilateral cooperation in education, emphasising the need to promote exchanges among young people. Currently, 26 Kazakh students study in Saudi Arabia, but Alenaze said it is crucial to also attract students from Saudi Arabia to study in Kazakhstan.