ASTANA – The world market of robotics, which reached $91.5 billion this year, is expected to climb to $188 billion by 2020. Introducing automated and robotic systems is part and parcel of Kazakhstan’s national industry 4.0 programme, a process scientists from Nazarbayev University (NU) suggest the nation should begin immediately, reported Kapital.kz. 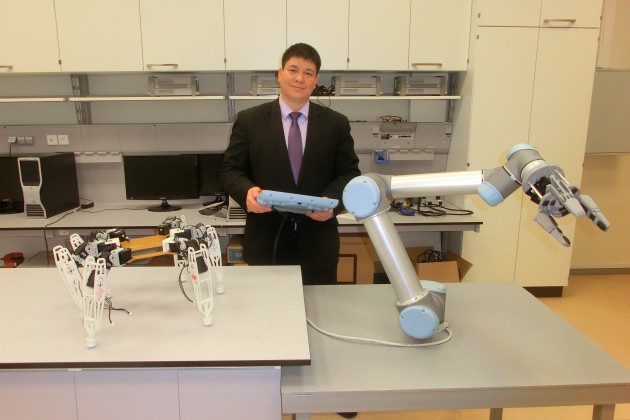 The country can produce the robot manipulators which are already used at SaryarkaAvtoProm car assembly plant in Kostanai and the solar plant in the capital, said NU Robotics and Mechatronics department professor Dr. Almas Shintemirov.

“The biggest problem in robotics is the shortage of qualified specialists. In addition, all components are imported. Even in Russia, not everything is produced; micro motors and micro boards are imported from far abroad. One small micro motor costs $500 and we need at least five for some products, such as, for example, robotic arm prostheses. A good small DC servo drive with integrated digital control costs thousands of dollars. We need six such servo drives to construct an average robot manipulator,” he added, according to the media outlet.

Nazarbayev University has created all the necessary conditions, corresponding infrastructure and hardware equipment to conduct scientific research in the field, but scientists need a research support system similar to their foreign colleagues to implement engineering developments.

Students and scientists abroad make a plastic prototype using a 3D printer and experts in their engineering centre, or machine shop, help them execute technical solutions. Kazakhstan lacks engineering centres and students and scientists must spend a great deal of time on routine engineering work. Gears, motors, sensors and other electronic components are secured through the public procurement system, which requires several months. As a result, scientists prefer buying inexpensive items from online stores with their own money.

“If the certification centres of manufacturing companies were in Kazakhstan, we could train these people here. It would make the services of world manufacturers of robotics even more attractive for our business,” he said.

“First, these are not mass products, but custom-made ones. Second, now the cost of such devices is very high – up to $100,000. All these systems are made abroad. Many of these products did not reach Kazakhstan. In this connection, we have plans to create prototypes of low-cost robotic prostheses. Medical robotics and 3D prosthetics are technologies with high added value, but if these products are designed and manufactured in Kazakhstan, they will be several times cheaper, even with slightly less functionality compared to foreign counterparts. We want to start with a lesser complexity – rehabilitation of the upper limbs. I repeat, this market is still not occupied by anyone, neither in Russia nor in Kazakhstan, and if you systematically deal with the development of this area of ​​robotics, you can go to the forefront,” he said.

“The second direction is production of unmanned vehicles, agricultural machinery and ground mobile robots. The territory we have is huge and the population is relatively small, especially in remote regions and rural areas. There are a lot of mineral deposits. Thanks to drones, it is possible to develop a large number of deposits and to develop agricultural land attracting a minimum of workers following the example of RioTinto in Australia, where unmanned dump trucks in quarries are already operating,” he added.

The university is presently concluding an agreement with Russian KAMAZ to develop a universal unmanned truck based on the company’s new model.

“There is a huge potential for military robotics. For Kazakhstan, military robotics can be extremely attractive: the borders are long, the population is small, and the army is relatively small. So, we need mobile robots to patrol the borders, a system of circular video control,” said Shintemirov.