ASTANA – The Kazakhstan-United Kingdom Investment Forum became the venue Nov. 8 for discussing Kazakhstan’s vast investment opportunities and signing a number of documents between the nations’ institutions. The items included a memorandum of cooperation between Kazakh Invest and the British Chamber of Commerce in Kazakhstan, a memorandum of understanding between Kazakh Invest and the European Bank for Reconstruction and Development (EBRD) and a tripartite agreement among the Astana International Financial Centre (AIFC), the City of London and the London Stock Exchange to train and develop Astana Stock Exchange personnel. 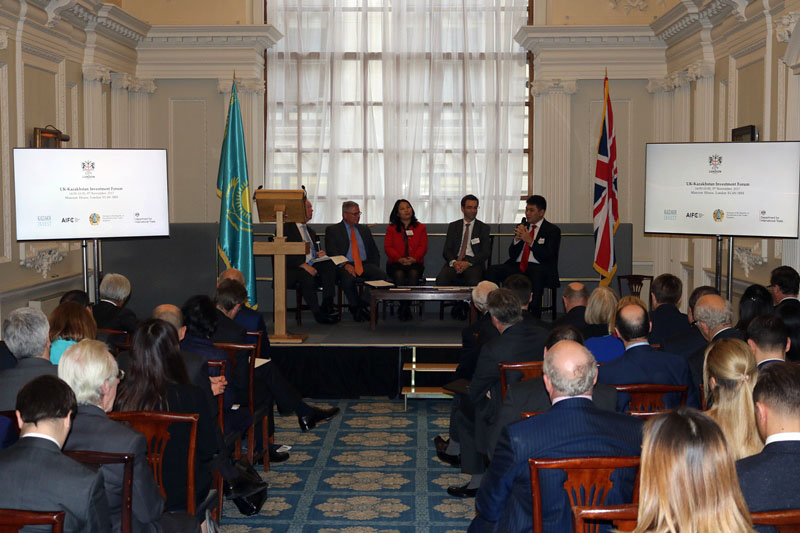 In his speech, Kazakh Ambassador to the U.K. Erlan Idrissov said that in 25 years Kazakhstan and the U.K. have strengthened relations and created a truly strategic partnership. As one of the largest investors in the Kazakh economy, the U.K. has become an important trade and economic partner. He noted the two countries have actively cooperated on a number of priority projects, including establishing and developing both the AIFC and the national privatisation programme, as well as projects within the One Belt One Road Initiative.

AIFC Governor Kairat Kelimbetov noted the financial centre offers a number of privileges for investors, whose contributions will continue to create favourable conditions for attracting investment to Kazakhstan.
“The AIFC has every opportunity to become the gateway to Eurasia, providing trade and financial flows between the countries of the West and the East,” he said.

Kazakh Invest Deputy Chairperson Birzhan Kaneshev outlined new investment opportunities for sectoral and regional projects. Kazakhstan’s national investment strategy has the U.K. as one of the priority countries for attracting investment, he said, adding cooperation between the nations will continue to strengthen.

Lord Mayor of London Dr. Andrew Parmley highlighted the cooperation potential between the U.K. and Kazakhstan both in terms of One Belt One Road and in developing the AIFC. In particular, he noted the City of London is ready to provide the Kazakh capital with as much support as needed for the financial centre to become as large as possible in the region. He added Great Britain could be closely involved in implementing Kazakhstan’s privatisation programme.

The event was jointly organised by the City of London Corporation, the AIFC and Kazakh Invest and was supported by the Kazakh Embassy in the U.K. Attendees included the U.K. Prime Minister’s Trade Envoy to Kazakhstan Baroness Emma Nicholson, head of the EBRD representative office in Kazakhstan Agris Preimanis and heads and representatives of top British transnational companies such as Aggreko, ConnectIreland, International Development Ireland, Metalysis, Sentinel and WilliamHare.