By George D. Gleboff and Aigerim Seisembayeva in International on 21 November 2017

LONDON – Kazakh Foreign Minister Kairat Abdrakhmanov and British Secretary of State for Foreign and Commonwealth Affairs Boris Johnson during a Nov. 20 meeting in London agreed to expand cooperation on the trans-Eurasian transport corridors and reviving the Silk Road corridor. 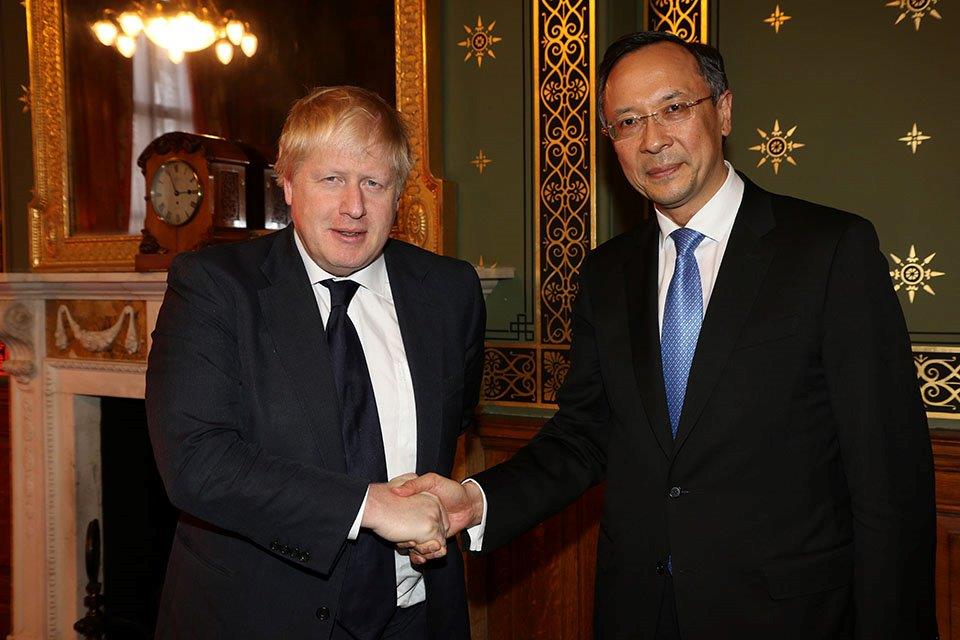 They also discussed global issues, the Kazakh foreign ministry announced, including the priorities of Kazakhstan’s chairmanship in the UN Security Council in January 2018, the Astana Process on Syria, the situation in Afghanistan, the implementation of the Minsk agreements on Ukraine, countering terrorism, non-proliferation of weapons of mass destruction and cooperation in Central Asia, among other issues.

“Kazakhstan will be the first Central Asian nation to chair the UNSC. Looking forward to further cooperation on global security,” Johnson tweeted following the meeting.

The discussions took place as part of the Kazakh-British Strategic Dialogue at the British Foreign Office. The bilateral agenda for the upcoming months also includes meetings of the Kazakh-British Intergovernmental Commission, the Business Council and other events involving the Samruk Kazyna National Wealth Fund, the Astana International Financial Centre (AIFC) and the Kazakh Invest national company.

Abdrakhmanov and Johnson also touched on meetings between Kazakh President Nursultan Nazarbayev and British Prime Minister Theresa May, including at the G20 summit in China in 2016 and Nazarbayev’s November 2015 London visit which resulted in agreements worth $12 billion.

“Kazakhstan will continue strengthening its strategic partnership with Great Britain in order to modernise the economy and increase investment and trade exchange based on the agreements at the highest level,” Abdrakhmanov said, adding the United Kingdom plays an important role in Kazakhstan’s economic development.

Britain is one of Kazakhstan’s major trading partners and one of the six largest investors in the Kazakh economy with more than $12 billion invested so far. Bilateral trade in 2016 was $1.2 billion and more than $1 billion in the first nine months of 2017.

Abdrakhmanov’s meeting with Johnson was part of his visit to Britain during which the Kazakh Foreign Minister also met with the leadership of Metalysis company, which is implementing a high-tech project in Kazakhstan, and TheCityUK, which is cooperating with the AIFC.

In addition, Abdrakhmanov attended the annual meeting of the Eurasian Council on Foreign Affairs (ECFA) Advisory Council. The council was founded in 2014 and is an independent think tank studying Central Asian states’ development and relations with European countries.

“Kazakhstan is working hard to improve the investment climate further and is interested in expanding investment cooperation with European companies, including British ones,” said Abdrakhmanov.

He stressed Kazakhstan ranked 36th in the World Bank’s Doing Business report this year, while the European Union is Kazakhstan’s largest trade and economic partner and investor, which on average accounts for up to 50 percent of trade and investment into the Kazakh economy.

The annual meeting of the ECFA Advisory Council discussed the conceptual approaches to the development of relations between Kazakhstan and other Central Asian countries with Europe and cooperation in transport, logistics, energy and financial technology. Participants stressed Kazakhstan’s geo-economic location in the heart of Eurasia, its efforts to develop transit and key role for the implementation of the Belt and Road Initiative (BRI).