By Anuar Abdrakhmanov in Sports on 29 November 2017

ASTANA – Galina Vishnevskaya and Maxim Braun of Kazakhstan made history when they claimed Kazakhstan’s first third place in the single mixed relay at the International Biathlon Union’s (IBU) World Cup stage in Ostersund, Sweden on Nov. 26. 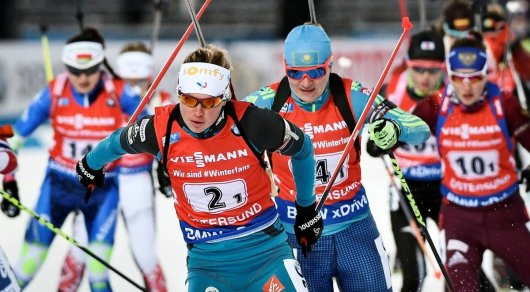 “Before the race, my coach Valery Polkhovsky told me to stay in the crowd and not try to get out of it. But everyone went not too fast in the first round, and I thought I could take the lead. The skiing was very smooth, so I decided I could try to set the pace for my opponents. But I skipped a beat at the shooting stage. It turned out I was not used to coming first to shooting. I was very nervous and struggled to lay down and hold the first shot, to at least calm down a bit,” Vishnevskaya said after their victory.

“It was a fantastic start of the season. Kazakhstan has achieved such great success for the first time in history. We are very happy. We did a great job this summer. I cannot say we were ready to enter the top three, but we did a lot for this and fought until the very end. Luck was on our side. Thanks to everyone who supported and cheered for us,” Braun added.General Secretary of the Kazakhstan Biathlon Union Manas Ussenov commented on the historical achievement of the country’s athletes.

“This is the first medal in the relay race at the World Cup stages in the history of Kazakhstan’s biathlon. Our athletes beat the team of France, which was represented by two-time Olympic champions and medallists. We are very happy for our biathletes and for the whole team,” he said.