By Anuar Abdrakhmanov in Sports on 8 November 2017

ASTANA – FC Astana came out on top of Kazakhstan’s Premier League for the fourth time in a row with a 2-0 victory over Akzhayik of Uralsk on the last day of the season. 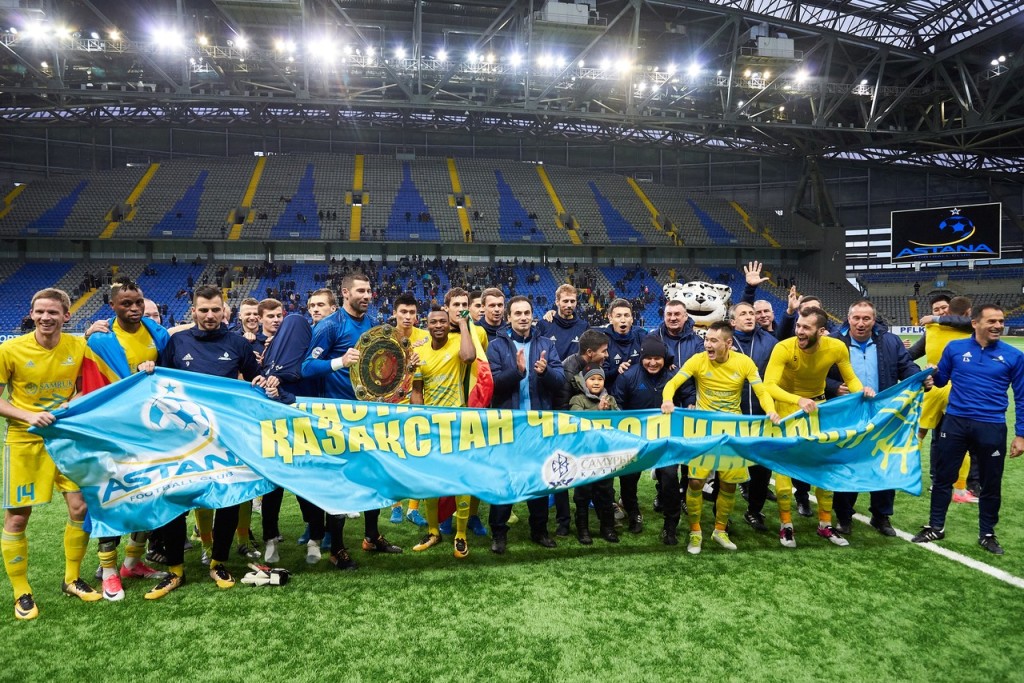 The reigning champions could have secured the defence of their title earlier, but they lost 0-2 at home to Kairat in the previous round, making their Nov. 5 match a must-win.

That did not, however, appear to be a mission impossible, as FC Akzhayik Uralsk ranks only 10th in the league’s standings. However, three days before their Kazakhstan Premier League match, Astana faced serious challenger Macccabi Tel Aviv in their UEFA Europa League group competition, so there were doubts about whether the players would have enough time to recover to face their domestic opponents. To FC Astana’s good fortune, the match turned out to be predictable. Throughout the 90 minutes Astana had a clear advantage and won confidently, giving the home fans another reason to celebrate.

“Becoming the champions for the fourth time in a row is a great achievement. I would like to thank those who believed in us – and those who did not as well – but I think we proved that we are the best in the country,” Astana defender Dmitry Shomko said after the result.FC Astana head coach Stanimir Stoilov has now become the first person in the history of Kazakh football to lead his team to victory in the national league four years in a row.

“Today’s game clearly showed that we were the stronger side. The question was when we would score. I am happy we won the championship. We worked hard throughout the year, and I am glad it paid off. A rare football club can win the national championship for four years in a row. This is a great achievement for the whole club, and I want to congratulate our fans with it,” he said.

“The winner was decided in the last round, and that held everyone in suspense. But we believed in our team and our strengths, and deservedly won the gold medals! Making it through to the group stage of a European club competition and winning the domestic champions title were our main objectives for this season. I congratulate the players of the club, the coaching staff, the employees and specialists of our football centre and all our many fans in Astana, in Kazakhstan and all over the world!” said FC Astana General Manager Sayan Khamitzhanov.

FC Kairat Almaty lost the Premier League title by just one point, despite their 3-2 win over FC Aktobe in a parallel match, and once again had to content themselves with silver medals.

The two teams that finished at the bottom of the standings, FC Taraz and FC Okzhetpes Kokshetau, were relegated from the Premier League. FC Zhetysu Taldykorgan and SK Kyzyl-Zhar Petropavl will replace them, having won promotions from the first league. Akzhayik, which finished 10th, will have to defend its place in the top flight in a Nov. 9 playoff match against FC Makhtaaral, representing Kazakhstan’s southernmost township.

The results mean that FC Astana will try its luck again in the UEFA Champions League qualification round next summer, while Kairat, Ordabasy and Irtysh will do the same in the UEFA Europa League.