By Anuar Abdrakhmanov in Sports on 7 November 2017

NETANYA – In the fourth round of the UEFA Europa League’s group stage, FC Astana secured its first away win in a group tournament of a European cup. In Netanya, the Kazakh club defeated Maccabi Tel Aviv 1-0 and moved up to second place in Group A. 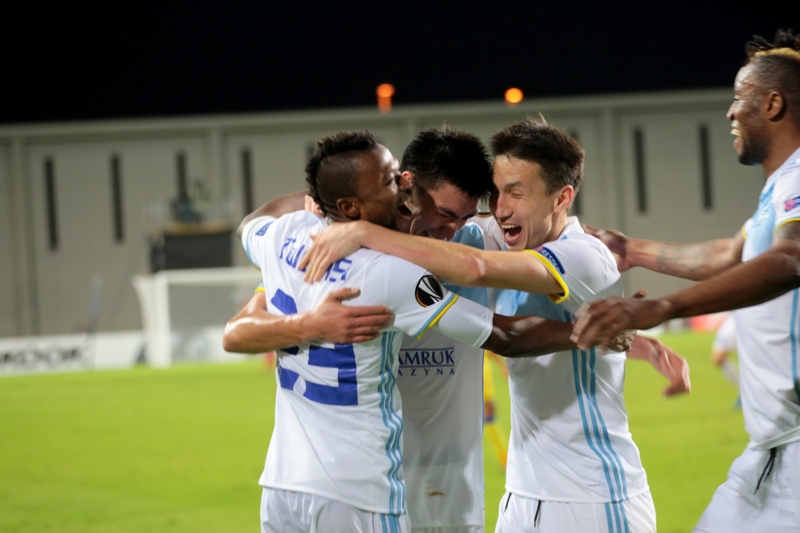 Understanding that the Israeli club would be gunning for revenge after the major defeat they suffered Oct. 19, FC Astana head coach Stanimir Stoilov initially decided to keep a lower profile, choosing a strategy using three central defenders. This was a serious risk, as before the game the Kazakh capital’s club’s key defender Yuriy Logvinenko was injured, forcing the team’s defence to experiment with a new line-up. Another problem was the absence of Bosnian midfielder Srdjan Grahovats, who fell ill on the day of the match and was replaced by Askhat Tagybergen.

The first half of the match was nerve-racking. Astana couldn’t seem to find their game, and Maccabi had several chances to score. However, Kazakhstan’s defenders and goalkeeper Nenad Eric managed to avert all the threats.

In the second half, Maccabi continued to pressure, but not as hard as in the first half. Astana, waiting for a moment to seize the initiative, finally found one and opened the score: defender Dmitry Shomko made a backdoor pass and striker Patrick Twumasi sent the ball into the hosts’ net, but the referee called offside and the goal was disallowed. A few minutes later, however, Twumasi scored again, this time assisted by defender Abzal Beisebekov. 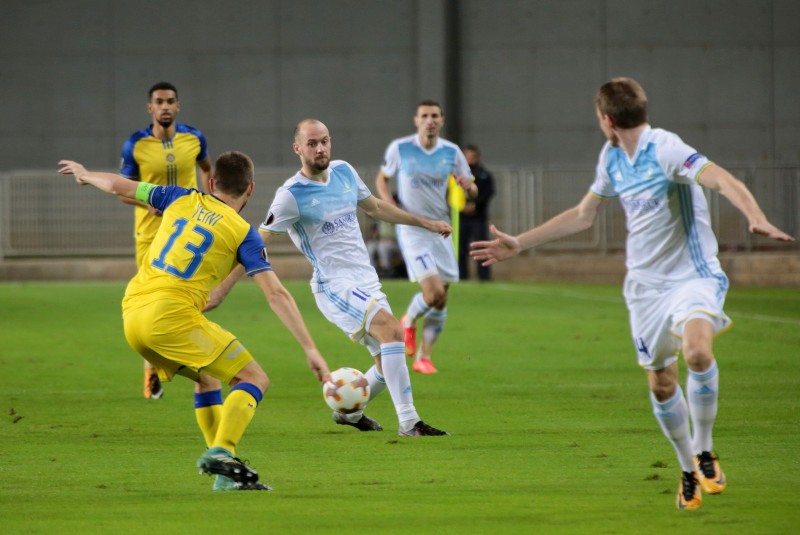 Maccabi rushed forward, weakening their defence, and narrowly escaped being scored on again. Kazakhstan arranged another dangerous counterattack with defender Sergei Maly meeting a cross from Twumasi, but Maccabi goalkeeper Predrag Rajkovic turned the ball away. The Israeli club kept attacking, but Astana was resilient and came away with the historic win. As a result of the match, FC Astana moved to the second spot in Group A. With seven points, the Kazakh team is one point behind the pool’s Spanish favourite, Villarreal CF, which defeated Slavia Prague 2-0 in the group’s other match.

“I am happy with our first away win in group stage of a European cup. We worked hard this season and took a step forward. To be honest, Maccabi was better in this game. I think our opponent played good football. We were lucky in some moments. We waited for our chance and used it in a counterattack. We dedicate our victory to the football of Kazakhstan. Yes, we still need more points. I think if we secure 10 points, we will [progress to the playoffs stage]. We need another win, either over Villarreal or Slavia. If we make it out of the group, this will be obvious progress for us,” Stoilov commented after the game.

“I think discipline helped us win. We did what the manager told us to do. He said it was important to play tight, without giving the opponent a chance. That is what we did. We used the chance. We surely could increase our advantage, but this result is good enough,” Shomko added.

“The game was very difficult because we realised Maccabi would use a different tactic and focus on attacks at home. We prepared for playing defensively. After all, away matches are always very difficult. The main task was to play tight without leaving any zones between the lines. The team needed to act as a single mechanism. We had some lucky moments, because Maccabi had a lot of scoring chances, and we used one of counterattacks and won. Everyone is very happy tonight,” Astana midfielder Ivan Majewski concluded.