FC Astana loses 2-3 to Villareal at home, must win in Prague to progress in Europa League

By Anuar Abdrakhmanov in Sports on 29 November 2017 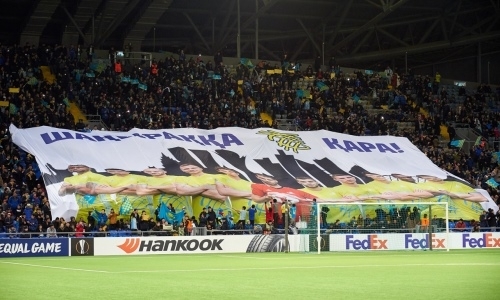 Should the team win in Prague next month and Maccabi Tel Aviv prevail over Slavia Prague, Astana could secure an advance from the group.

The Spaniards were the clear favourites ahead of the match at Astana Arena. It was no surprise that from the very first minutes the visitors attempted to dominate the pitch. As early as the 17th minute, Nicola Sansone went one on one with Astana’s goalkeeper, but Nenad Eric deflected the first strike and defender Yuri Logvinenko repelled the follow-up.

The Kazakhs gradually managed to cope with the visitor’s starting attacks and then implemented its first real scoring chance. Midfielder Patrick Twumasi won a struggle for the ball with the Spanish team’s defender and passed it to striker Junior Kabananga. The DR Congo footballer made a brilliant strike and opened the score.

Almost immediately, Villarreal midfielder Pablo Fornals took advantage of the Kazakh defence’s mistake and went one on one with Eric, but the goalkeeper saved his team again. After a long ball, Astana midfielder Abzal Beisebekov quickly sent the orb into the opponent’s penalty area and passed it to Twumasi. Against all odds, Villarreal goalkeeper Mariano Barbosa managed to repel the shot to the corner with his fingertips.

The visitors equalised the score before halftime, as midfielder Daniel Raba ran away from the defenders and beat the goalkeeper.

Substitute forward Cedric Bakambu, who scored in the first match between the teams, distinguished himself again this time, making it into the penalty area and beating Eric. A bit later, his fellow countryman took advantage of the Astana defenders uncoordinated actions and shot from the penalty line to the corner of Eric’s net, extending his team’s advantage.

Astana did not give up and continued trying to curb the deficit. Three minutes before the end of the match their efforts bore fruits. Midfielder Igor Shitov won the fight for the ball in the opponent’s penalty area and passed it to Twumasi, who made an accurate shot, setting the final score at 2-3.

“It was an interesting match. Our unbeaten series is over. Still, it is a great achievement when the team does not lose 17 home games. As for the match, I would say we lacked some dynamics and speed. We made many mistakes in defence. In some moments we had to be more aggressive. Our main problem, in my opinion, was the right mindset and rhythm for the game. The players [perhaps] did not have enough desire to win,” said Astana coach Stanimir Stoilov.

“I think Villarreal deserved this win. It is a very good team. The stadium was full and I would like to thank our fans. It is a pity we could not make our fans happy today. It is difficult now to find the reasons for what happened. We had a long break, as we did not play for more than 18 days. That is why it was hard… Now, we must prepare well for our next match in Prague,” said Eric.

Slavia, Astana’s key rival for the second spot in the group, secured a 2-0 win in Israel and the Czechs now have a clear advantage ahead of their decisive home match Dec. 7 with the Kazakhs. The game is a must-win for Astana to secure its first-ever progress from the European club group stage competition.