By Aigerim Seisembayeva in International on 11 November 2017

ASTANA – Foreign ministers of Kazakhstan, Kyrgyzstan, Tajikistan, Turkmenistan and Uzbekistan signed Nov. 10 in Samarkand a programme of cooperation between the Ministries of Foreign Affairs of Central Asian States for 2018-2019. 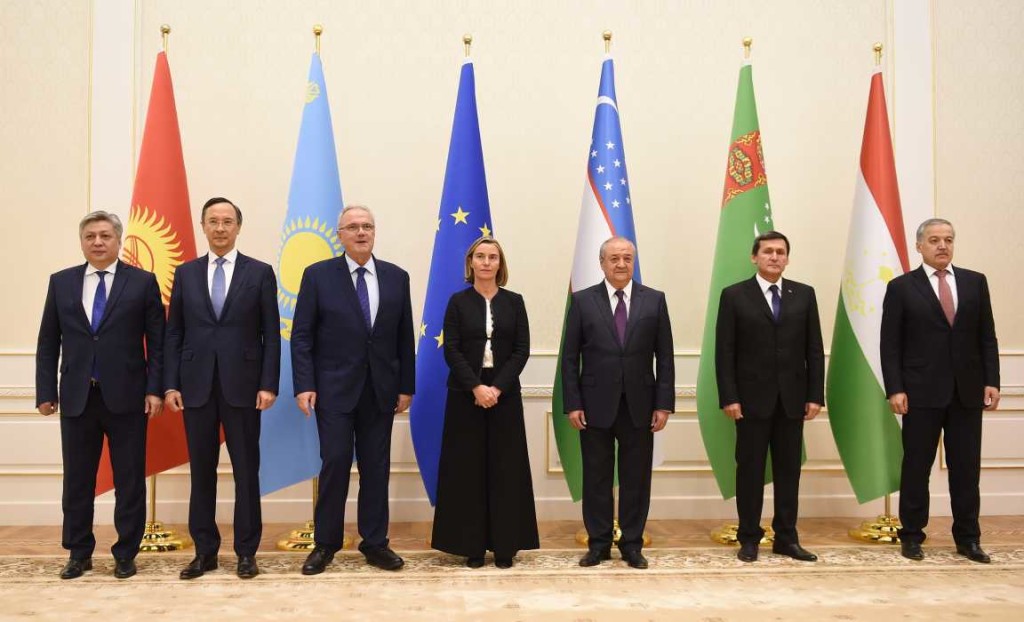 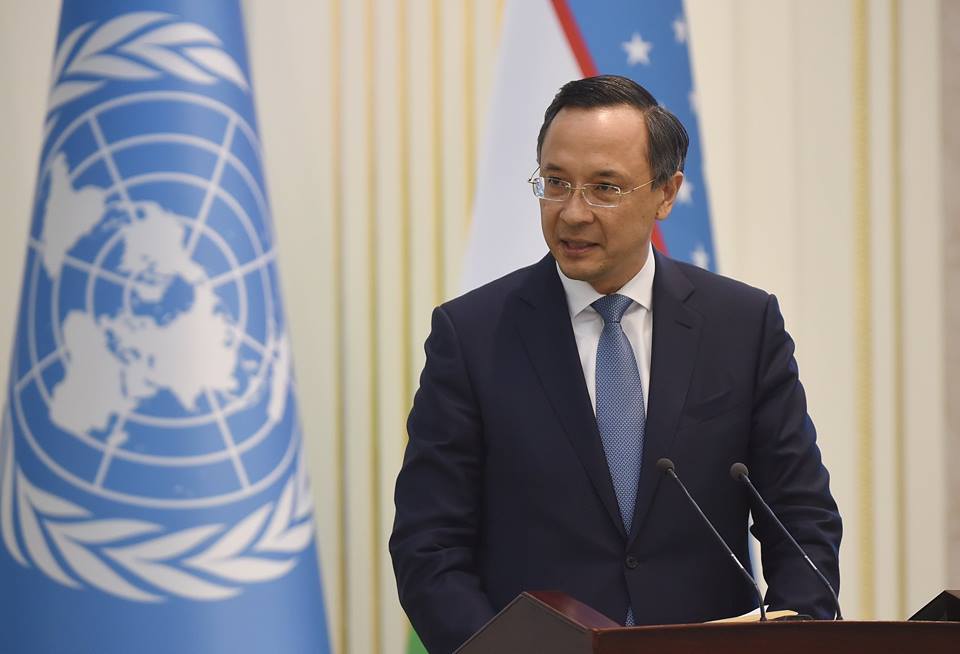 Along with the Central Asian foreign ministers, the heads of the foreign ministries of Afghanistan and Iran, the European Union High Representative for Foreign Affairs and Security Policy Federica Mogherini, heads of secretariats of international organisations, scientists and NGOs took part in the conference under the UN auspices.

Kazakhstan stands for the creation of a model of a regional zone of peace, security and cooperation in Central Asia and Afghanistan, Kazakh Foreign Minister Kairat Abdrakhmanov said at the conference. 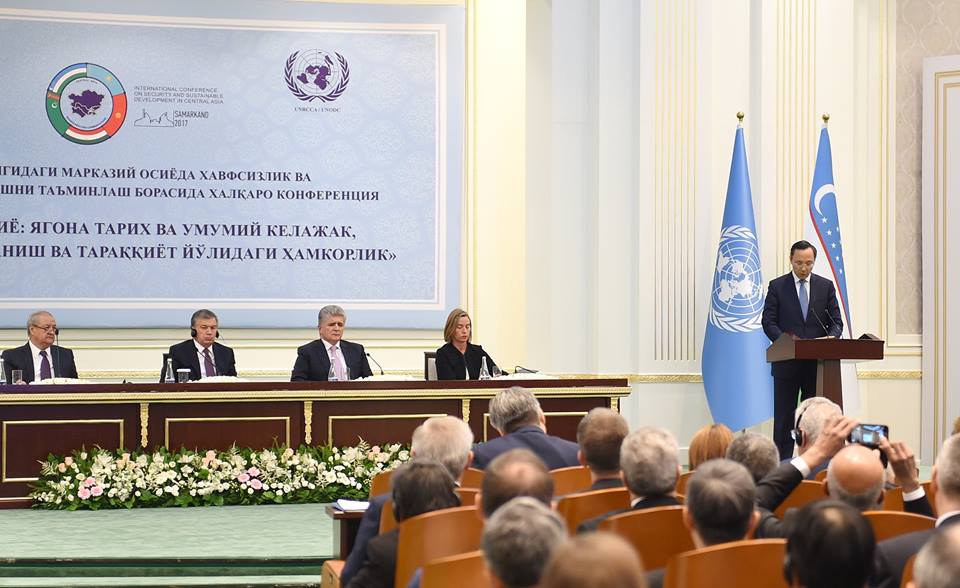 “Since gaining independence more than 25 years ago, President of Kazakhstan Nursultan Nazarbayev has been actively promoting the policy of regional integration that takes into account the interests and expectations of all the states of the region. Today, this process receives a new impetus, as we observe a surge of regional contacts at all levels,” he stressed, noting that Kazakhstan welcomes the initiative to hold regular meetings of Central Asian leaders. Such an idea was voiced by Uzbek President Shavkat Mirziyoyev as he opened the conference, and Abdrakhmanov said President Nazarbayev was considering inviting his colleagues to Astana for such a meeting during the Nauryz celebrations.

Abdrakhmanov stressed that security and stability are interlinked with sustainable development at the national and regional levels. Kazakhstan assumes stable models of economic and social progress, stable political institutions prevent the spread of common threats and challenges such as terrorism and extremism, drug trafficking, organised crime, illegal migration and human trafficking. A joint regional approach helps overcome natural disasters and catastrophes, including the tragedy of the Aral Sea and the use of trans-boundary water resources, he noted.

“That is why President Nazarbayev proposed in his policy address to the UN Security Council in early 2017 the creation of a model zone for peace, security and cooperation in Central Asia and Afghanistan, from where the spirit of trust and cooperation will extend to neighbouring countries and regions,” he said.

Abdrakhmanov noted some elements of such a zone already exist, including cooperation within the International Fund for Saving the Aral Sea, the Nuclear-Weapon-Free Zone, the Central Asian Regional Information and Coordination Centre (CARICC) among others.

In this regard, Kazakhstan offers a comprehensive approach based on three principles: the security-development nexus, the regional approach, and the coordinated efforts of UN agencies and institutions.

Abdrakhmanov also noted Kazakhstan supports the decision of the European Union to update the EU Strategy for Central Asia. The document is expected to be elaborated by the end of 2019 and establish priorities for further cooperation.

In developing the new EU Strategy for Central Asia, Kazakhstan proposes to focus on increasing the impact of the document, in particular, the preparation of projects with results that will strengthen region’s potential.

Speaking about the development of transit and transport potential, the minister noted that Central Asia should not remain simply a transit region. The EU’s experience and assistance should be used to help diversify Central Asian economies and in-demand high-tech industries.

The meeting of the EU-CA Foreign Ministers in Samarkand resulted in the adoption of a joint communiqué which outlined the mutual vision of further cooperation.

In Samarkand, Abdrakhmanov met with Mogherini, as well as the European Commissioner for International Cooperation and Development Neven Mimica. The meetings particularly focused on assistance to Afghanistan and Kazakhstan’s official development assistance projects, which allocated more than $450 million over the past several years.

Another important event was the signing by the foreign ministers of Kazakhstan, Turkmenistan and Uzbekistan of an agreement on the area of the junction point of the state borders of the three states. The agreement is part of the completion of one of the stages of international legal formalisation of the state border between Kazakhstan, Turkmenistan and Uzbekistan and will create a solid basis for strengthening mutual respect, sovereign equality and the territorial integrity of the three bordering states.

“Since the first days of independence, President Nazarbayev paid close attention to the delimitation of the state border. In fact, this is a matter of responsible state-building and security of the country. The trilateral agreement signed today is largely historical for Central Asia, since it finalises the legal registration of the state borders of our three states,” Abdrakhmanov said after the signing ceremony.

He also met separately with his Kyrgyz counterpart Erlan Abdyldayev to discuss regional and bilateral cooperation and integration within the Eurasian Economic Union. They also affirmed their desire to strengthen bilateral relations and resolve trade and economic issues.